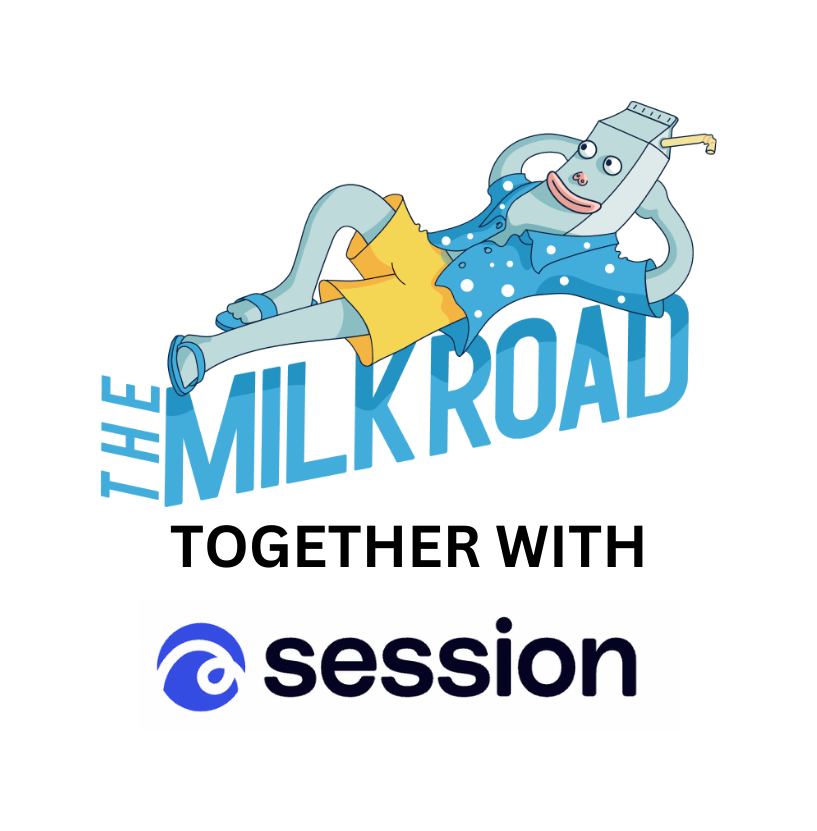 GM. This is the Milk Road. The newsletter that brings you the best of crypto every. single. day. 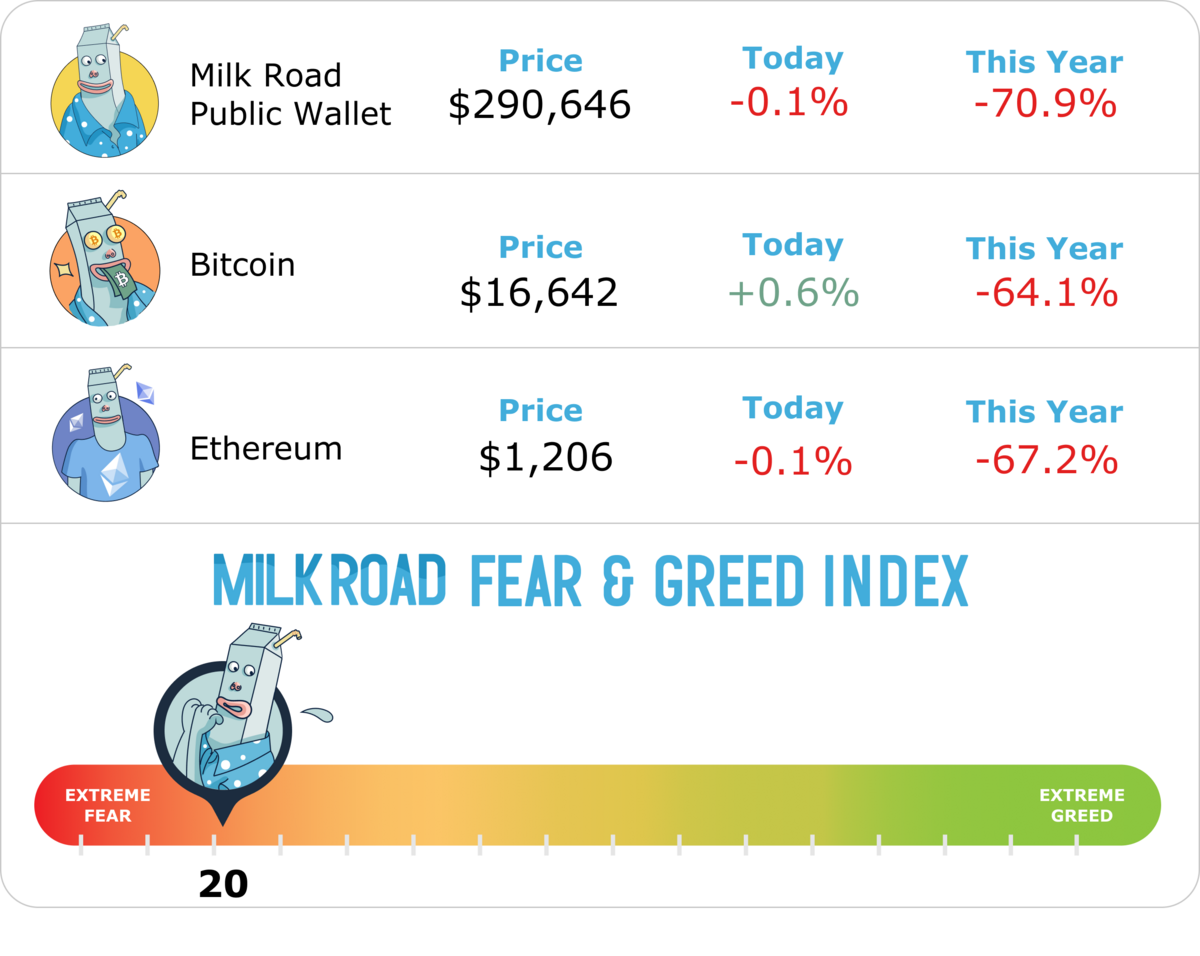 Did we want to write about FTX today? No.

Did more crazy stuff happen in the last 24 hours? You bet.

The FTX saga is the gift that keeps on giving.

The drama that keeps on drama-ing.

Just when you think it can't get any crazier... BOOM! You get punched in the mouth with more. It's one long OxiClean infomercial.

Yesterday we got our eyes on some *leaked* DMs. And everyone knows... it goes down in the DMs.

Who were the DMs between? Samuel and Kelsey Piper (writer at Vox).

Samuel talked about everything from his biggest regrets to his real thoughts about ethics.

There were a total of 22 screenshots from their convo and Kelsey released them all in her latest piece.

Here are the top 5 moments that had the Milk Man's jaw drop to the floor. 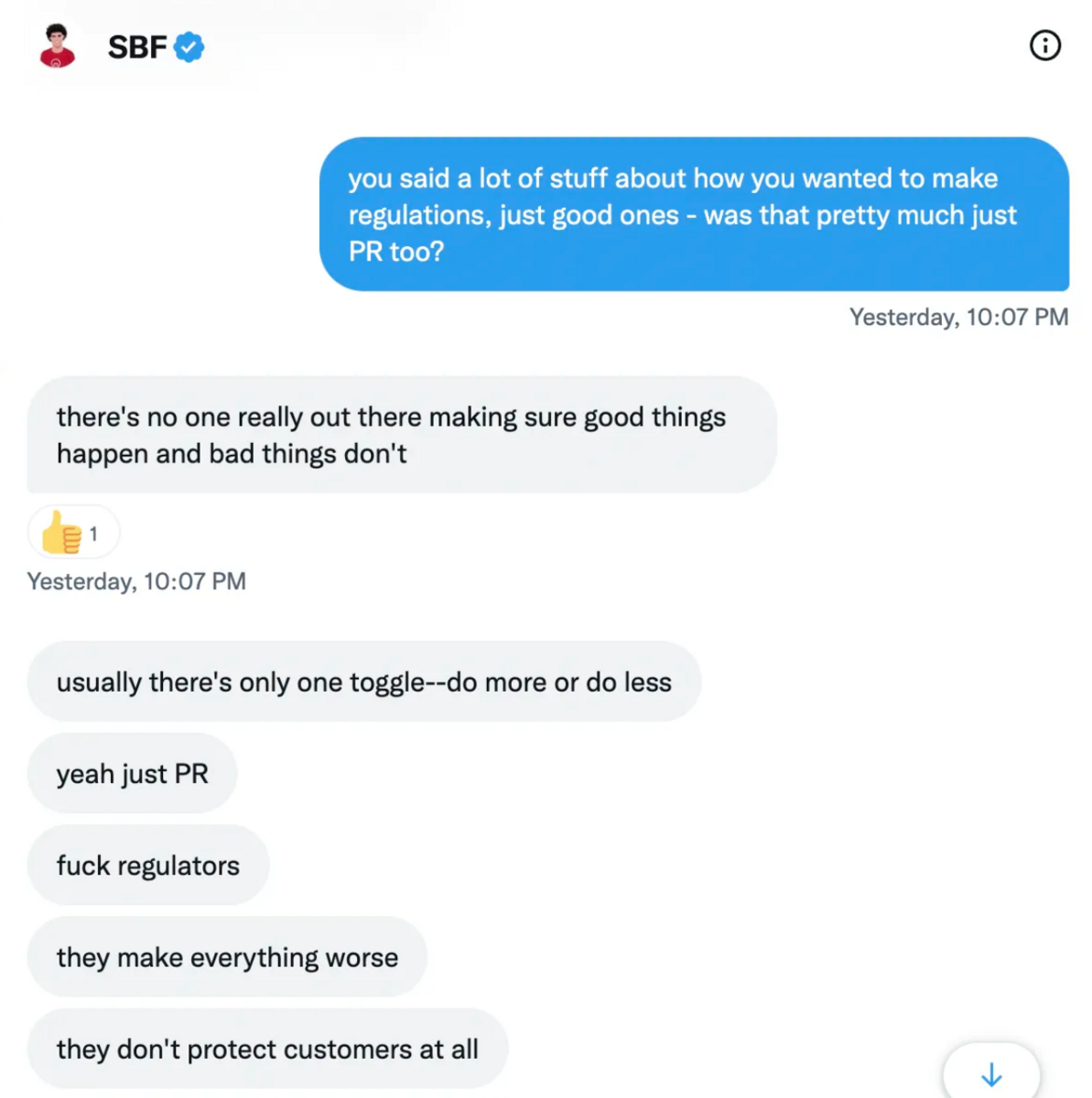 Samuel was in D.C. every week meeting with regulators. He was testifying in front of Congress, co-sponsoring bills, and becoming BFFs with politicians.

Turns out, it was all a PR stunt.

How does he really feel? "F*ck regulators"

**Milk Road P.S.A to All Regulators - Samuel is not one of us. Please don't hurt us. 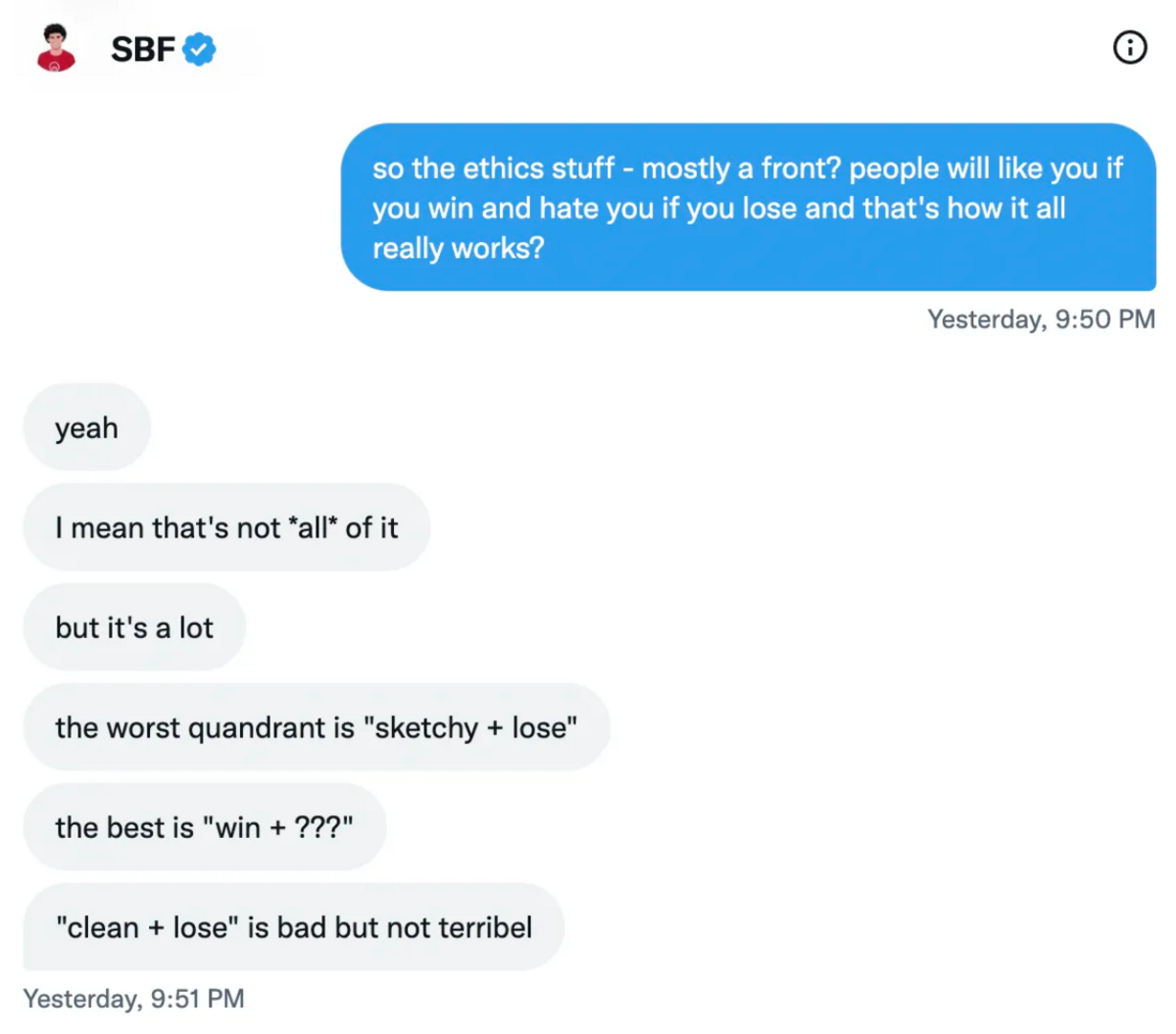 It was all just a front for Samuel.

And would you look at that... he even created his own ethics matrix. We drew it out for you. 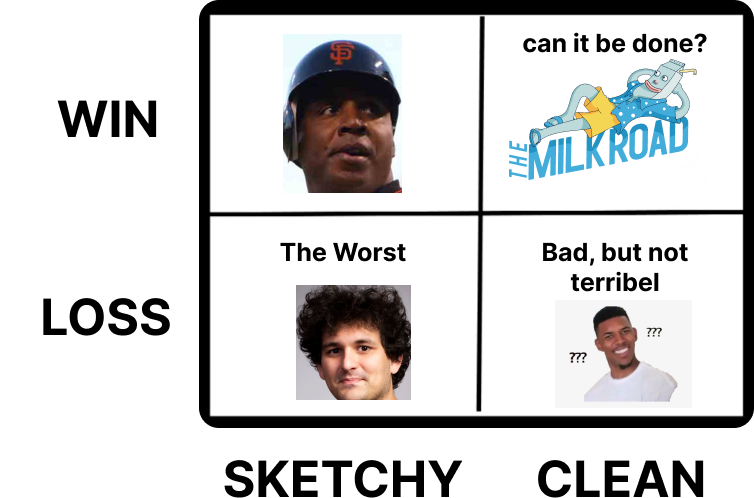 He later goes on to say that he had to be good at talking about ethics.

"I feel bad for those who get f*cked by it. By this dumb game we work westerners play where we say all the right shibboleths and so everyone likes us".

And there it is... Samuel saying the quiet part out loud. 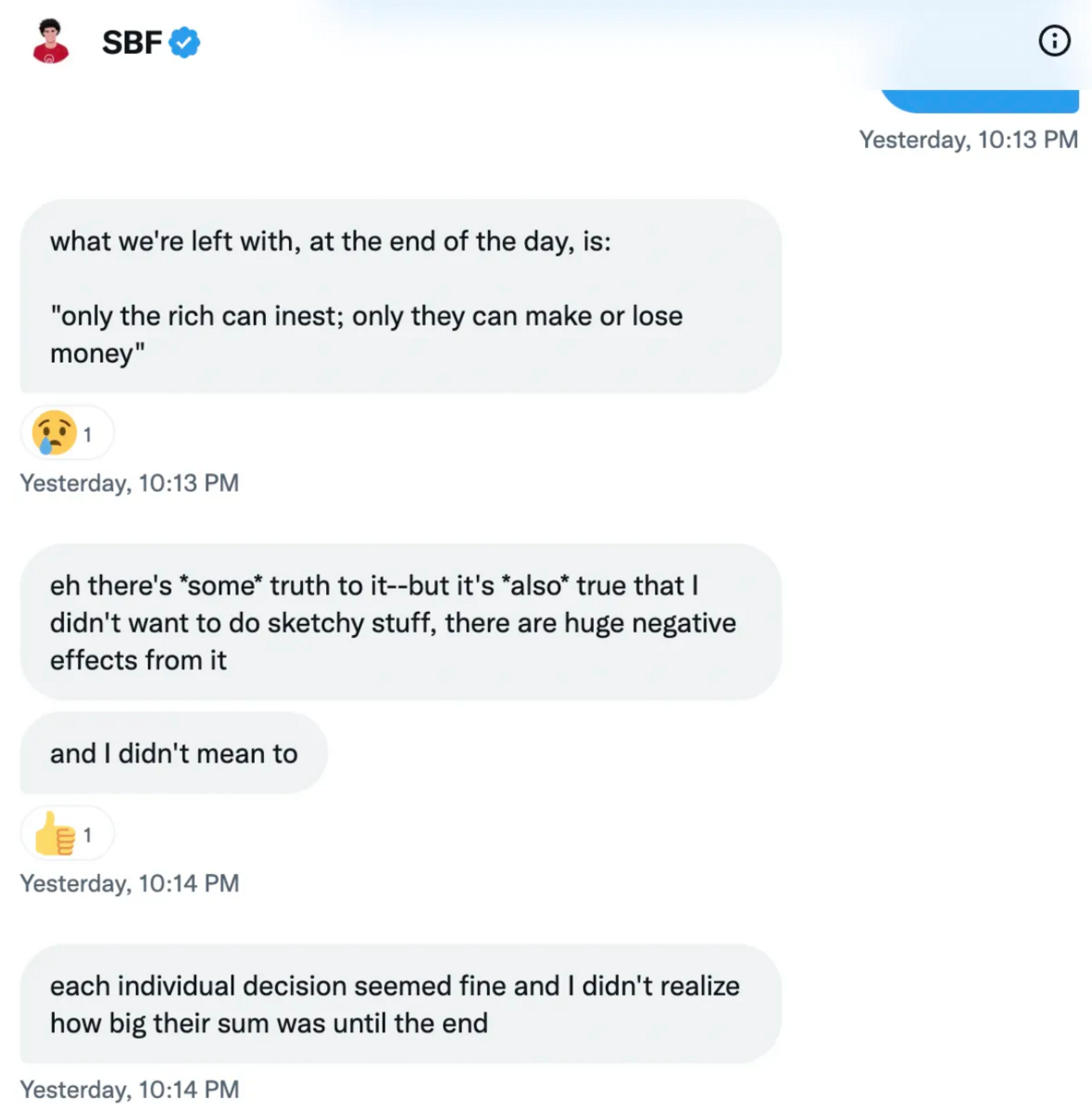 Turns out Samuel thinks about taking money from customers the same way I think about eating Oreos.

In the moment, a row of Oreos a day seems fine.

But by the end of the month, you've gained 30 lbs and can't fit into your pants.

In this case, Samuel took a few hundred from customers. And before he knew it, he was $16b deep in theft.

This is where Samuel turns into "Technically Tyler" (aka that one friend that corrects everything you say with "well, technically...") 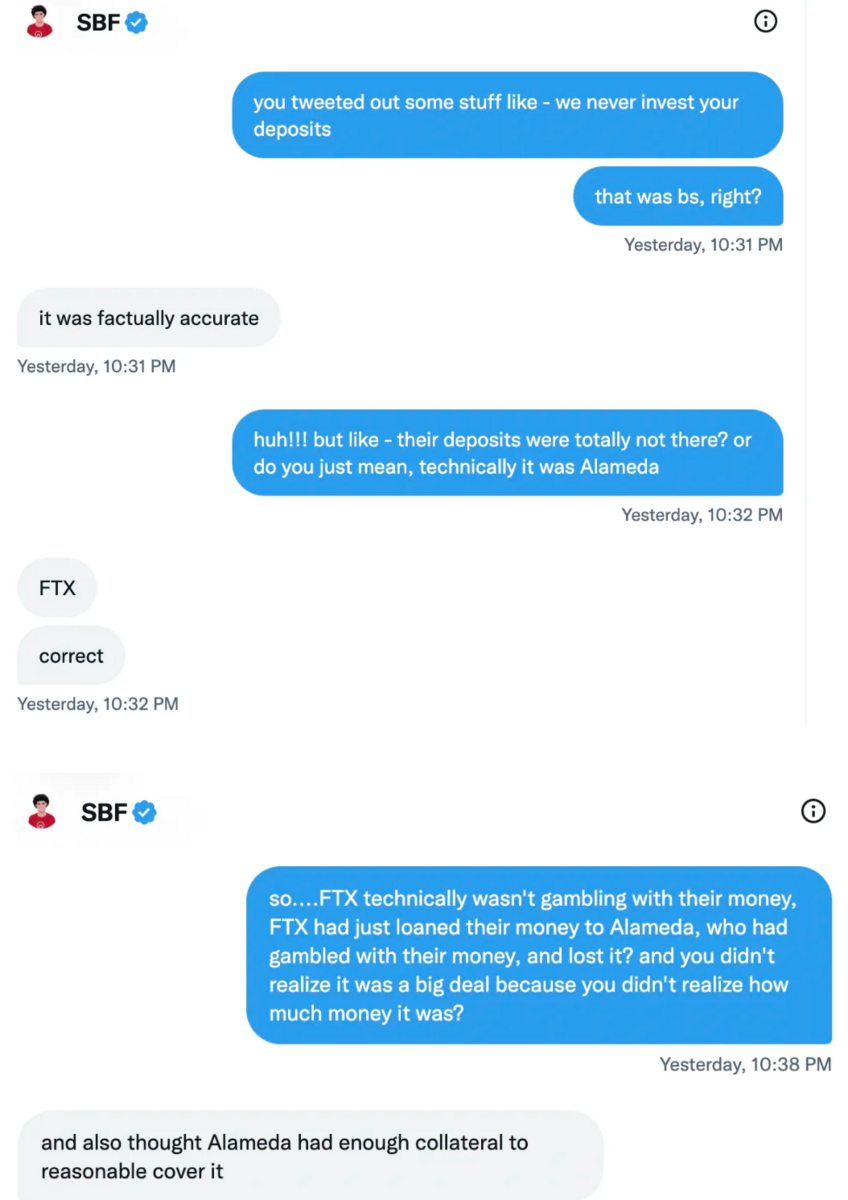 According to Samuel, it was technically Alameda that was investing customers' funds, not FTX.

Now I know what you're thinking...

So is Samuel still to blame for it all? Factually accurate.

5/ Samuel on his biggest regret

Is it taking customers' money? No.

Is it lying to everyone? Nope.

Is it growing an ugly fro? Nah.

His biggest regret is... 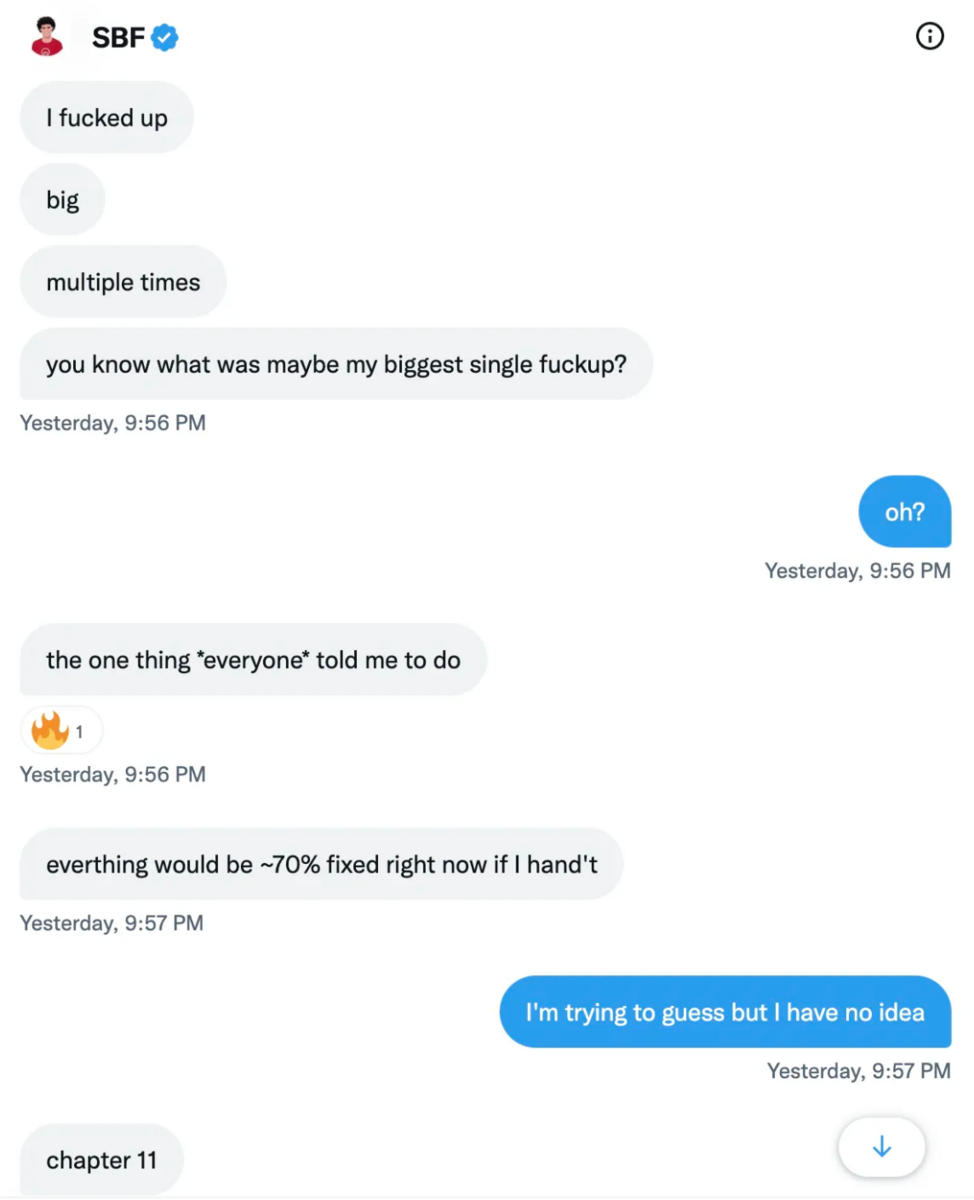 Why? Samuel claims that if he didn't do this...

Wow. This just might take the pie for the "Craziest Convo of the Year".

The Milk Man is no doctor. But he did just graduate from WebMD. And according to him...

Samuel shows all the signs of a sociopath.

TODAY'S EDITION IS BROUGHT TO YOU BY SESSION

I’ll admit it… I hate Zoom.

It’s boring. Lacks tools to help with engagement. And doesn’t have much analytics behind it.

Well, say hello to Session - a new video platform from Hopin that has all the tools you need to build community experiences. It lets you:

The best part? The Milk Road will be hosting our own event on Session in the upcoming weeks. You really don't wanna miss out.

Interested in joining an AMA with the Milk Man and the rest of the Milk Road Crew? Reply to this edition with your email and we'll add you to the Milky VIP list.

Celebrities like Tom Brady, Larry David, Shaquille O'Neal, and others are all being sued for endorsing FTX.

US House and Senate announce hearings on the FTX collapse. What have you done, Samuel?!

MILKY MEMES TO MAKE IT ALL BETTER

DISCLAIMER: None of this is financial advice. This newsletter is strictly educational and is not investment advice or a solicitation to buy or sell any assets or to make any financial decisions. Please be careful and do your own researchBut