GM, this is the Milk Road. The friend who’s saving you a seat at the crypto lunch table (with our leg, not just a backpack).

Let’s talk about the “p word.”

This year has been rough for crypto prices. We’ve been down all year, but today, ladies…TODAY IS OUR DAY.

We’re back in the green for the first time year-to-date (YTD)! 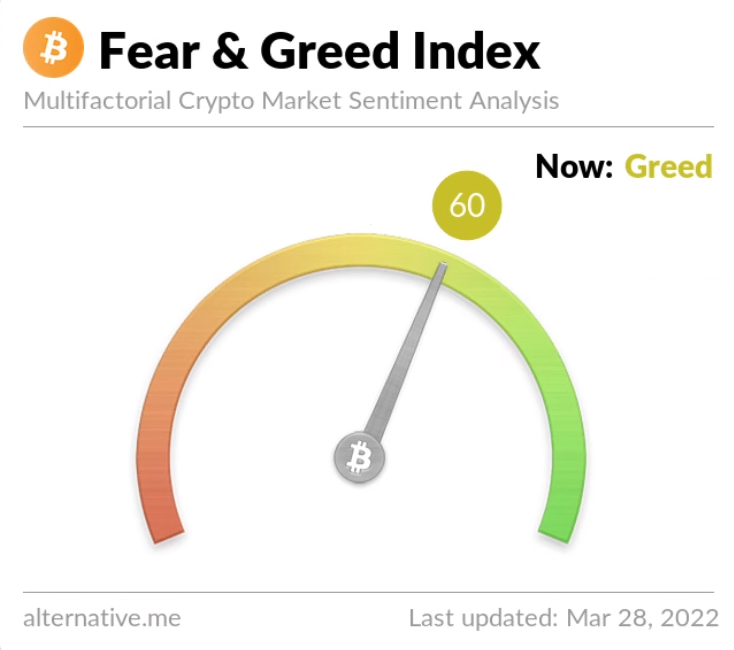 Wanna get caught up on what everyone's talking about?

BITCOIN IS MORE POPULAR THAN GOLD FOR U.S. INVESTORS

This survey is kind of amazing. 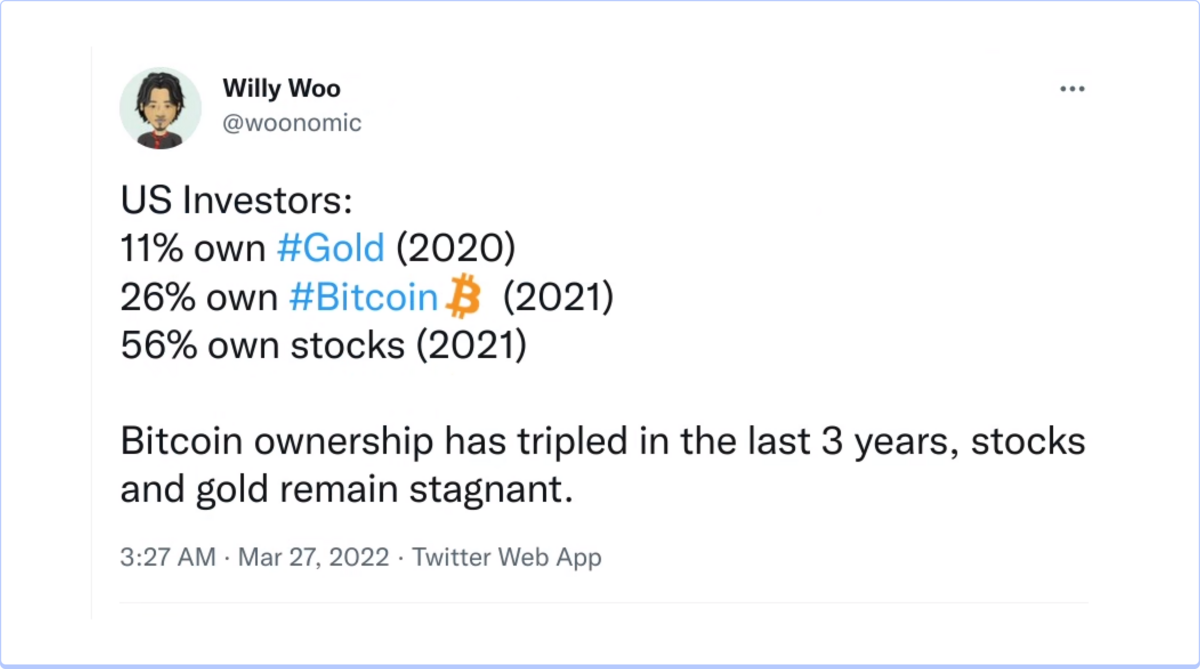 Bitcoin is often called “Gold 2.0” or “Digital Gold.” And people are speculating if it will ever be as popular as gold is.

Well, according to this survey: 2x more people already own Bitcoin vs. Gold.

Now, the survey only had 1,000 people, and these stats can be deceiving, but it’s a positive signal worth watching.

One of the biggest risks for crypto is “the government.”

The government is like the big bad wolf, and people are worried it’s about to huff, puff, and blow our house down. But if enough people own crypto - then it’s going to be political suicide to go against crypto.

That’s a big and growing group that has skin in the game. If a politician tried to drop the hammer on crypto, they would make a lot of enemies. 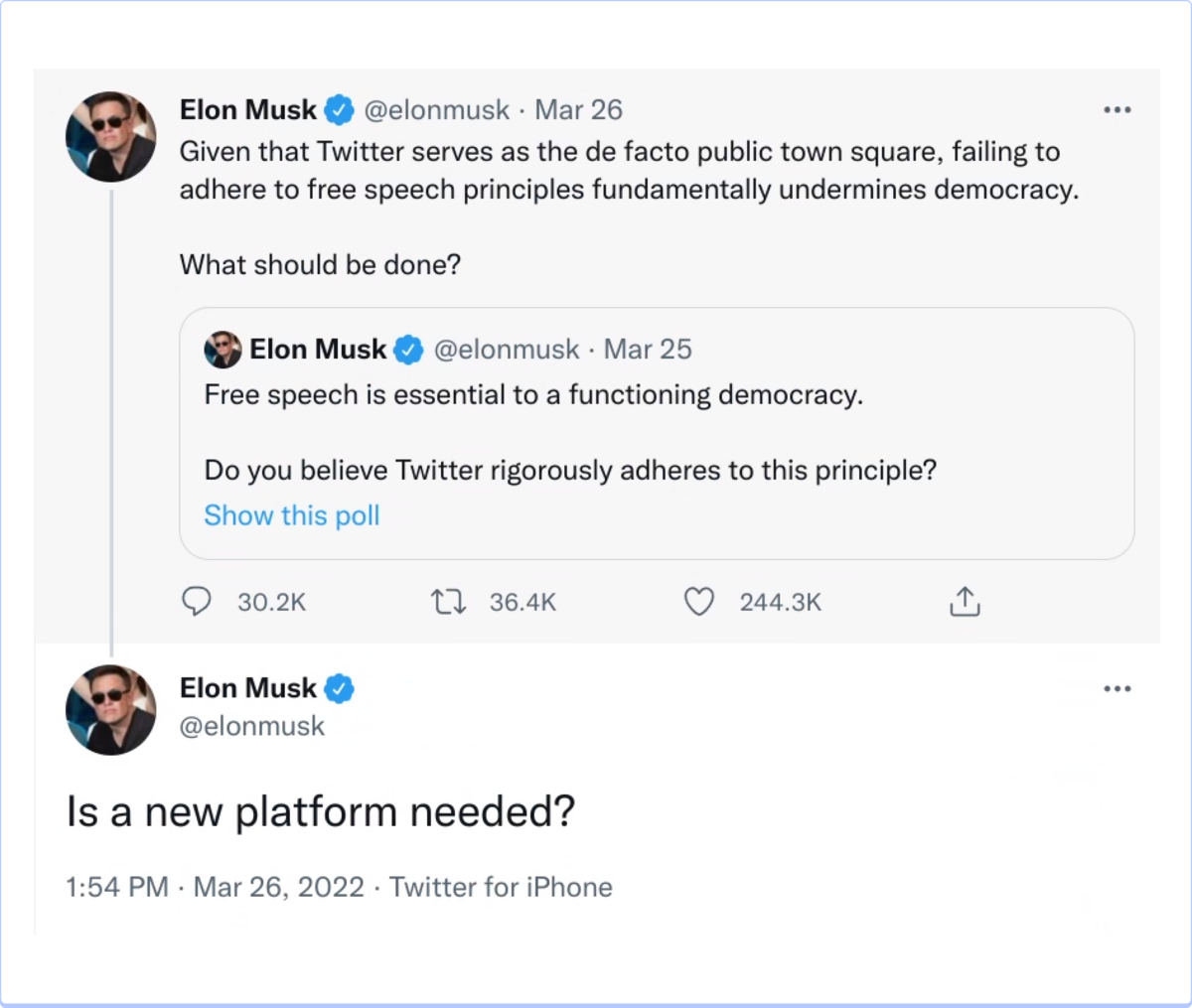 Elon is saying Twitter has too much power to control speech, and we need a new platform.

Why it matters? There have been several attempts to create a “decentralized” twitter.

They all have failed (so far) because decentralized isn’t a good sales pitch.

They care about who else is there, and if the party is any fun.

But at some point, it will happen.

And I don’t know if Elon is going to start it, or at least inspire some kid in his bedroom to make it.

Hopefully Elon will use his fame (he’s the 9th most followed person on Twitter), to help promote it when it’s here.

A new social protocol will happen eventually. When it does, it will be glorious. And I will be investing in it big time. Just a matter of waiting for the right project to appear. 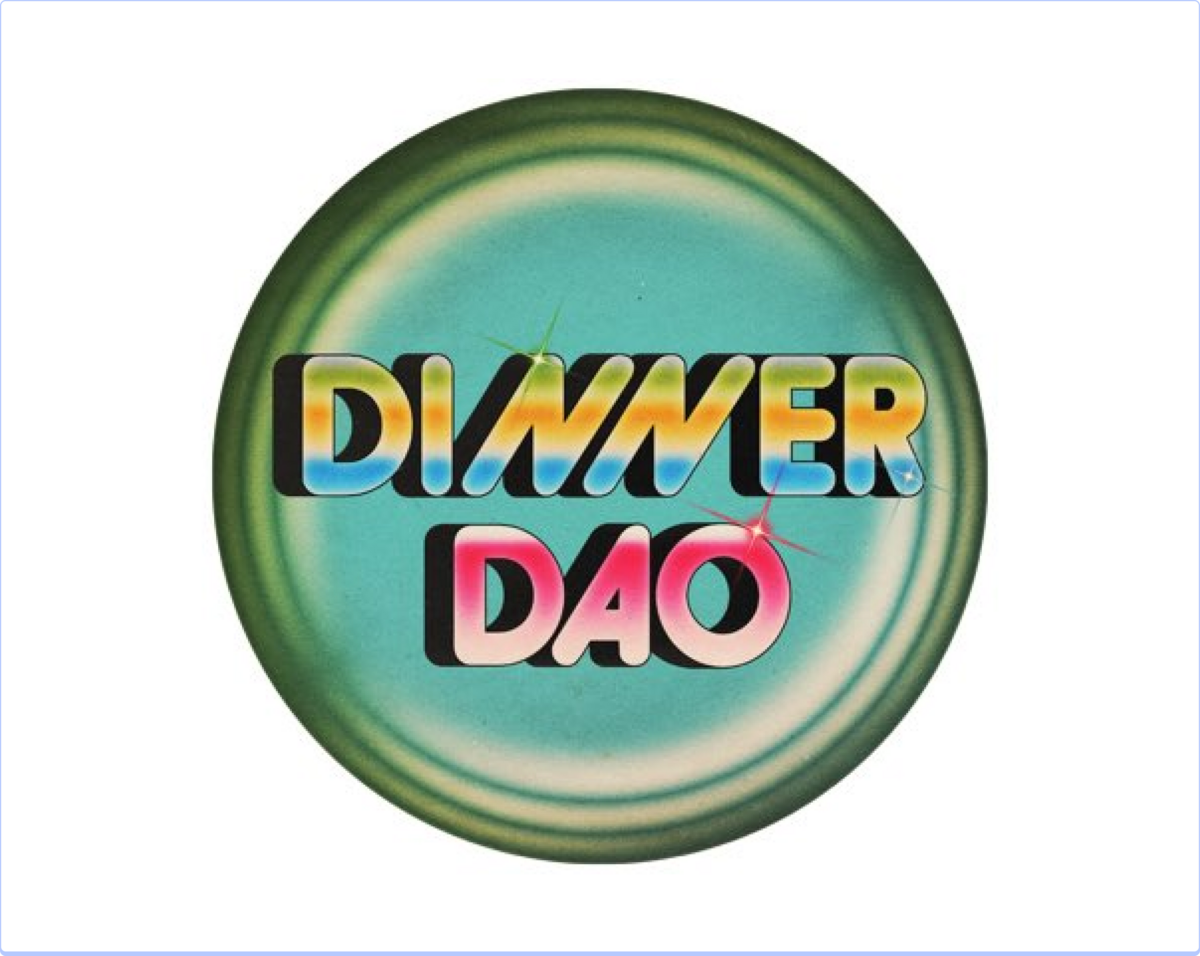 I just bought an NFT for $1,000 that gets me access to DinnerDAO.  A once-a-month dinner club for web3 nerds like me.

Here’s how it works:

At first glance, this is just another club with a membership fee - does an NFT make it better?

Well - there’s one big difference. You can’t sell your gym membership, but you can sell your NFT. So let’s say I go to dinners for awhile, this concept gets more popular, and more people want in - I might be able to flip my NFT for a profit when I’m ready to exit.

I'm in the Austin chapter, but they have chapters in New York, LA, SF, and Portland too.

Oh, and if you see my wife, don’t tell her that I spent $1,000 pre-paying for dinners with randos from the internet. She’s still a little salty about the whole “forgot about Valentines” thing.

Coinbase eyes Latin America’s largest crypto brokerage and its $2.2B parent company as its next major acquisition.  Read more here.

Google trademarks “Non Fungible Planet.” But unlike other filings, this one doesn’t have any implications of collectibles or tokens - instead the focus is on education about climate change.

Web3 came up on the Joe Rogan pod and Antonio Garcia-Martinez talked about how web3 could make sure nobody gets kicked off social networks.  One of these days, a guest is gonna push him over the edge. Check out the full episode here (web3 is featured at 2 hours, 41 minutes).

GUY TRIES TO FLEX HIS NFTS ON LINKEDIN

LinkedIn is already half cringe. If you start adding your NFTs as work experience, you’ve gone full cringe. 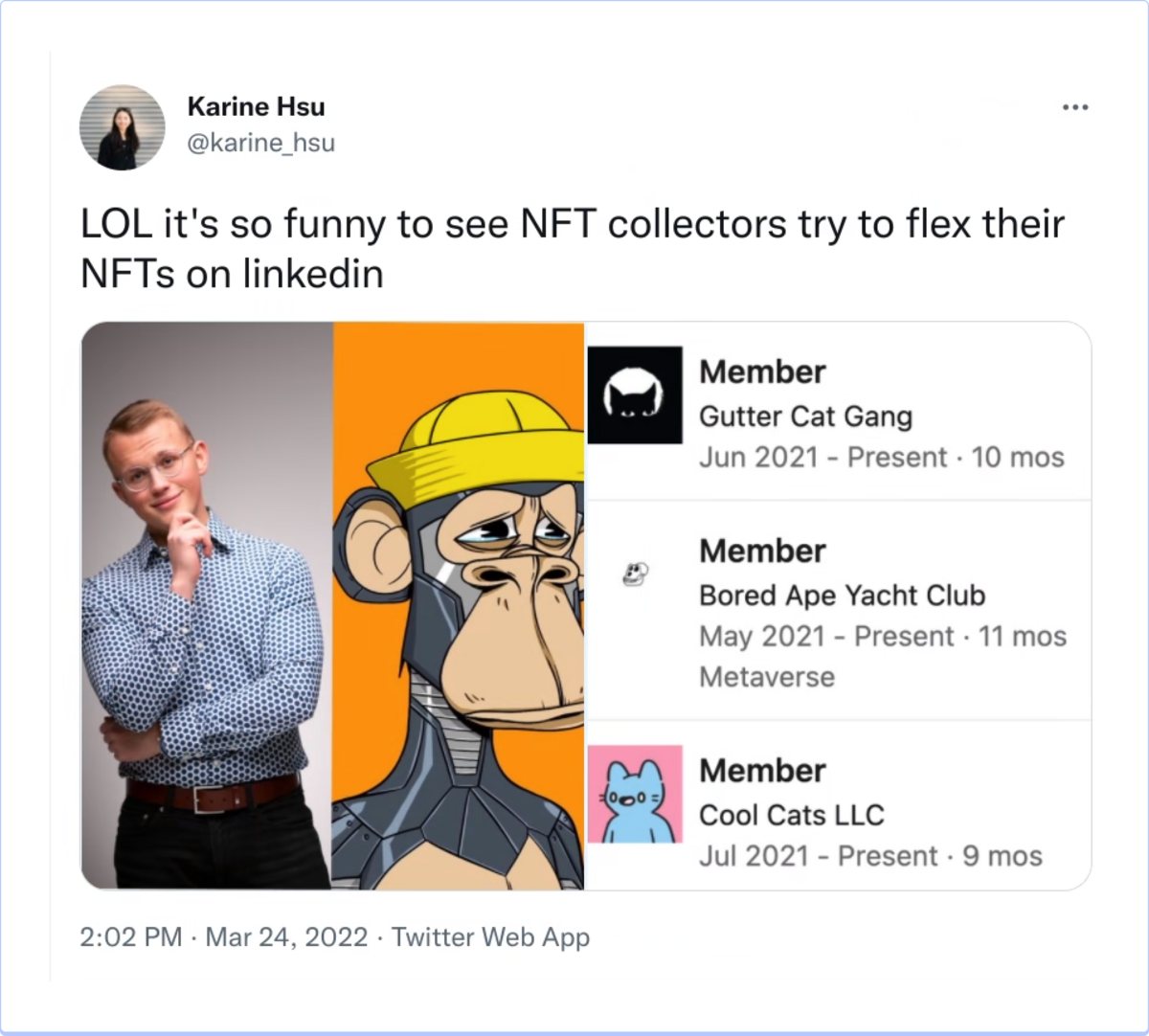 Last week, we told you that we're launching our TikTok account.

You've got one more day to get your submissions in.

How? Record a TikTok based on today’s edition of the Milk Road. You can take 1 story, or multiple stories, and just make it fun/entertaining to watch.

After you record, send us the link on Twitter

The top 3 get $50 (paid via crypto, ofc) and get the opportunity to turn this into an ongoing side hustle!

Reviews from The Road

Getting warmer...Arf arf back at ya!

Aaaand there it is.

Soooo don't just leave us on read, tell us, what'd you think of today's email? 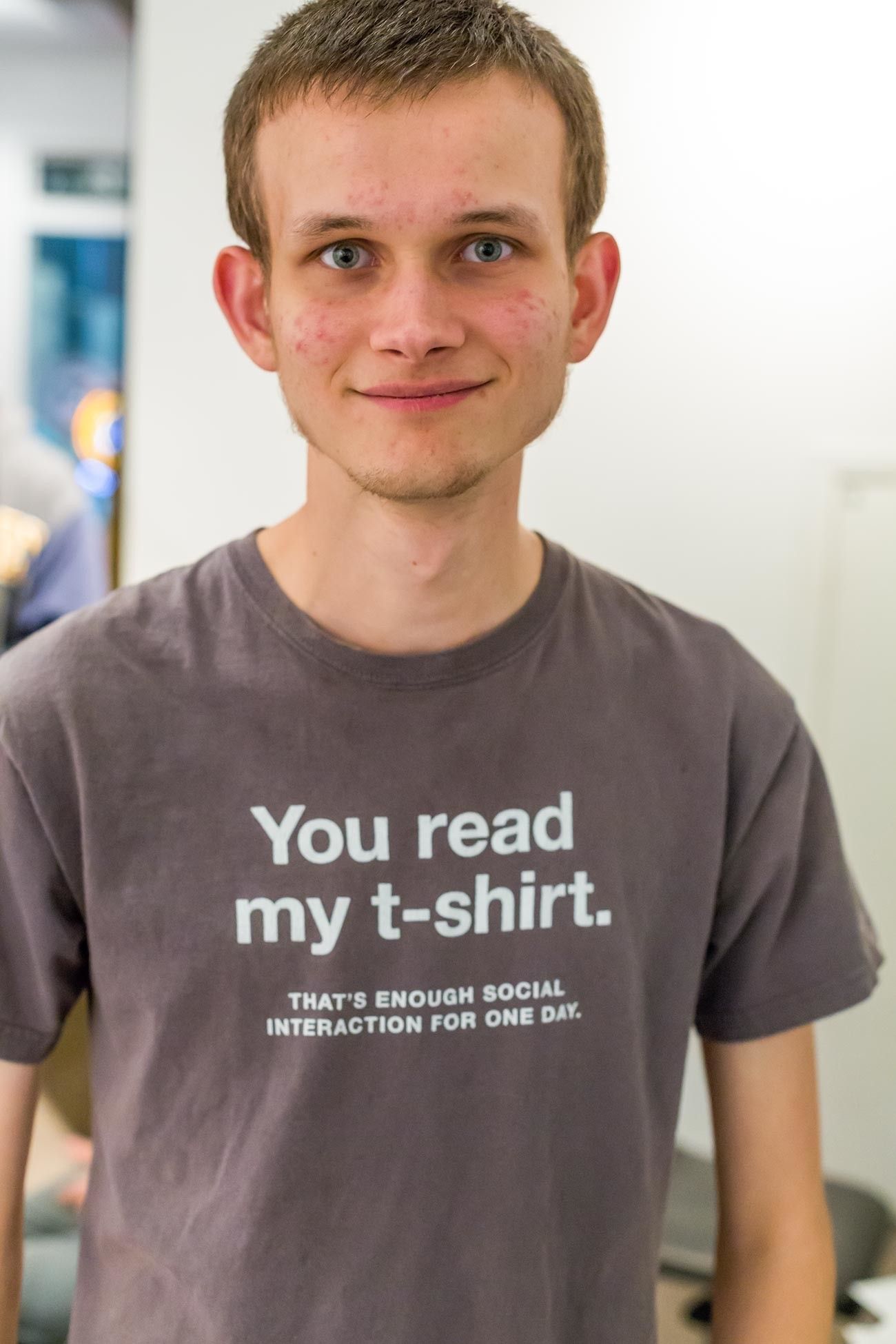