GM. This is the Milk Road, where we tell you what’s going on in crypto faster than a nun on rollerblades.

OK let’s dive into the drama 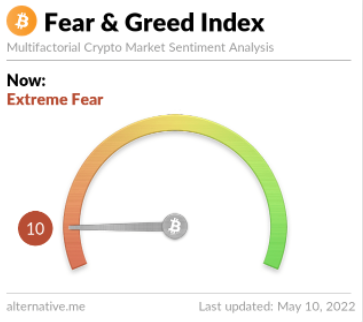 CHAOS FOR UST AND LUNA

I’ve been investing in crypto for ~8 years now, and yesterday was one of the craziest days in a long time.

$UST - one of the largest stablecoins in the world (worth ~$18B at its peak) got hit with a major attack to try and “break the peg”.

Luna/UST has been a star performer over the past year in crypto. Luna was up as much as ~25X in the past year, and UST became one of the top 5 largest stablecoins in the world.

But all along, we all wondered…

What happens if there is a bank run? Will it go into a “death spiral”? Critics believed it was inevitable.

Believers knew it was possible, but the risk reward ratio was still in their favor.  Now - we find out who is right.

Why This Story Matters:

Why Did It Happen?

Was this random chance? Or a coordinated attack? Like when George Soros bet against the pound to “break the Bank of England” (and profited $1B doing it)

What triggered the bank run?

We asked some friends who uh..know things and they believe two things:

Citadel is one of the world’s biggest market makers. In 2020, they made $6.7B and $4.1B in EBITDA and hadn’t raised any outside capital previously.

They make about as much money as Nike, Starbucks, and Paypal. Yeeeeesh. This is a dramatic entrance to the crypto game.

Here’s the Play-By-Play of what went down:

Here’s where we’re at now:

1/ They announced a $1.5B loan from their reserve -  $750M of BTC to over-the-counter trading firms to help protect the peg of UST and $750M worth of UST to accumulate more Bitcoin

2/ They moved another ~$1.4B from their reserve wallet to protect and bring the peg back.

A week ago, this wallet had ~$4B in all crypto reserve assets. Now, the reserve wallet has NO bitcoin left (it’s all been moved to a Binance wallet to be sold) and only has ~$195M in other crypto left.

Sounds scary, but at the same time - this is the point of the reserve. To protect the health of the project in case of a death spiral. If UST depegs, they can sell these assets to buy more UST and save the day.

Here’s what smart people are saying about the whole episode:

The absolute best summary of the situation comes from Jon Wu. The thread has nearly 20,000 likes because it is such a good breakdown of the whole situation.  You can read it here.

Sam Bankman Fried, the founder of FTX: Just as the outside view skeptics predicted, during a large market move a stablecoin blew out.

“Stablecoins can serve some useful purposes, but if you zoom out, right, and you say this is a stablecoin, backed by volatile assets, what’s gonna happen in a big move. Right? Like you know how this is gonna play out.”

Raoul Pal, macro investor & friend of the Milk Road: “UST looks like they stepped away from support. That gets the shorts hot to trot! But when everyone is all in on the short side, they are the vulnerable ones, not the peg. I have no idea how it plays out and have no skin in the game but I see that the LFG held off from using reserves and that is smart. The drama is probably not over. It's a hunch…

My thoughts and takeaways today:

2. If there'll be a decentralized stablecoin that succeeds, it'll be the one with the biggest value and the most battle-tested team.

Let that sink in. It's not a game where johnny-come-lately has a chance.

3. Overall, the UST depegging played out exactly as we saw in past historical cases. I'm even more bearish on all copycats, and bullish on UST once the dust settles down.”

4. The bounce back is a great arbitrage opportunity. The dynamic that gives rise to a bank run executes in reverse on the way back.

Disclosure, we invested about ~$200k into Luna at a ~$40 price point last year. And hold some small amount on anchor earning yield.

This has always been a big risk. What happens in a bank run?

Can it survive a death spiral? Our take was never “will it happen” but “what will happen…when it happens?”

How resilient would it be? Would the $4B worth of crypto in the reserve be enough to defend? Will public trust be shaken or gone forever?

My prediction (not financial advice, just a personal prediction):

We are going to be watching closely to see what Do Kwon and the Luna Foundation Guard say when they tweet out their update later today.

A LAUGH TO MAKE IT ALL BETTER

You know what they say in PR 101.  Drop bad news behind bigger and badder news.

While UST was in a downward spiral, Azuki (a top 5 NFT project) opened up the kimono to share who was behind the project.

What happened? Their founder, Zagabond, tweeted about his newest project in a blog post called “A Builder’s Journey.”

The issue was Zagabond basically admitted that he was the founder of 3 projects before this that have:

Just another day in crypto, a dude acting like a girl to sell an NFT.

The market responded by dropping the floor price from 20E --> 12E on Azukis.

TODAY'S MILK ROAD IS BROUGHT TO YOU BY MISO ROBOTICS

Now, you can invest in Miso’s expansion.

Restaurants are already benefiting from Miso’s tech. White Castle recently announced the rollout of Flippy 2 at 100 of their locations and Buffalo Wild Wings is piloting Flippy Wings which is forecasted to increase food production speeds by 10-20%.

Most recently, Jack in the Box has joined the fleet of Miso’s partners, bringing Flippy and Sippy products to a pilot location to maximize kitchen efficiency and customer service.

Now, you can invest in Miso before Flippy goes nationwide. Learn more.