Binance’s move to remove support for USD Coin (USDC) may have ruffled the feathers of investors but Circle’s CEO believes USDC could end up a winner.

Binance's move to halt support for USDC and other stablecoins drew the ire of some investors, with some industry experts arguing that it could negatively impact the USDC ecosystem. However, the Circle CEO seems to think otherwise.

Jeremy Allaire, CEO of Circle, the company behind USDC, has claimed that Binance made the right decision by limiting the number of supported stablecoins on its platform, saying that this will increase the utility for USDC.

“Converged dollar books on Binance - now same as on FTX and Coinbase - is a good thing. USDC utility just increased,” tweeted Allaire, predicting that this move will lead to "a gradual net share shift from USDT to BUSD and USDC." 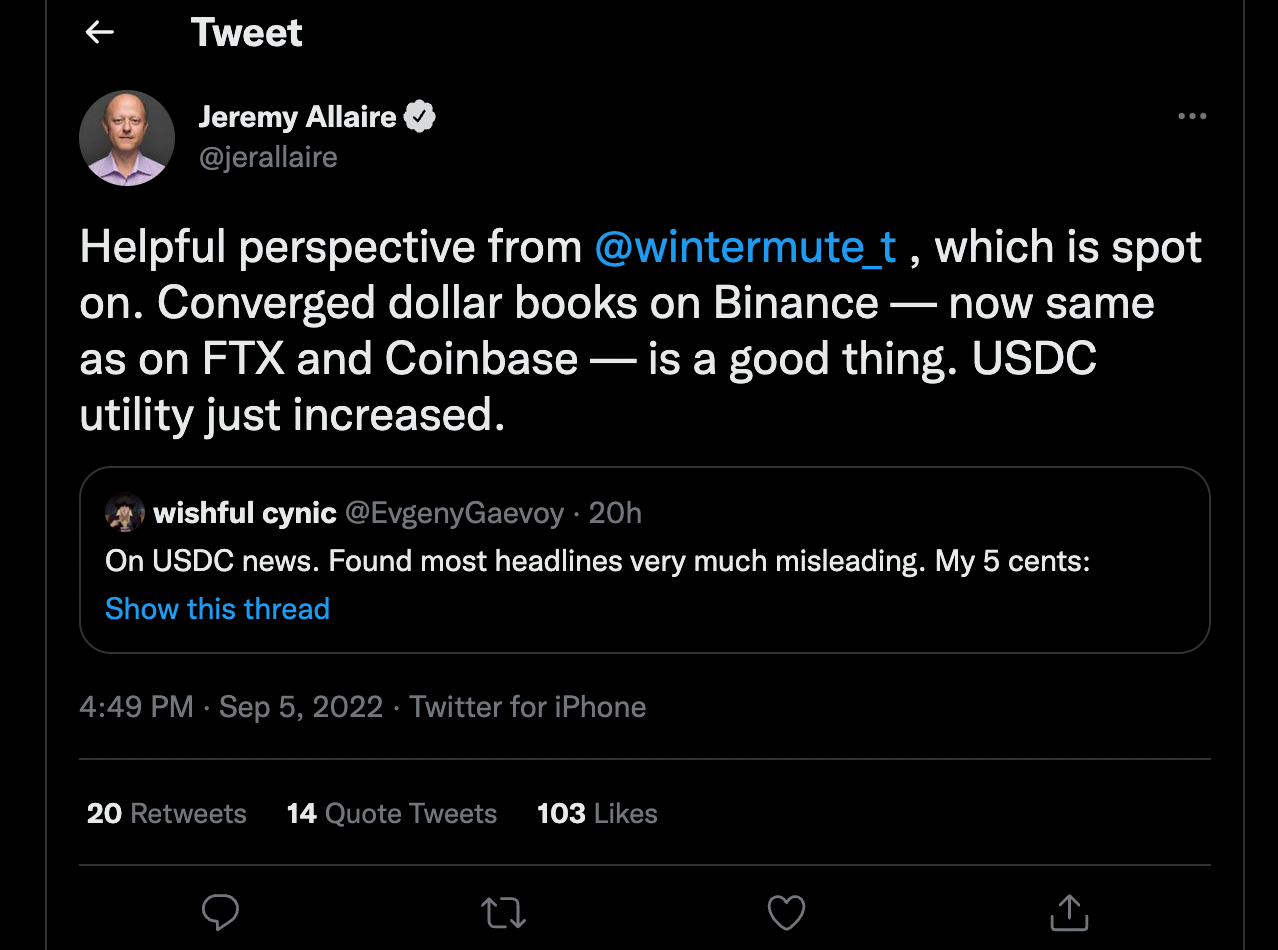 Evgeny Gaevoy, Wintermute’s CEO, also supported the decision, noting that liquidity will no longer be split between different stablecoins which will ease the pressure on market makers. 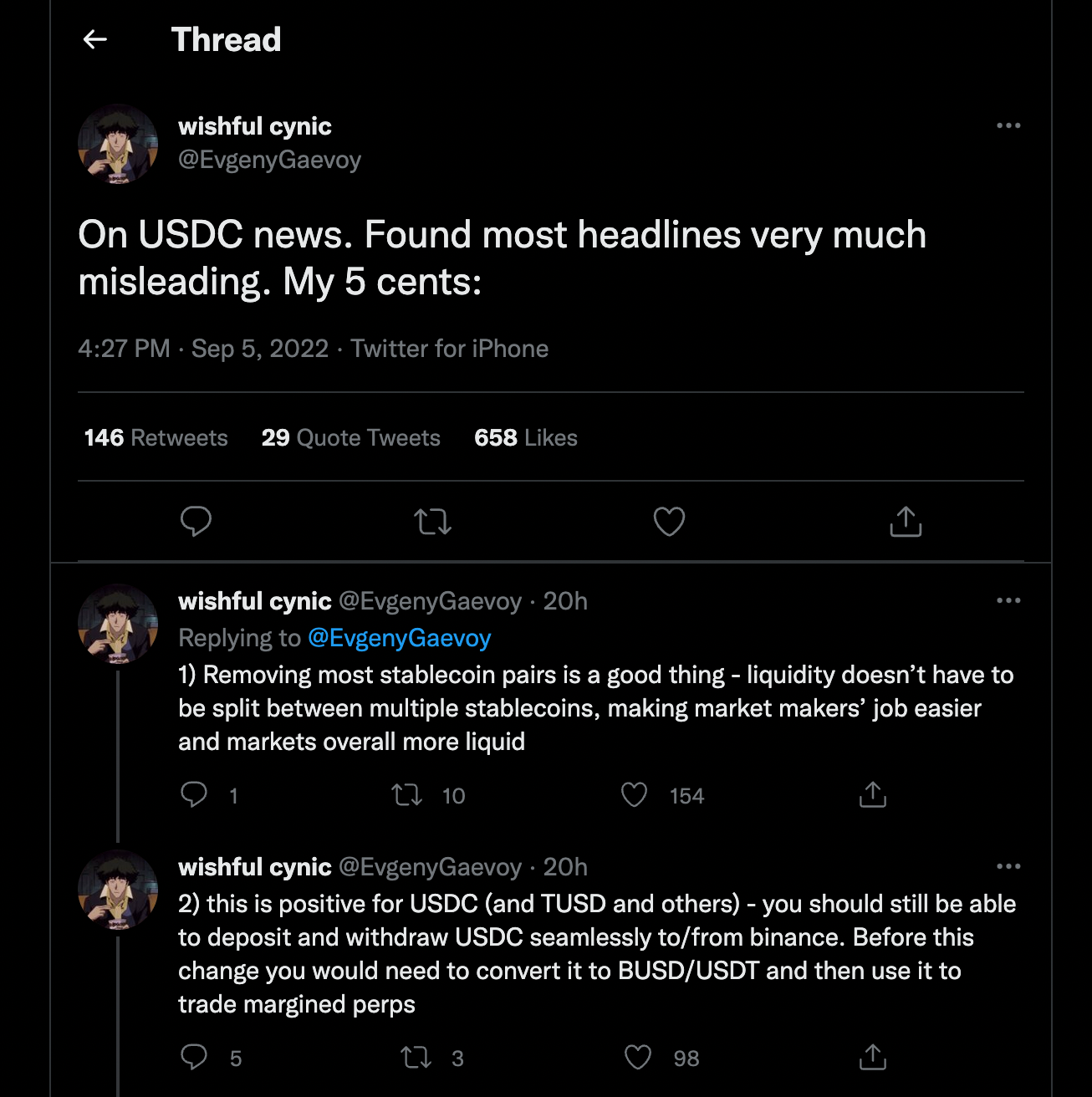 Gaevoy argued that the move also makes for a better customer journey. That is because users previously had to manually convert their stablecoins to BUSD or USDT in order to trade margined perps. However, now these stablecoins are automatically converted to BUSD while users still have the option to seamlessly deposit and withdraw USDC and other stablecoins. 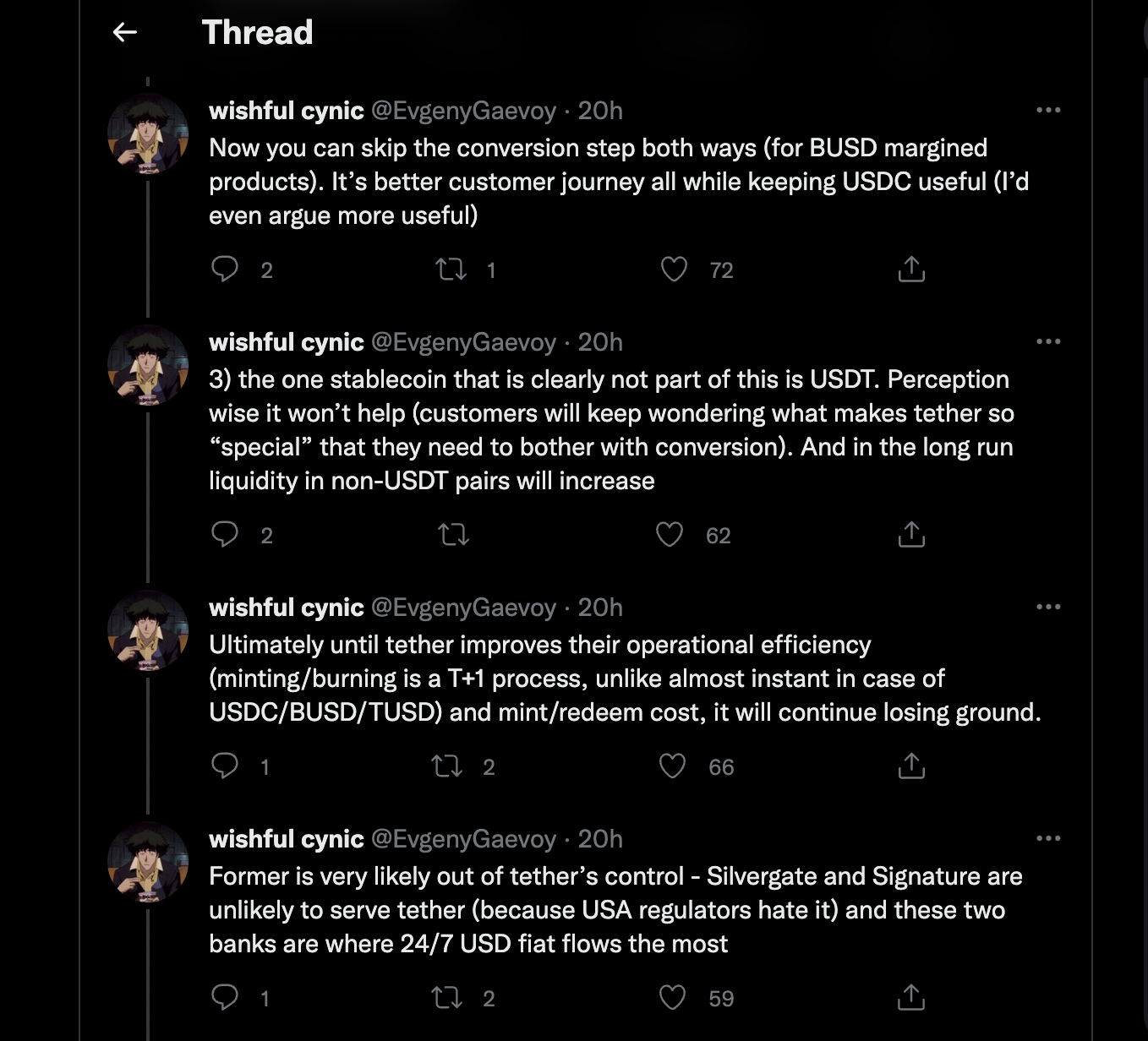 Another upside to the decision is that it forces Tether to improve operational efficiency or lose its market share to rival stablecoins. Gaevoy wrote on Twitter that USDT minting or burning is a T+1 process, meaning settlement occurs in around 24 hours, unlike the almost instant settlement models employed by USDC and BUSD.

With effect from September 29, the auto conversion mechanism will convert USDC, USDP, and TUSD stablecoins in a 1:1 ratio to BUSD. Binance said the move will help “enhance liquidity and capital-efficiency” on the platform.

No plans for USDT

Binance has revealed that the exchange does not plan to automatically convert USDT to BUSD, at least for now. No clear reason for USDT’s exclusion was given but pundits believe the largest cryptocurrency exchange is only testing the waters with the listed stablecoins.

Binance CEO Changpeng Zhao has clarified that the move to auto-convert to BUSD is “permanent” and will offer the best price and “lowest slippage for users.” Nansen’s data indicates that Binance has been reducing its USDC balance by converting them to BUSD since August.