GM. This is the Milk Road where we consolidate all the tabs in your browser into 1 clean, readable email.

Today’s estimated read time: 2 minutes and 25 seconds (basically the same as one full brushing session as recommended by the American Dental Association)

The last 24 hours were rough across the board and it looks like fear is starting to set in. 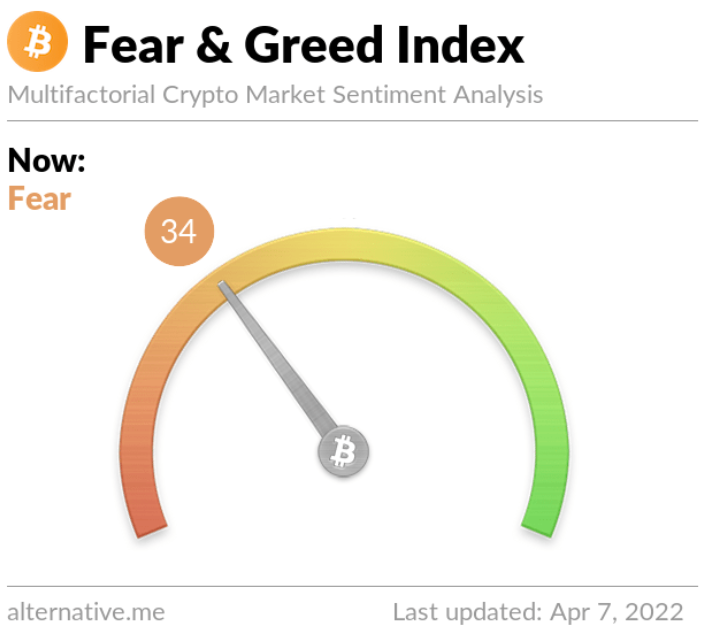 But even when the Market has fear. You KNOW the Milk Road has… 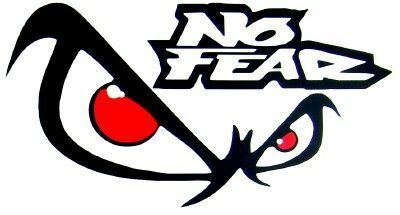 Some say this was just a t-shirt brand. But I say it’s a life motto.

OK - Let’s get into the good stuff:

DAY 1 OF BITCOIN MIAMI IS IN THE BOOKS 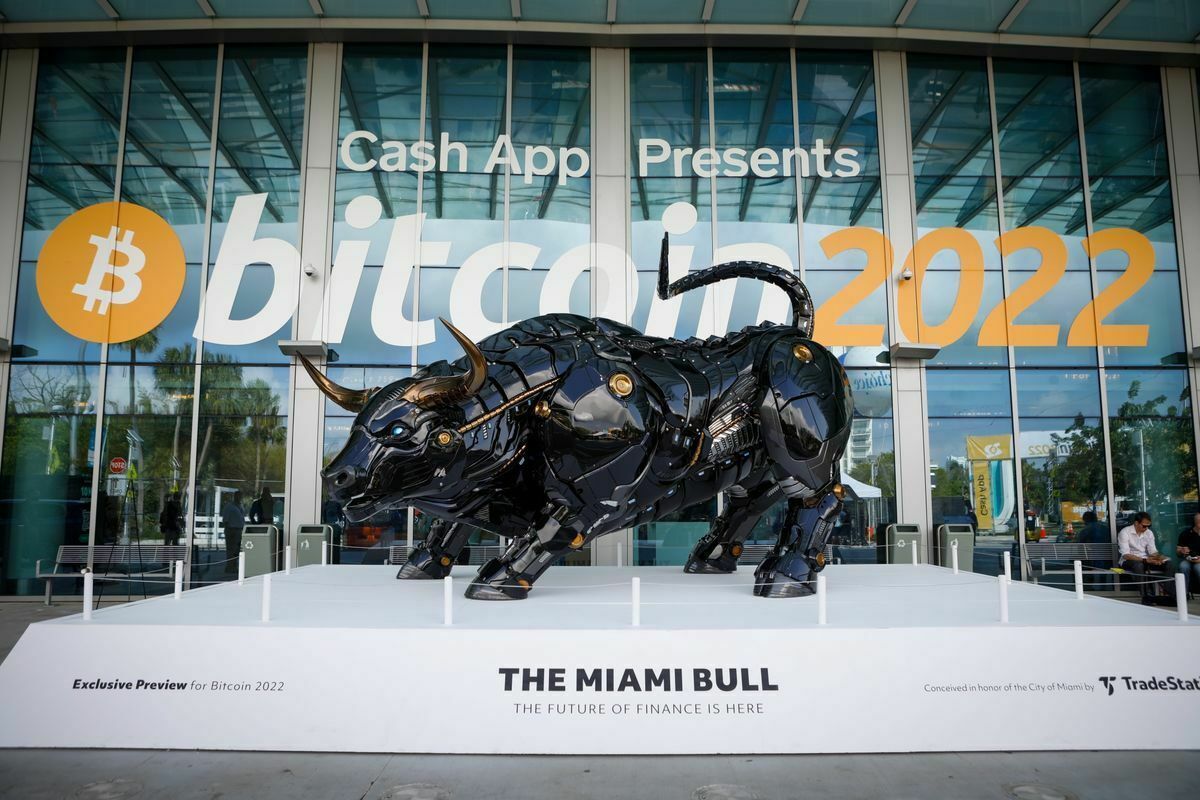 The largest bitcoin conference in the world kicked off yesterday in Miami.

We didn’t go to the conference, because I don’t like shaking hands with people.

Here’s what we missed.

There’s a giant bitcoin bull statue in Miami now. It weighs 3,000 pounds and has laser eyes. You can’t make this shit up.

It took 30 people half a year to build this, and it was designed by the guy who did movie art for Transformers.

What else happened at the start of the conference?

1) Mike Novogratz, the Founder of Digital Galaxy, had a fireside chat with Pomp where he predicted that Bitcoin will eventually get to $1M.

2) The mayor of Miami (rumor has it he reads the Milk Road) announced his “Vision for Bitcoin America 2024” which basically says:

b) We need to integrate Bitcoin into society as soon as possible. You should be able to buy a snickers bar at the corner store with Bitcoin.

DO KWON AT IT AGAIN WITH ANOTHER $230M BITCOIN BUY

Before the Bitcoin conference kicked off, Do Kwon bought another 5,040 bitcoin (~$230M).

But this time he gave us a little insight into what a day in the life of a crypto whale looks like. 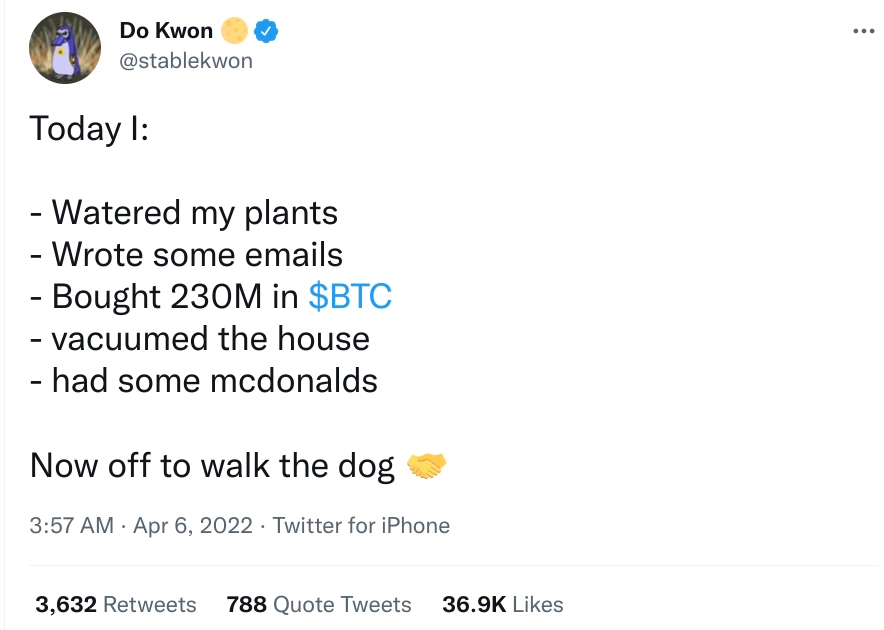 He also received some friendly advice from another fellow bitcoin whale.

BTW, at the Milk Road we use a Roomba for that.

Combined, these two CEOs have bought $420M Bitcoin this week alone. In total they hold ~$7B worth of Bitcoin.

TODAY'S MILK ROAD IS BROUGHT TO YOU BY FRANSHARES

Why Do Millionaires Love McDonald's?

It’s not the Quarter Pounder or the 20-piece McNuggets, and it’s definitely not the Filet-o-Fish. Millionaires love Mickey D’s because franchises are one of the great underrated investment opportunities.

Think about it – they’ve got massive cash flow potential, reliably generate passive income (with average returns anywhere from 16-21% and higher), and are a great hedge against inflation.

Unfortunately, we don’t all have 7-figure incomes to start our own franchise…

But that’s exactly where Franshares comes in.

Anyone can invest in Franshares’ franchise portfolios and instantly tap into the magic of gym chains, restaurants, haircare, and more.

As the value of each location increases, so does your investment. And you'll be getting profit distributions after the initial ramp-up period.  Passive investing has never been more accessible.

Want to dip your toes in the franchise waters? Get started with Franshares right here.

iHeartMedia is about to buy a bunch of NFTs from top collections including CryptoPunks, Mutant Ape Yacht Club, and World of Women to build a new podcast network around the IP that they’re calling the “Non-Fun Squad.”

If you haven’t heard of iHeartMedia, I don’t blame you.  They quietly have the largest reach of any radio or tv outlet in the U.S. They own ~860 radio stations and get about 245M monthly listeners just from their Total Traffic and Weather Network stations alone.

Our eyes are peeled to see how this IP translates to everything, but especially podcasts, where you can’t even see the NFT.

GET YOUR 8 PIECE NUGGETS

Solana NFTs are finally live to trade on the Opensea marketplace. The wait is finally over.

Facebook hinted that they’re building a new currency for their Metaverse…and it’s currently being called Zuck Bucks.  Zuck Bucks, brought to you by Meta. If I worked at Facebook, I’d be turning in my badge and laptop tomorrow.

Axie Infinity’s parent company, Sky Mavis, raised an emergency $150M to improve its security + return money to some of the users who lost money in last week’s hack.

ESPN inks a new 3-year deal with Autograph to release NFTs.  They dropped the first collection based on Tom Brady's documentary “Man In The Arena”.

Lamborghini is auctioning off the last Aventador made as an NFT. It’s a 1/1 and the auctioning starts on April 19.

You can now use Apple Pay on MetaMask to buy cryptocurrencies. There’s a $400 daily limit, but it’s one step closer to normal humans being able to use crypto.

The Tennessee Titans become the first NFL team to announce they will be accepting Bitcoin for payment. The option is only available for larger purchases (season tickets, box seats, etc), so you can’t buy beer & popcorn with BTC just yet. BTW - these types of announcements are usually a “look at me!” PR stunt that the company does to appear “cutting edge”.

NEAR raises another $350M. That brings the total up to $500M raised this year alone.