GM, this is the Milk Road. We're your tour guide to the wild, wild world of crypto.

Smart people think it’s because an executive order from President Biden showed that they were kicking the can down the road on regulation.

They said they are looking into it, and will take a measured approach. This is a positive signal. Basically, “slow moves are good news” when it comes to regulation.

The funny thing is - this wasn’t the official order. The memo was ‘accidentally’ leaked, then pulled down right away - but the internet doesn’t sleep.

This was like a governmental nip slip, and people immediately screenshotted & shared it everywhere.

By the way. This is my first time reading an “executive order” and I’m having corporate America flashbacks.

Here are my top 3 “corporate buzzwords” from the memo:

3rd place: “interagency colleagues” (“nobody in my office understands this shit”)

A word from the Editors 🎙️

This email list is getting pretty big, pretty fast.

The bigger it gets, the more tempting it gets to try to make everyone happy.

But like my uncle Rick once told me: “Try to make everyone happy, and you end up sad.”

He’s right. The bigger this email list gets, the more feedback we get.

Some people want the news. Others want investment advice. Or deep dive analysis. Or long think pieces. And some people just like hearing about new stuff with some light commentary from us on top.

So what do we do? I can’t make you happy, so I’m going to make me happy.

That means I’m going to “write the email that I want to read.”

For me that means:

So that’s the game plan.

We’re going to just give you quick hits of what’s interesting today. It’ll be light and simple. And if we find cool stuff that we are investing in or we talk to interesting people, we’ll tell you all about it (like the Luna Bull case a few weeks ago. If you followed us into that…you’re up 82%. You’re welcome :)

If that is what you want, then slide this baby over to your primary inbox.

And if that isn’t what you want. No hard feelings. Let’s break up like a couple from Love is Blind when they see each other for the first time.

What are smart people talking about today? 🌊

We’re clearly seeing a crisis unfold and it’s safe to say money will never be the same.

Check out this crazy prediction on the start of Bretton Woods III.

Basically, what we're seeing right now is unlike anything since 1971, when President Nixon took the U.S. dollar off gold in 1971 and that we're headed towards a system backed by "outside money."

If you wanna dive in, here's the full report and the tweet. 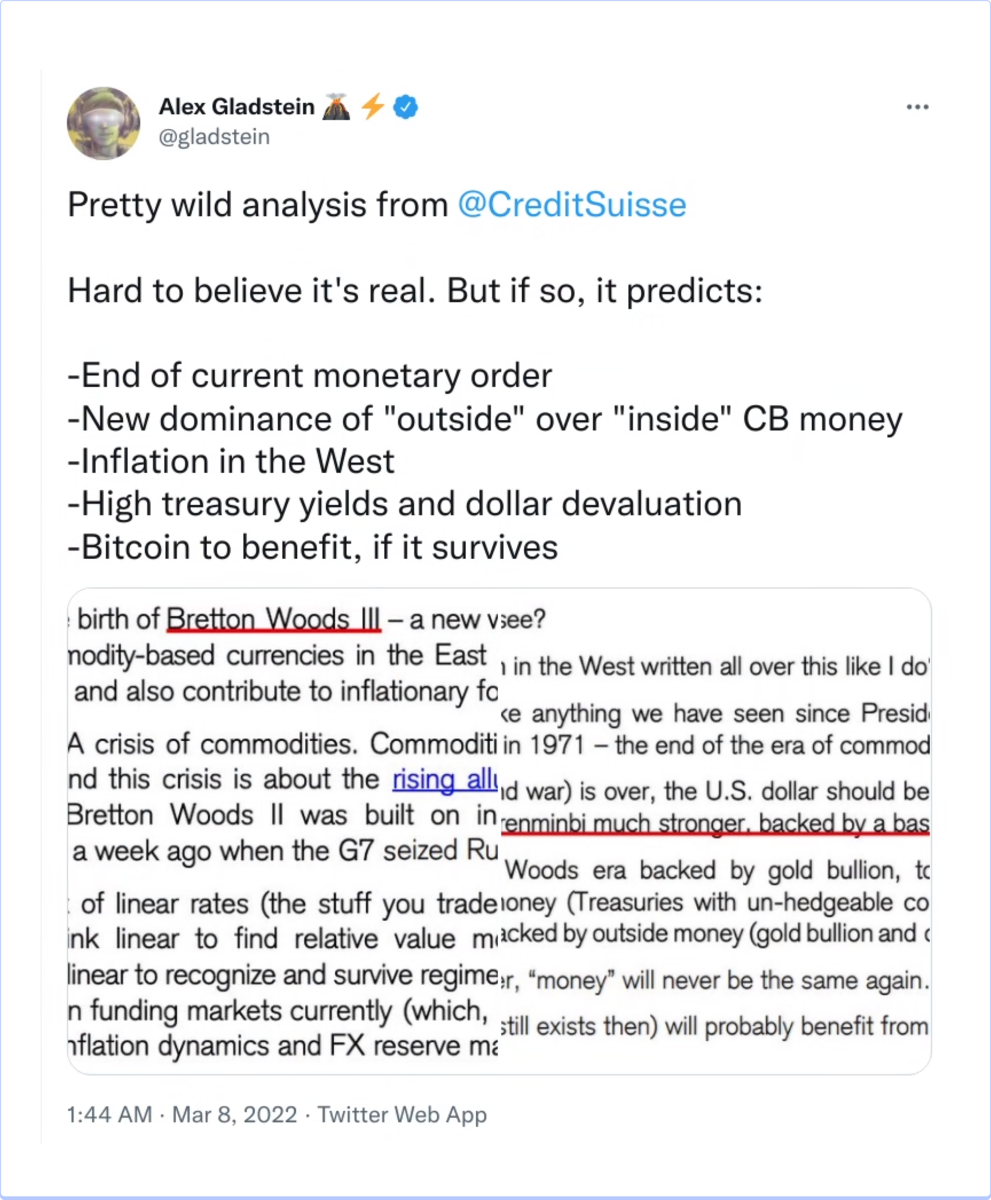 #2 - In that Credit Suisse analysis, he says “if Bitcoin still exists, it’s going to be six figures”

Bitcoin has survived 10+ years, and multiple attempts to kill it by governments, media, competitors etc… There’s a very good chance it’s around for another 10+ years.

This is the VCs subsidizing growth in crypto. Basically, users and developers get paid to use the protocol. 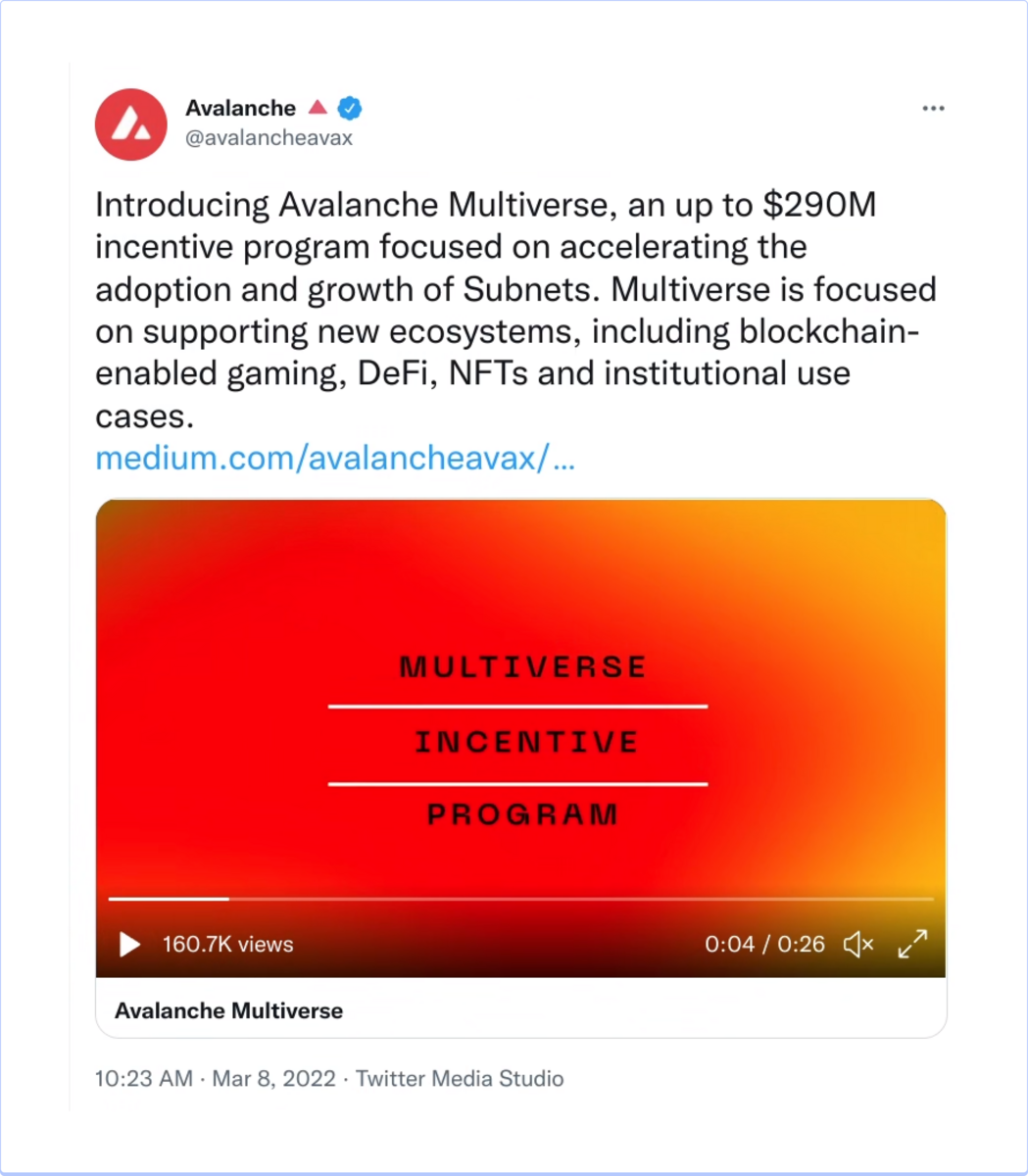 #4 - My friend invested in Coinbase's seed round

When they IPO’d, I asked him what was a better investment:

He said Bitcoin would have performed better… but almost nobody who bought Bitcoin back then would hold their whole position for 10 years the way he had to with Coinbase.

Being “illiquid” is a feature, not a bug (sometimes).

Check this out. A Stanford final exam question was about “impermanent loss” in a DeFi liquidity pool 🤣

Back in my day, we were figuring out if Train A was going at 60 miles and hour..and train B was going 30 miles an hour.... 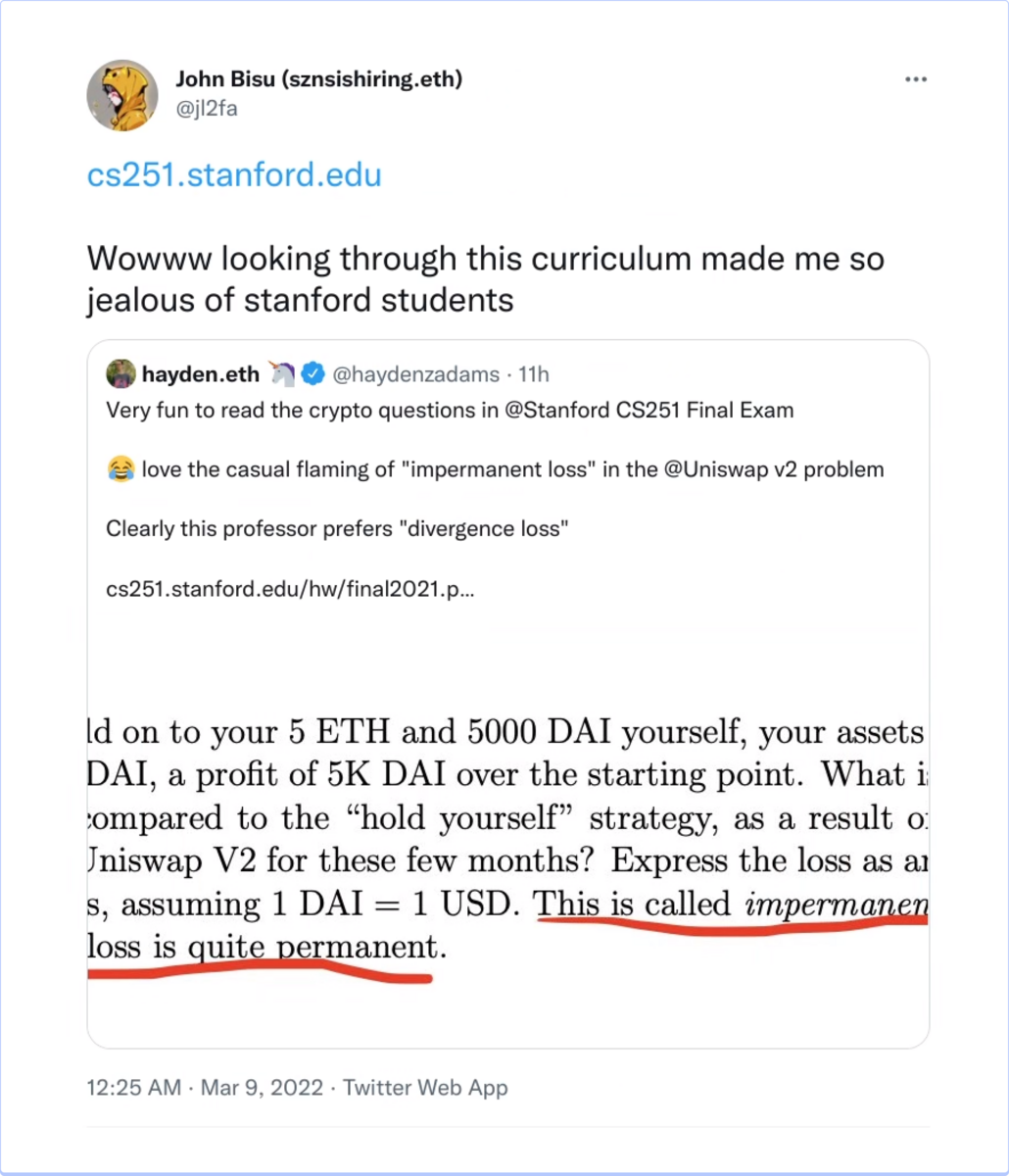 Gary Vee’s NFT project (VeeFriends) has had over $100M+ of trading volume since he launched it.

Why do people want to own it? Well, Gary has a cult following, and the NFT gets you access to his conference for 3 years.

Where else can you get a guided hike followed by a rave?

Pretty interesting to see how these NFT communities try to build “offline value” for their holders (same as what Gary Vee  has done). 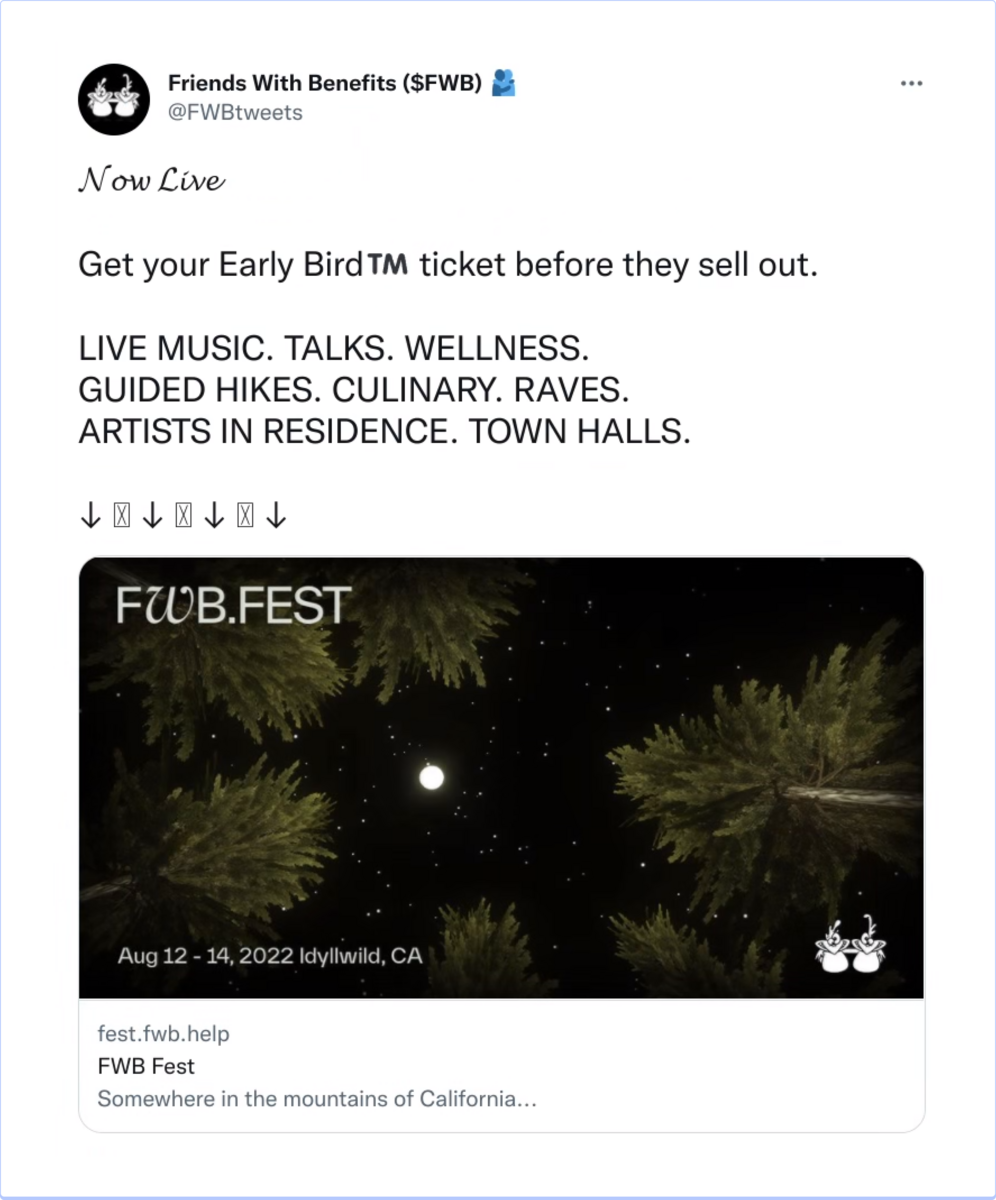 We found this great thread by Miles Jennings (Crypto General Counsel at a16z) explaining what people miss about DAOs:

As more and more people get interested and want to protect privacy, naturally privacy coins are being bought and prices are going up, up, and up.

Jon Wu takes a closer look at how privacy coins and privacy networks can play a big role in the future of crypto payments and why he made a big bet on Aztec to be the big winner (by joining the team): go deep here. 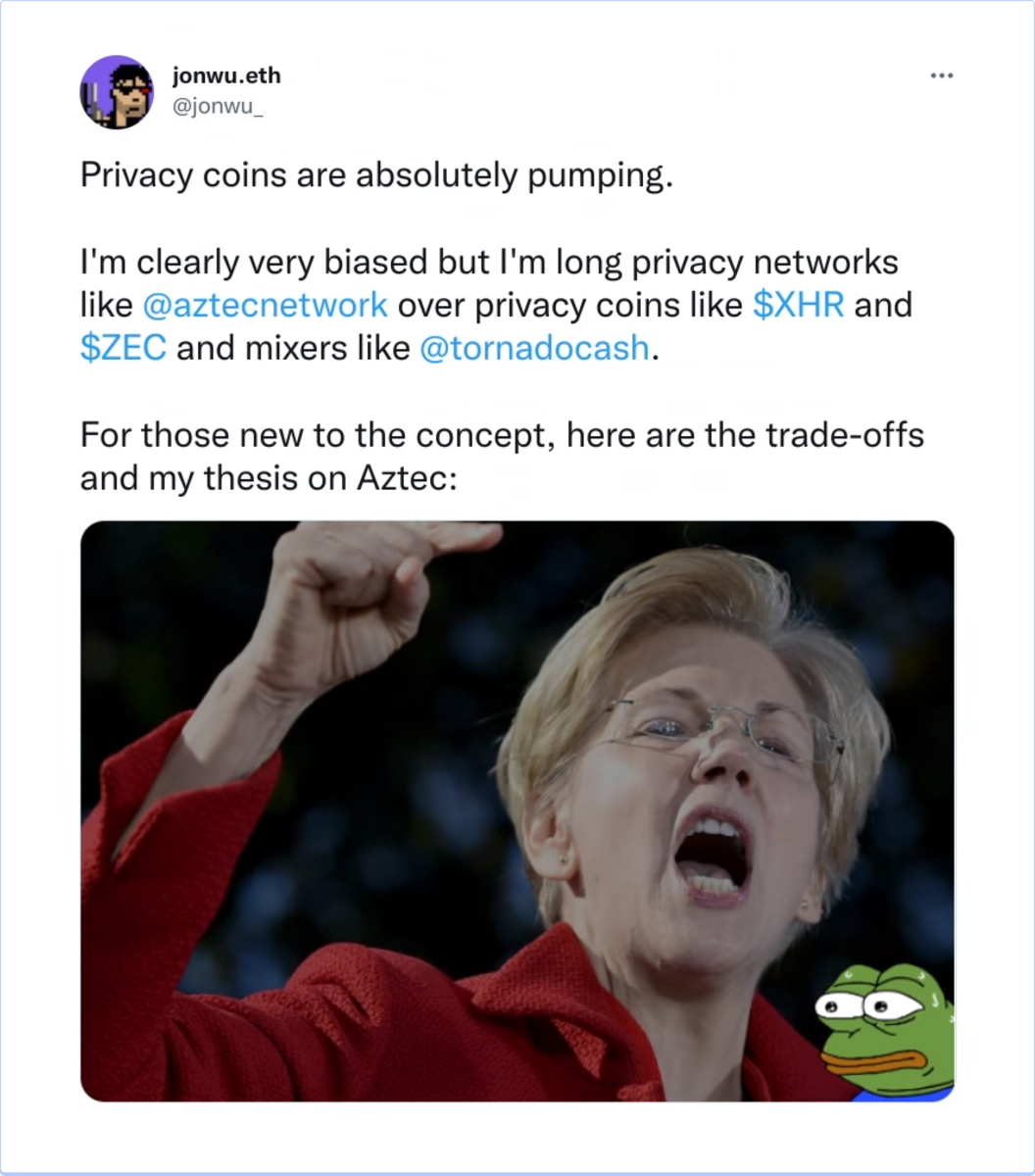 No, but seriously, these gas prices need to go down. 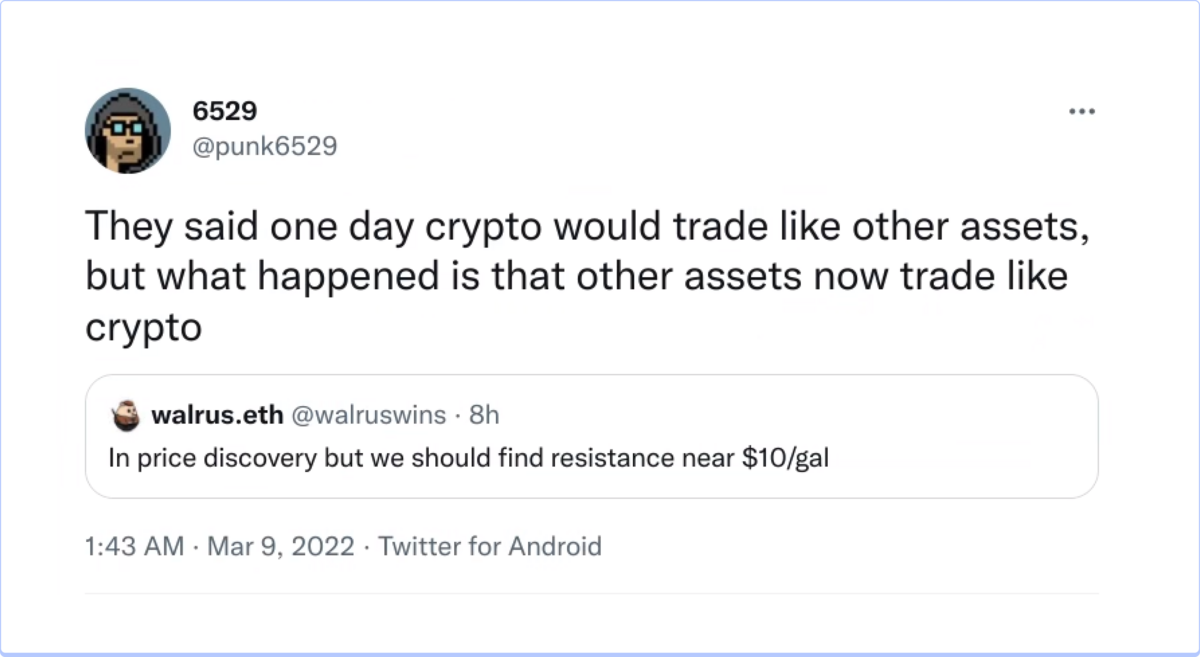 Layer 1’s are the creme de la creme when it comes to investments in crypto. If you predict who will win right, you'll be eating only the finest desserts for the rest of your life.

Why? Because they’re basically the underlying “platform” that all apps run on.

In terms we all know, an iOS is like a layer 1, because it’s the underlying level that all of the apps are built on.

That’s why everyone wants to find the next big one. If you do, it’s gonna be a massive win.

So when Naval recently said that “NEAR seems like the ETH2 roadmap actually implemented,” our eyes perked up and we dove in.

He dropped that nugget in a Twitter spaces event with the founders of Solana, NEAR, and Avalanche.

Here’s the argument Naval made for each

Solana is almost like the big block approach brought to smart contracts.

Solana optimized for one thing and one thing only, speed.  It was designed to be a Nascar race car vs. all of the other L1s.

As Naval put it, Solana is the best processing hardware possible.

Avalanche is creating the Internet of Finance. It makes for a great payments platform and can bring in a lot of institutional adoption.

It offers a highly customizable platform enabling other projects to build on top of it resulting in strong demand for the token.  Basically, they got the incentives for builders right.

Why? Because they have a fixed, capped supply, a burning mechanism and staking.

As Naval puts it, they have the best science possible.  Which to me, means they figured out the best incentives.

Near = ETH 2 roadmap, but actually executed and released.

What does that even mean? It means that they use something called “sharding.”  Which is splitting the network into tiny, bitesized pieces so everything gets done faster and more efficiently.

Because of this, they can actually run a bunch of different apps in parallel, simultaneously.

That's the dream of ETH 2, faster and cheaper transactions and increased network throughput.

So what does Naval think will happen?

He doesn't think it's a zero sum game anymore.  Multiple layer 1's can win and will be great for different use cases.

P.S. if you haven't read it yet, this thread on how to get rich by Naval is incredible

Alright, hit reply or shoot us a DM on twitter with what you thought of today’s edition! 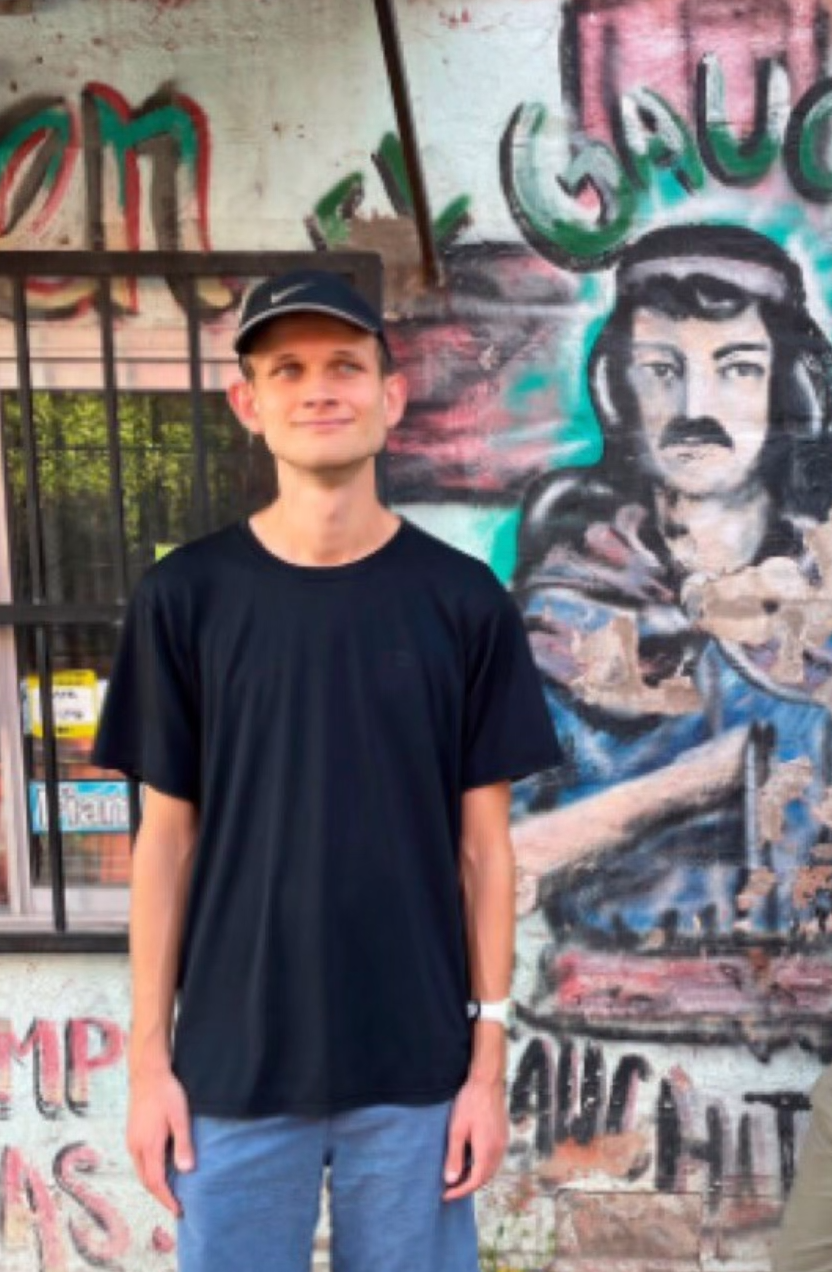