GM. This is the Milk Road, we cut the crypto sandwich into triangles, just the way you like it.

We’re skipping price action today, because we have a LOT of juicy stuff to go over.

Day 2 of The Bitcoin Conference was fire, so I watched all the talks and summarized all the important stuff for you.

"WARREN BUFFETT IS A SOCIOPATHIC GRANDPA FROM OMAHA" - PETER THIEL

Peter Thiel (co–founder of Paypal, and first investor in Facebook) got on stage and gave a crazy talk.

I kept a running diary of my thoughts during his talk:

0:04 - They start by playing a video clip of Peter talking at a conference in 1999. He’s making 2 predictions:

2:40 - OK, the real Peter is on stage now. Crowd cheers. They sound a little tipsy even though it’s 11am.. Nice. This is why we do conferences in Miami.

He starts off with a bold move. He’s waving a stack of $100 bills in the air.

He asks: “what is money?,” “this always gets people's attention,” “it’s not good as toilet paper. It’s not wallpaper. But people want it. Do you want it? Come get it!”

3:16 - He throws the wad of cash at someone in the crowd then laughs as they fight over it: “I thought you guys were supposed to be Bitcon maximalists.” The joke lands.

3:30 - He talks about the early days of PayPal. Shows a picture of him and Elon Musk (they were both CEOs of Paypal early on). Pretty wild to think about how much talent was in 1 startup.

Here’s who worked at Paypal:

This is called the PayPal mafia^. What a killer roster of talent. OK, back to Peter’s talk:

3:55 - He shows a slide from the first pitch deck of PayPal. The initial idea was a lot like Bitcoin. A currency that lived outside of the banking system. He said “we didn’t know anything” back then, but they had big ambitions. 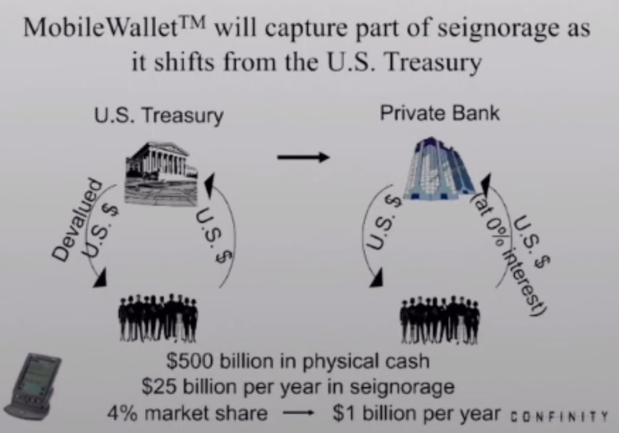 4:12 - But that was really hard. So within a couple years, they had created PayPal. Which worked with the banking system instead of replacing it. This was more practical, but less ambitious. It was just a payment system, not a new kind of money.

Peter points out an important thing about money. Velocity.

The simple idea is that people will spend their “less valuable” money first. Back in the day, people would hoard gold, and spend silver.

Today, people will save Bitcoin, and spend dollars.

This means some money moves “fast” throughout the economy (hopping from person to person). To most people, that makes a currency more valuable! It’s being used! Must be more valuable, right?

The velocity theory says that’s wrong. The slower moving money will end up being higher priced. Nobody is ‘holding’ the fast money, so it doesn’t go up in price (sellers willing to sell).

For a deep dive on this, read this Velocity of Money post.

Anyways, Peter’s belief is that Bitcoin is “slow money” and therefore, it’s valuable money. He says Ethereum is a payments network, high velocity, and lower value. 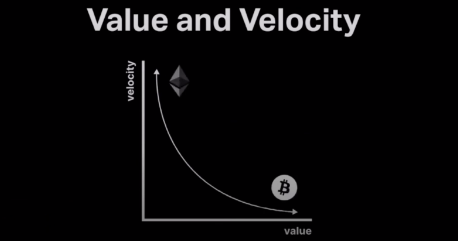 If Peter’s right, Bitcoin will end up a lot more valuable than ETH over time. (Editor’s note: I totally disagree. I think he’s wrong in thinking ETH is a payments network)

7:36 - OK, this is where the talk starts getting aggressive.

He puts up this slide. The crowd goes wild. Crypto is so tribal.

He is trying to talk but you can barely hear him, because the red-blooded-american crowd is going wild for no reason. 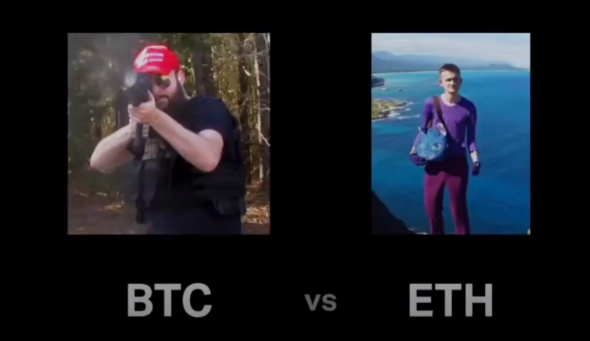 He points out that Gold has a total market value of $12T, and the biggest payment network (Visa) is worth 26x less.

Fast forward to today, and stocks are worth 10x the total value of gold. 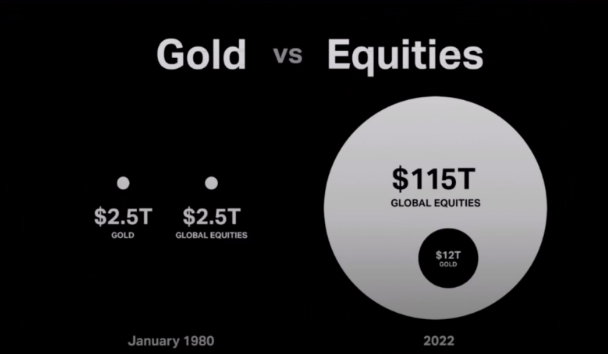 His point is that thinking of Bitcoin as “digital gold” is underselling how big it can be. Perhaps it will be on par with the S&P 500 (which today is a way that people store their wealth).

“Bitcoin is the most honest market in the world. It went from $5k to $50K in the last 2 years, showing us that inflation was real, and the central banks are bankrupt. This is the end of the fiat money regime.”

“Mr. Powell should be extremely grateful to Bitcoin. It’s the last warning they are going to get. They have chosen to ignore it, and will pay the consequences for it in the years ahead”

Enemy #1 - The Sociopathic Grandpa from Omaha 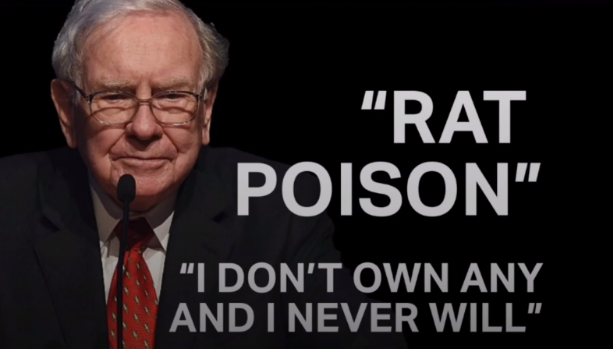 He’s honest about his hate for Bitcoin. He’s incentivized to hate Bitcoin for 2 reasons:

For years they called crypto “worthless.” Now it is undeniable, and they are losing customers, so they’re pivoting to offering crypto assets.

Now you go to GoldmanSachs.com and see stuff like this: 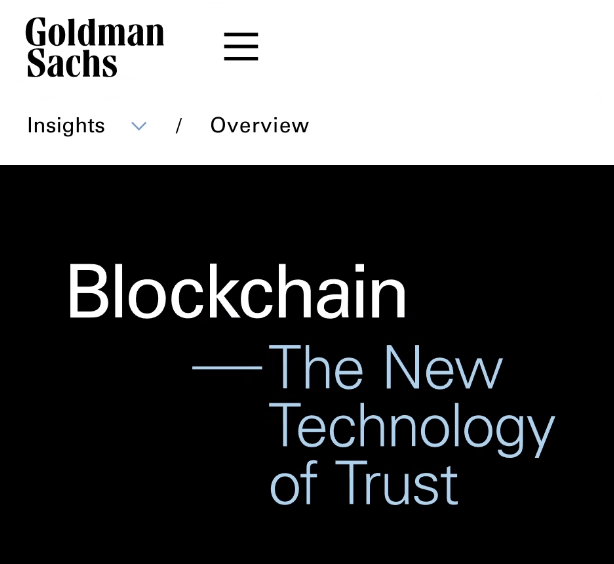 These people hide behind a more passive-aggressive tone. They say things like “I see huge opportunity in blockchain”

Anyone who says they are “pro-blockchain” is actually “anti-bitcoin” according to Peter. 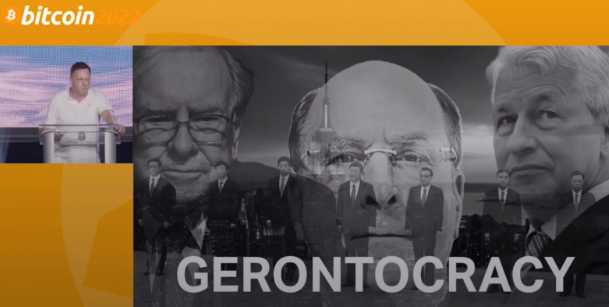 He ended with this hilarious slide design. He calls these enemies the “gerontocracy” (aka old rich). I gotta say, whoever photoshopped this slide is my hero. Pure art. Genius. Like Picasso in his prime.

He says it’s OLD vs. YOUTH. And calls bitcoin a revolutionary youth movement. His final line: “We have to leave this conference and take over the world.”

I’ve listened to Peter Thiel for over a decade. The guy is super smart and loves to go against the grain. He’s great at doing this, painting an enemy, and getting people’s attention with bold claims.

On one hand, I love the conviction he has for Bitcoin, and think that it’s cool he’s been predicting this since 1999.

On the other hand, I think he’s wrong about Ethereum, and I find the whole tribal / “us against the world” thing from the conference to be a turnoff. The macho attitude just feels very forced when nerds do it.

I mean look at this. Michael Saylor came out for his talk and hit the crowd with the 1999 “Raise the Roof” move 🤣

Jack Mallers, the founder of Strike, announced they have partnered with the POS  companies that power huge stores like Starbucks, McDonalds, Walmart & Walgreens to allow anyone to pay in-store with Bitcoin over the lightning network. Every credit card swipe has a 3% fee and is slow to settle. Lightning is essentially free (~0% fee) and settles instantly.

Cash App announces their new crypto services that will 1) let users auto-invest a percent of their paychecks into bitcoin and 2) round payments up to the nearest dollar to buy bitcoin with the difference (kinda like Acorns).

Ricardo Salinas, a Mexican billionaire, says his liquid portfolio is 60% Bitcoin. In 2020, Bitcoin only made up about 10% of his portfolio.  That’s what we call growth, baby!

TODAY'S MILK ROAD IS BROUGHT TO YOU BY CRYPTOTRADER.TAX

When it comes to taxes, there are two types of people.

With less than 2 weeks left to file taxes, we’ve partnered with Cryptotrader.tax (soon to be CoinLedger) to make sure you got everything you need.

“I don’t get taxed until I cash out to fiat”.

We hate to be the bearer of bad news, but you do in fact realize taxable events and capital gains when trading crypto > crypto.

It sucks, but that's the law for ya.

You can save yourself hours of work and get 20% off at checkout right now using code: MILK.

Over $700M was raised in Web3 companies and funds this week! Who got the bread this time?

Dank Bank got $4.2M to let people buy & sell Memes as NFTs. Sounds silly, but…Meme’s are a part of culture. They are globally recognizable. Maybe memes will be collected as other works of culture & art?

Fractal got $35M to build a new NFT gaming marketplace. This is Justin Kan’s new startup (previously JustinTV, Twitch). Worth keeping an eye on

Leap got $10.2M to build out a “super” wallet for the Terra ecosystem that can show off your NFTs, track the value of your wallet, and integrate with the most popular Terra protocols

GOALS got $15M to build the “FIFA of Web3” utilizing NFTs. The cool thing here is you’ll own all the assets in the game - from the players to the cleats they wear - and it can all be sold or traded. They still need to build an awesome game though..

Hivemapper got $18M to build a decentralized Google Maps by giving drivers digital tokens to put dashcams in their cars. You know we love easy ways to make money. (They’re leading the wave of IRL → tokens that we talked about here).

Dive into our full database of companies that have fundraised here!

SIT BACK AND RELAX THIS WEEKEND WITH THE VITALIK SPECIAL

Send a video of you drinking a Vitalik cocktail to @milkroaddaily on Twitter and we’ll retweet it!