GM, This is the Milk Road. We help you get smart about crypto, in less than 5 minutes a day.

Vitalik posted a blog with an NFT concept called “Soulbound”

He got the idea from World of Warcraft - where some in-game items cannot be bought/sold. They can only be earned by doing specific quests (and never transferred).

In life we have many soulbound items:

Vitalik thinks we should build a type of NFT that is “soulbound” (can’t be bought or flipped for profit). This NFT would prove that you truly did something.

Right now, most NFTs are for signaling. Eg. if I own a Cryptopunk, that signals that either I was early to NFTs, or I’m rich and bought one.

With a soulbound NFT, your signal isn’t just “I’m rich, bitch”. It means you did a specific thing.

One example is POAP (proof-of-attendance-protocol).

This lets you create NFTs for people who “attend” your event.

So you go to a concert, or game, or conference, and you get the NFT badge for attending. This is great, but since it can be bought/sold, the person with the badge may not have actually attended (they might have just bought it).

If someone can figure out how to make non-transferrable NFTs, this would open the door to other things going on chain (eg. drivers license, college degrees, etc.)

Speaking of… check this out. Instead of college degrees, here’s a different…um.. Badge of honor that is being saved on-chain.

There's apps popping up that look at all your DeFi activity (from your wallet address) and then generate a score on how “degen” you were. Sounds silly, but I think this is great.

For example, the Milk Road is growing and we need to hire someone to help out. They could send me some resume PDF or an email telling me how much they love crypto.

But what if they sent me a high degen score, showing me that they love crypto. Who would I rather hire - a harvard business school grad? Or someone who bought ETH in 2017, then was betting on a dozen ICOs in 2018, lost money flipping NFTs in 2019, etc..

That’s a true track record of action, not just words.

The more people write content (eg. on Mirror), check in code (on platforms like Radicle), buy NFTs, and invest in tokens.. You will see when & how they took action.

This cuts both ways. If this existed in Web2, anyone could have seen that I was buying rosetta stone’s from china and flipping them on eBay when I was 16 (sorry mom!)

Every Monday, we'll share some of our best discoveries from the weekend

We covered the Wonderland drama last friday (the CFO was revealed to be a former criminal/fraudster).

Here’s what’s happened since then: 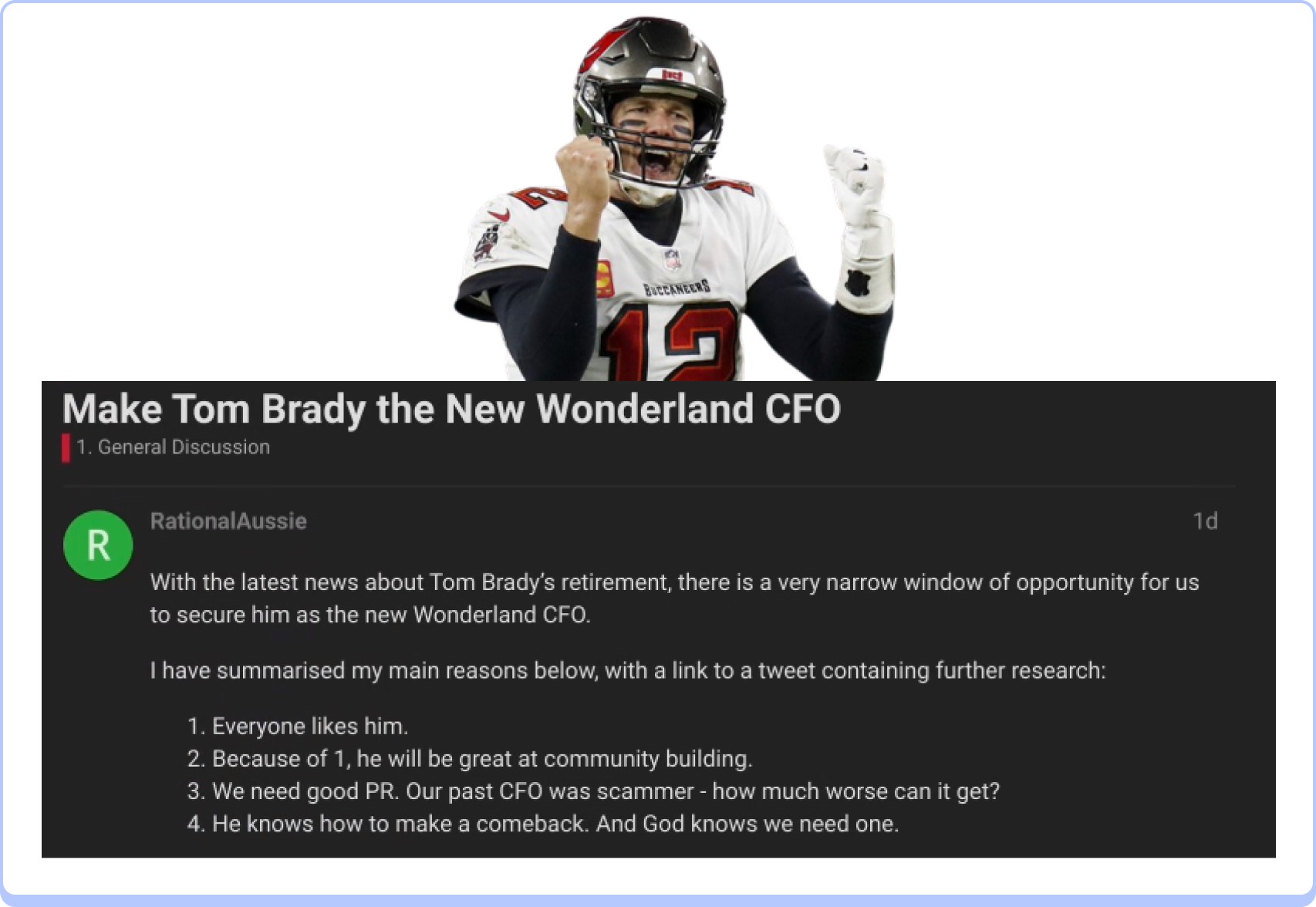 Here's the full proposal if you wanna peep it