Let's get into it: 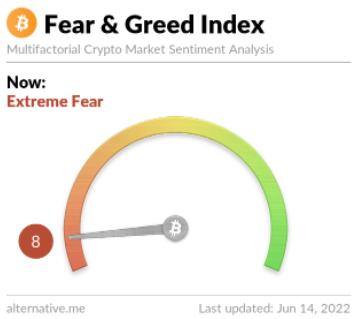 THE 3 STAGES OF A BEAR MARKET

Prices continued to drop like bricks in the ocean, and my Twitter feed was up in arms. It felt like I was reading the graffiti inside middle school bathroom stalls… 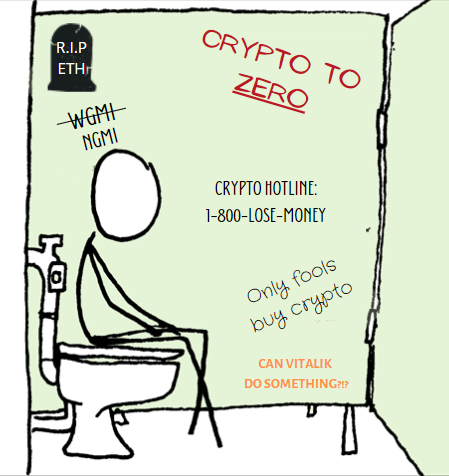 But there was one really good thing I read amidst all the chaos yesterday. It was called “3 Stages of A Bear Market” from our buddy Jason Yanowitz over at Blockworks.

It was the best damn thing I read all day. So in Milk Road fashion, we’re gonna share it.

Jason splits the bear market into 3 different stages and he thinks we just entered the second stage of it.

In Stage 1, the excitement (and greed) from the bull market still exists.

Mini-narratives pop up for weeks at a time. Assets still have floors. Valuations are cut but companies don't make the tough decisions (kill products, layoffs).

Stage 1 doesn't *feel* like a bear market. It feels like prices have pulled back to "realistic" valuations.

This is where it gets ugly.

Narratives die. Prices fall 90%... then another 90%. Layoffs across the board. Mainstream media and cynics rise up in Stage 2. They laugh and shout "I told you!"

Luna sent us into Stage 2.

Celsius doesn't want to sell – they might have to sell. There will be more funds, companies, and individuals like Celsius.

In Stage 2, any bounce will be immediately sold into. The dead cat bounce.

Companies that need high token prices will be crushed. Founders that buy their own tokens to sustain their projects… they'll also get crushed.

In Stage 2, prices crash violently. Excitement is replaced by anger.

There are no bounces. There are no narratives. Prices consolidate sideways or slowly move down. It's boring. At the bottom, anger is replaced by silence.

During Stage 3, you'll want to walk away.

Regulators will kick us while we're down.  Your favorite Twitter degens will go quiet. Web2 investors will quietly stop allocating. Talented builders will leave. Companies will shut down. You'll question every assumption you had.

Stage 3 is the toughest to survive.

If you're a company, do whatever it takes to get through. If you're a builder, stay interested. Find other builders. Buidl with them. If you're an investor, develop your own theses. Take bets on people you believe in.

Don't lose sight of the big picture. We're building an open, permissionless world. It will take decades, not years.

Close the computer, zoom out, go for a walk.

Just don't give up.

As Jason mentioned, in Stage 2, there’s a lot of forced selling aka liquidations.

And right now there are three big dominoes that we're watching:

This isn’t too worrisome yet since Microstrategy still has billions of unused Bitcoin collateral to put up. However, there is a much bigger liquidation that would happen if Bitcoin reached $3.5k. Even then, Saylor says there is additional collateral they can post if it came to it.

We’re keeping a close on this one since Microstrategy is one of the top Bitcoin holders.

Celsius has stopped allowing withdrawals because they are facing liquidation problems. And it’s been a game of back and forth for them.

At first, their liquidation price was ~$22k, but they’ve been putting up more and more collateral as the price of BTC drops, to avoid liquidation.

As of now, they’ve put up $535m in Bitcoin collateral to bring their liquidation price to $15,100. As long as the price stays above that, they’re in the clear.

But if it goes under, that’s another half a billion dollars worth of BTC getting sold into the market. No Bueno.

Times like these can feel especially bad, especially when the media adds fuel to the fire and your Uncle Joe says: “Told ya crypto was a scheme!”.

So let’s jump into a time machine and look at 8 headlines from previous bear markets:

Headline: The End Of Bitcoin

Quotes: One of the signs that Bitcoin is dying is that hardly anyone actually uses the currency. The Bitcoin network is fading away and the price is destined to continue its downward march. This is likely to be the last year people take Bitcoin seriously (if last year wasn’t already). Whether Bitcoin disappears with a bang or a whimper, the end is coming.

Hate to break it to ya, Rob, but 1/ 2015 was definitely not the last year people took Bitcoin seriously and 2/ you missed out on a 100x gain

Headline: Bitcoin Isn’t The Future Of Money — It’s Either A Ponzi Scheme Or A Pyramid Scheme | Washington Post

Quotes: It’s not clear what Bitcoin is or what it will be, but it is clear what it’s not. It’s not a currency. People don’t set prices in Bitcoin and, for the most part, don’t buy things with it either….

You can buy lots with crypto now - cars, movie tickets, college tuition, etc. It’s even a legal currency in some countries. Shoutout to El Salvador and the Central African Republic.

Headline: Bitcoin Will Bite The Dust

Quotes: Even in the unlikely event that it survives into the medium run, we would still rate its longer-term chance of survival as zero.

This was actually a 26-page paper on the end of bitcoin.

The only thing that bit the dust are the investors that missed out on such cheap prices. $300?!?

Headline: Bitcoin Will Never Be A Financial Mainstay

Quotes: Bitcoin, with all the noise and talk of large-scale acquisitions, is just a playground for those wanting a quick buck and will never be part of the genuine electronic financial markets economy.

It's only a matter of time till we're able to use crypto to buy almost everything. It'll be the largest playground there is.

Headline: Jamie Dimon And Warren Buffett Have The Last Laugh On Bitcoin | Bloomberg

Quotes: Nothing on the Bitcoin label turned out to be in the bottle. As a means of payment, it is cumbersome, volatile, and expensive. It has destroyed value rather than storing it. Its decentralized technology was sold to investors as being unique. It has been anything but.

The only thing to laugh about is how quickly Jamie Dimon switched teams. Now he wants JP Morgan to lead the crypto movement. But we got the receipts!

Headline: Bitcoin Has No Unique Value At All | CNBC

Quotes: “Bitcoin has no unique value at all. It is a delusion, basically. If you do something phony by going out and selling yo-yos or something, there’s no money in it — but when you get into Wall Street, there’s huge money. It attracts charlatans.”

There goes the sociopathic grandpa from Omaha again.

As we’re entering phase 2 of the bear market, what are you doing with your crypto?