GM, this is the Milk Road.

No crypto prices in the email today.

Because it feels silly for us to talk about prices when a war just broke out.

Look, we know our role. You don’t read the Milk Road for politics.

We are your tour guide on the wild ride of crypto.

But today, I wanna dive into how crypto is being used in this Russia / Ukraine war.

Ukraine vs. Russia is a schoolyard mismatch.

But Ukraine has most of the world on their side. So, the official Ukraine twitter account sent this tweet over the weekend, asking for Bitcoin & ETH donations: 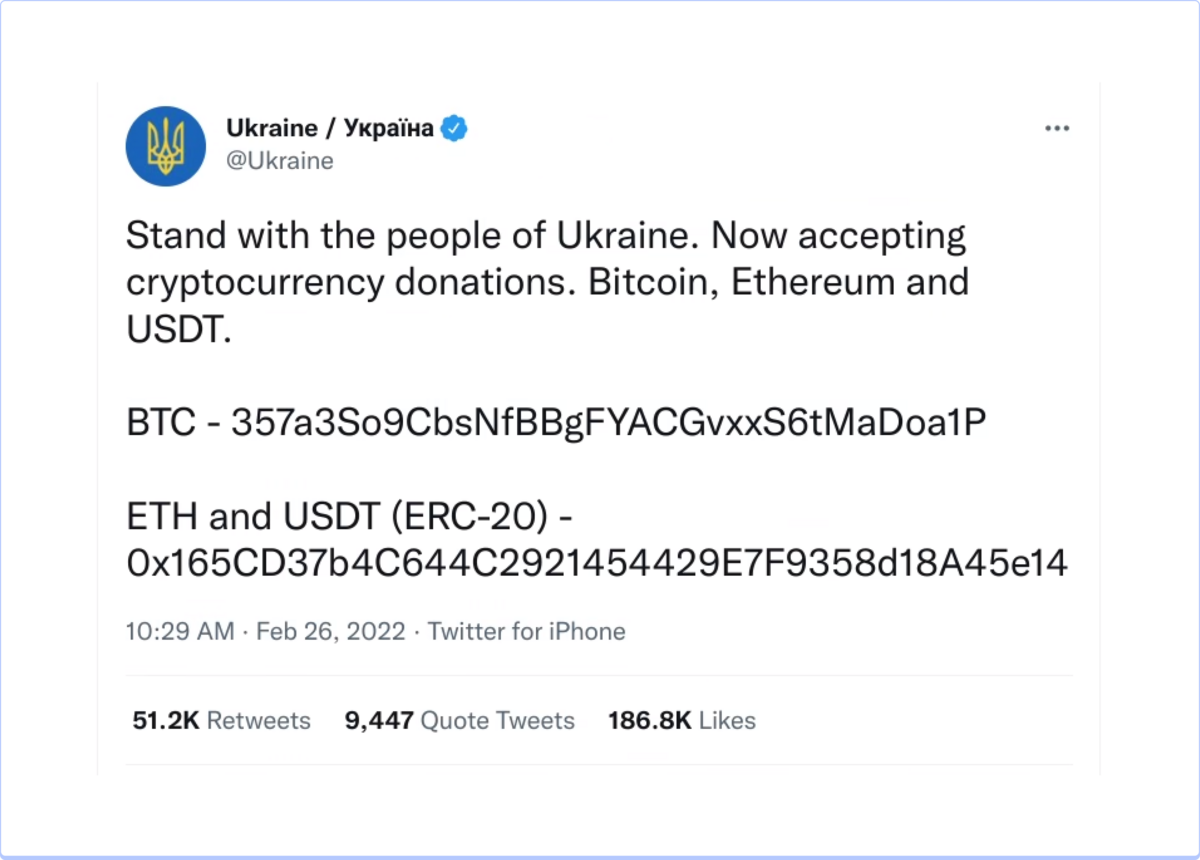 And the bell was answered, with over $15M donated in crypto so far.

You can even see which ETH wallets donated the most. Check this out...OnlyFans - donated a massive ~$1.5M from their wallet Only.eth. Respect.

And just by reading this email, you’re doing your part too. We are donating 100% of today’s Milk Road sponsor revenue to Ukraine’s official ETH wallet. You can see the transaction on Etherscan here.

Crowdfunding the underdog to defend itself from an invader is a feel good story.

But let’s look at what’s happening to Russia.

The Western world (US/EU) wants Russia to end the invasion, but doesn’t want to send their own troops in.

So instead, they are hitting Russia hard from other angles. Effectively, financial & cyber warfare.

The West is fighting with banks, not tanks.

Then, they cut them off from SWIFT (effectively, blocking the ability to conduct international bank transactions).

This caused the Ruble (Russia’s currency) to crash. It’s currently down 20% in the past 24 hours.

To put that into stunning context. 1 Ruble is worth less than 1 Robux (from the kids game, Roblox). 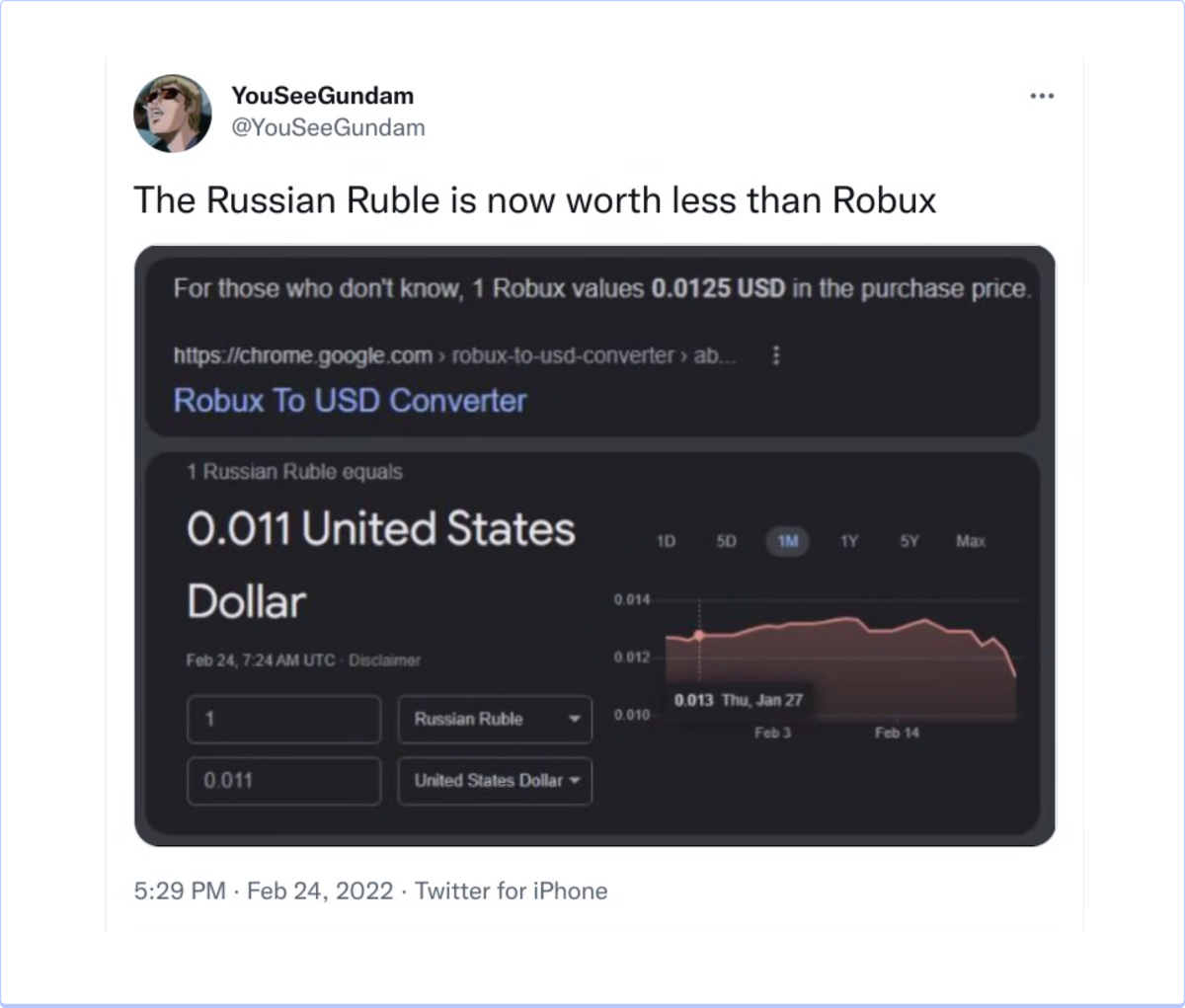 This is going to really hurt people living in Russia (many of whom don’t support this invasion).

Their entire economy and savings are tanking. They are paying for Putin’s war.

This kind of shock can trigger a bigger crash. People panic, and start running to the bank to pull out their money.

Just look at this line for an ATM in a McDonald's in Moscow yesterday: 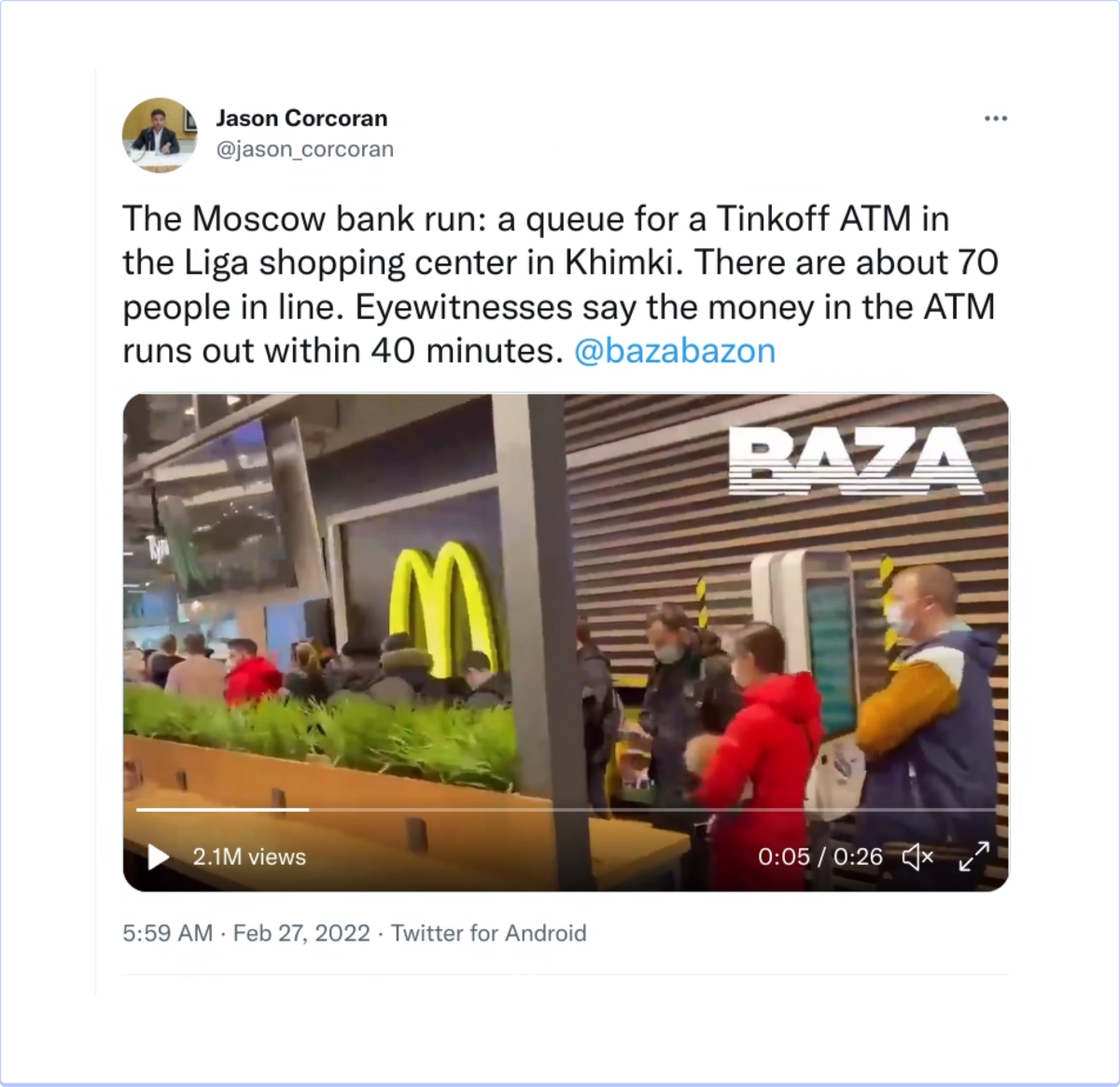 Then speculators start to “short” the currency, causing it to drop even faster.

So what will Russia do?

Typically, they would use their foreign reserves to buy Rubles to stop the price from crashing.

The Russian government has hundreds of billions of “reserve assets” (Dollars, Euros, Gold, etc.) stashed away.

But…two thirds of those are held in Western bank accounts, and the EU just announced a first-time-ever move to freeze ~$300-400B of the $650B Russian Central Bank’s assets that were held in the west.

This is what people are calling the ‘financial nuke,’ leaving Russia with very few options.

What if Russia Turns to Crypto?

With their own currency crashing, and bank accounts frozen…what if Russia turns to crypto?

Well in some ways, it’s too late. Russian citizens probably wish they had stored their life savings in a different currency (one that isn’t being devalued a ton).

The Russian government probably wishes it’s Central Bank reserves were on an unstoppable network like the blockchain.

Two thirds of their Central Bank assets were frozen with a single keyboard stroke.

A good friend of the Milk Road, the brilliant Balaji said yesterday: 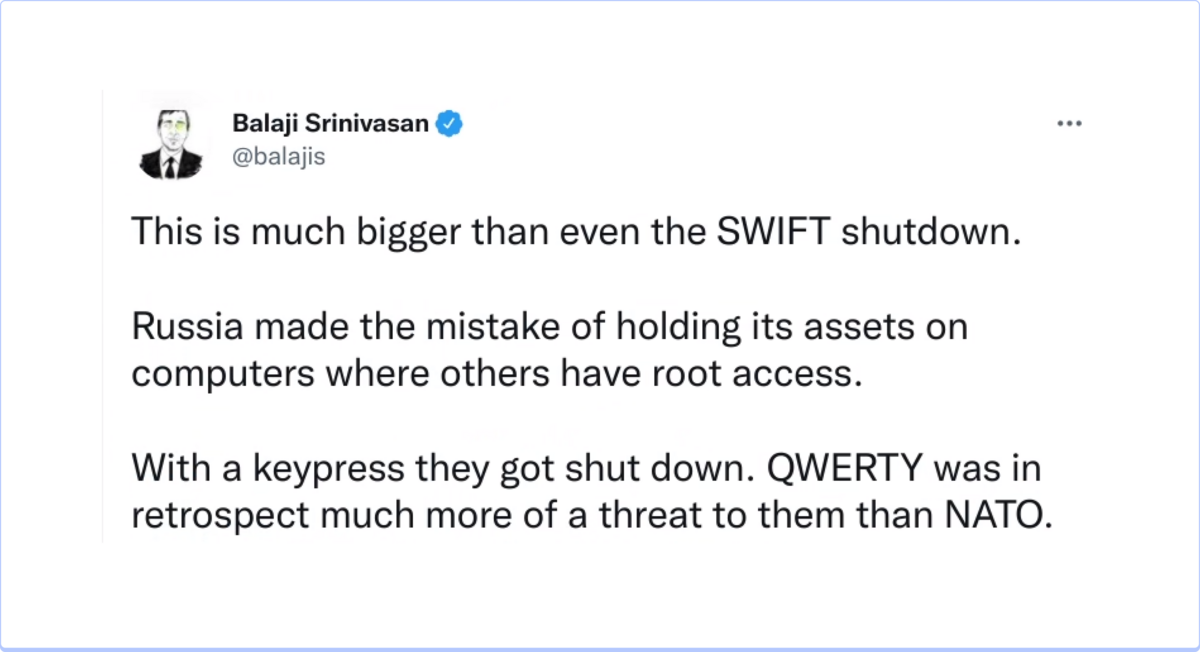 In the future, more citizens and countries will hold reserves in crypto. This will enable them to get around the financial censorship that we see today.

For example - the US hit Iran with a huge embargo, preventing imports of their oil.  Iran then had a huge surplus of energy that they could no longer export.

So they started using that excess energy to mine bitcoin to get around sanctions. This made Iran over $1B+ every year, and represents >4.5% of all bitcoin mining globally.

But how do I feel if a dictator uses crypto to avoid sanctions and fund wars?

At first, it felt uncomfortable. But then I put it all into context.

It’s like saying “I wish bad guys didn’t use ‘cars’ to get away from a crime scene.”

Cars are neutral. They can be used for good or evil.

Crypto is the same. So are computers, steel, and the internet.

As Vitalik (who was born in Russia, but doesn’t support the invasion) said:

OK, that was pretty heavy. Let’s finish off with some non-war news nuggets...

Okay, quick sidebar to talk about one of my favorite communities…Trends.

Trends has a full research team hunting down the next big thing. They break down the latest market trends in detail and give you what you need to be ahead of the curve, straight to your inbox.

Plus the community is full of interesting people. I’ve connected with some awesome folks, from small business owners to established professionals, and even investors looking for their next project.

Stay tuned for tomorrow. We have a new section called “Degen Den” where we ask smart friends about the high upside crypto bets they are making.