*Note – This research piece is an expansion on my contribution to Spencer Noon‘s Our Network – a community-led newsletter focused on data-driven insights. If you like this content, make sure to subscribe to the newsletter for weekly releases!

With lending protocols offering substantially higher interest rates than traditional capital markets, it’s no surprise that DeFi lending has captured a majority of the value in recent years.

Of the $743M currently locked in DeFi, lending comprises 76% of the total value as of writing.

While the majority of it derives from Maker acting as a permissionless central bank, we’ve seen multiple other lending protocols emerge in a competition for market share. Protocols like Compound, Aave, dYdX are all competing protocols looking to offer access to the best interest rates and leverage on the market.

Despite the growing competition in the lending sector, one protocol has consistently remained dominant – Compound. The money market protocol is currently aggregating 3x more value than its next competitor, Aave, with nearly $100M in value locked across its asset pools.

A Brief Background on Compound

Compound is an algorithmic Money Market protocol on Ethereum allowing anyone to supply assets and earn interest, or borrow and pay interest.

Borrowers can take out loans on any supported assets, so long as they maintain a 150% collateralization ratio. Assets supplied (or deposited) to a market are represented by cTokens – an interest bearing token accruing interest every ~15 seconds (per Ethereum block).

All asset markets have floating interest rates that adjust in real-time based on market conditions. With Compound V2, supported assets include: 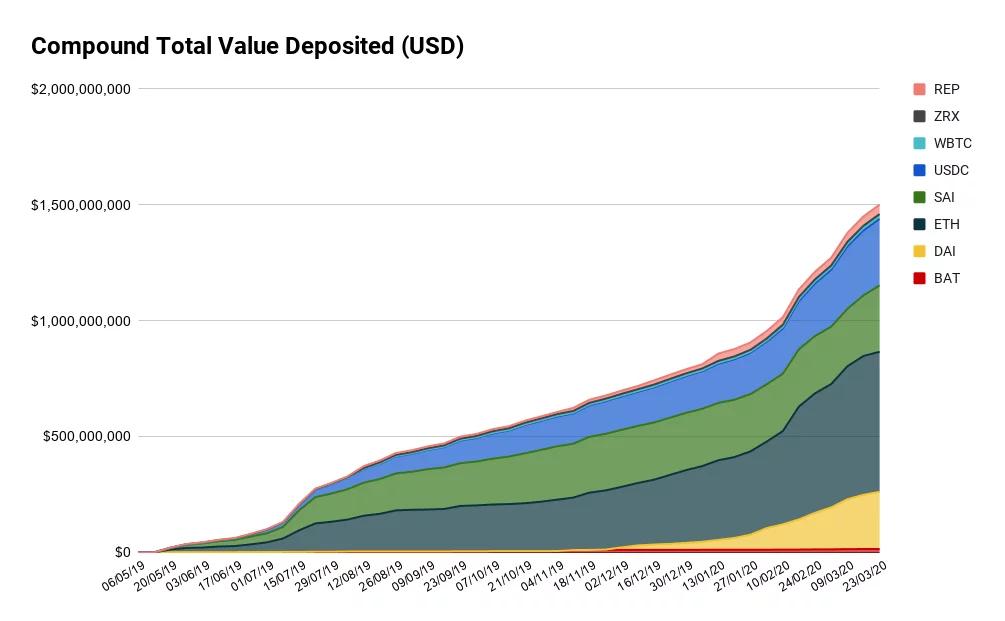 As of March, cumulative deposits on Compound reached $1.5B. Ethereum’s native asset, ETH, has been the biggest contributor to this number, aggregating over $604M in total supplied since inception. With that, a majority of total supplied assets come from the two major DeFi stablecoins: DAI (and it’s predecessor SAI) and USDC. Maker’s Dai/Sai totals for over $532M supplied to Compound, roughly a third of all deposits. The other major money market on Compound includes Coinbase’s USDC with $287M cumulative deposits.

The remaining assets – BAT, WBTC, ZRX, and REP – comprise roughly ~5% of the cumulative supply since genesis.

While stablecoins being the large majority of total deposits is no surprise given the high-yielding interest rates, the most striking finding here is that ETH was the leader in aggregate supply. Lending rates for the asset are <0.01% on Compound with the highest protocol, Nuo, offering 2.35% APY on ETH-based deposits.

Despite the low interest rates, the driving factor behind the significant amount of ETH deposits on Compound largely derives from the users needing collateral to borrow stablecoins (and in turn access leverage). Users don’t necessarily care about the interest rates and are generally more concerned with having access to sufficient collateral. 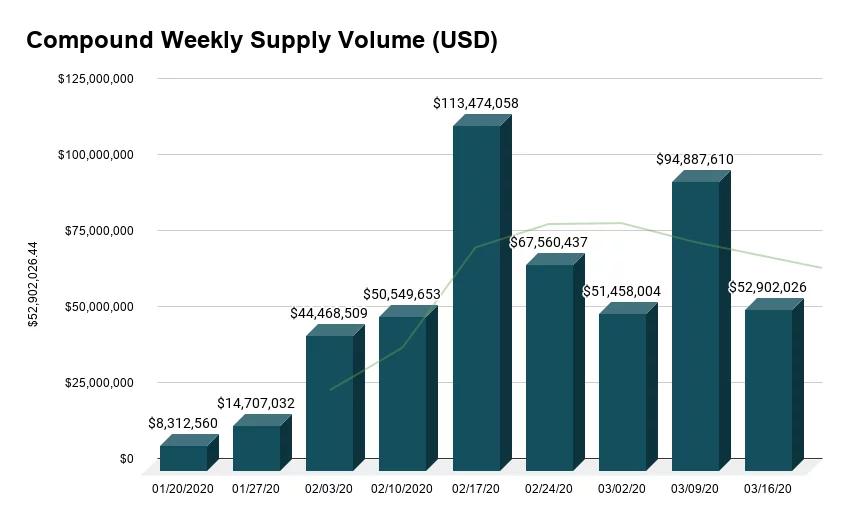 The protocol reached yearly highs of $113M in supply volume on the week of February 17th. The nine-figure record pushed February’s average weekly deposits to just over $69M, beating out March’s average of $66M by 4.34%. Regardless, the steady uptrend in weekly supply volumes indicates that Compound users are continuing to find value in the permissionless money market protocol.

Looking at weekly supply volume by assets, there’s been a surge in Ether deposits. The dominance in ETH deposits made the ETH lending pool the most liquid pool on Compound with over $41.61M in gross supply as of writing.

The biggest jump in supply volume was in February where the protocol saw $83M in ETH supplied alone. While the dollar amounts are skewed due to Ether’s strong price performance in February, total ETH locked on Compound peaked at 517,000 ETH in early March as average weekly ETH supply volume hit $26.85M.

Other assets with notable deposit volumes include DAI and USDC which have remained relatively steady over the past few months. Since late January, DAI has averaged $16M in weekly supply volume while USDC averaged $10.2M. The two DeFi stablecoins continue to see a significant amount of usage as the general theme seems to be depositing ETH and taking out DAI or USDC denominated loans. 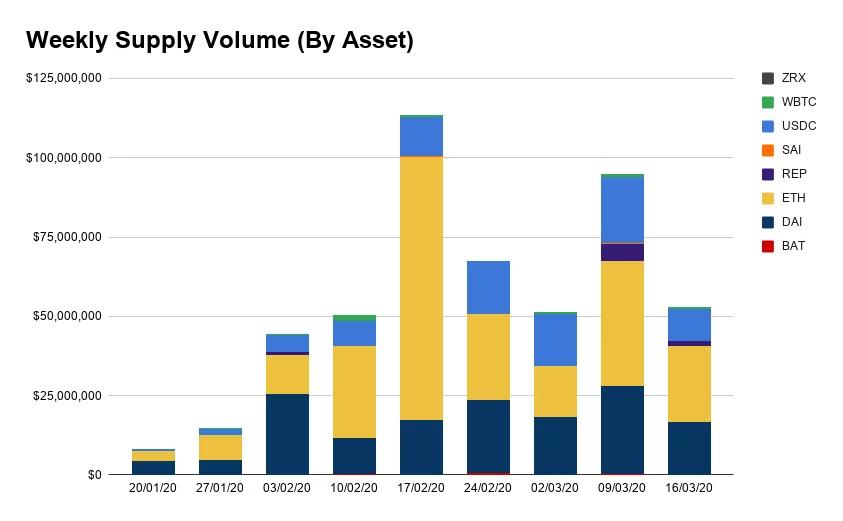 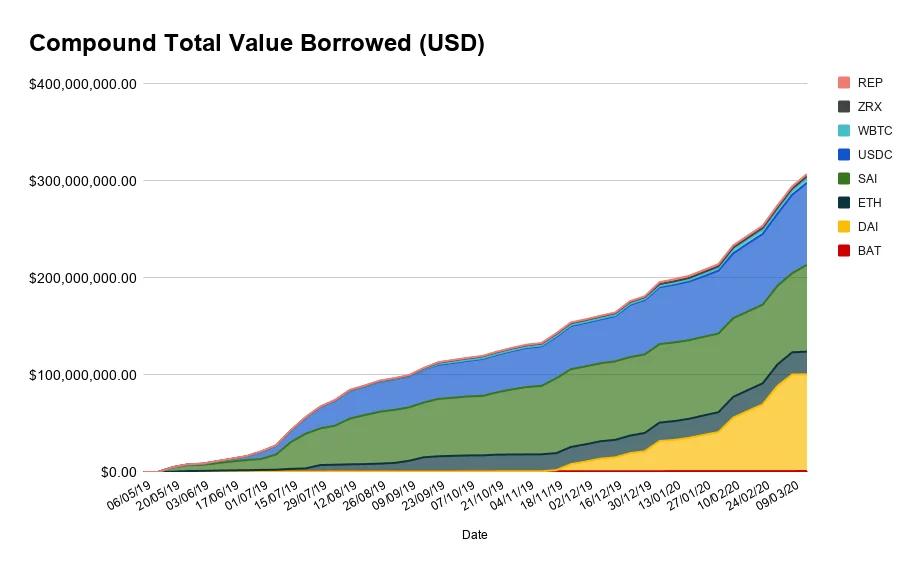 The trend of Compound users depositing ETH to take out stablecoin loans is further cemented when looking at cumulative borrows. The large majority of assets borrowed from the protocol include Maker’s SAI and DAI along with Coinbase’s USDC. As we can see, ETH borrowing only makes up just a sliver of cumulative borrowing activity on the money market protocol (compared to supply activity where it aggregates a bulk of deposits).

In total, Compound has processed roughly $306M in borrowing activity since inception. Of the $306M, $188M or 61% of cumulative borrows has occured in Maker’s Dai or Sai stablecoin. Naturally, the other significant borrowing activity derives from USDC with nearly $85M in total borrows. The remaining assets – ETH, WBTC, BAT, ZRX, and REP – aggregate for around $33.4M borrowed or 10.9% of cumulative borrows on Compound where ETH generates $23M of that value. 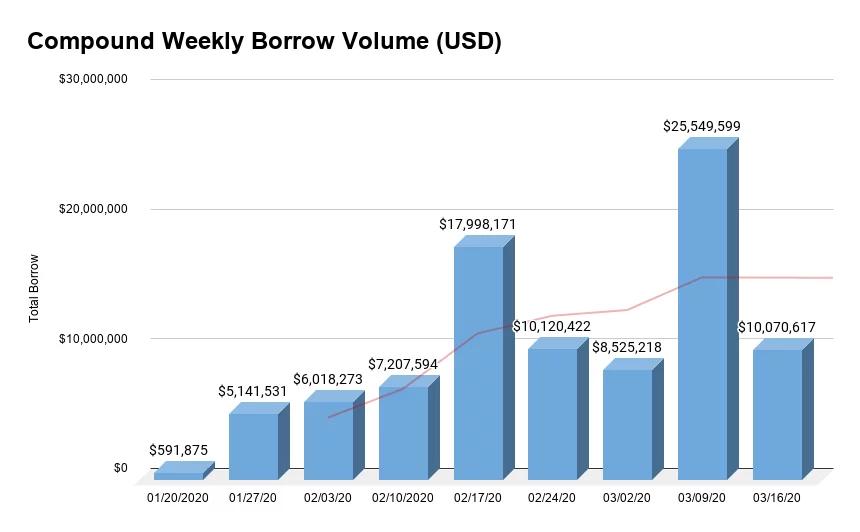 Compound’s weekly borrowing volume has seen a steady increase since the beginning of the year. The lending protocol reached new yearly highs earlier this month after hitting $25.54M in borrowing activity across all supported assets. In March, the average weekly volume was $14.7M, up +42.37% from February’s average of $10.3M in loans originated.

It’s interesting to note that borrowing activity on Compound peaked around Black Thursday – likely as DeFi users flocked to safety amid the significant volatility by borrowing stablecoins.

With that in mind, Compound users are mostly taking out loans in either DAI or USDC – a common occurrence throughout lending markets as a whole. This is largely due to the two stablecoins offering the only attractive yields on the market. Compound’s 30 day average lending rate for Dai is 7.66% while USDC’s sits at 2.27%. In the last 8 weeks, Dai borrowing volumes have substantially outpaced the rest of the field with over $61M in total volume. Comparatively, the second highest is USDC which processed $22.56M in loans over the same time period. 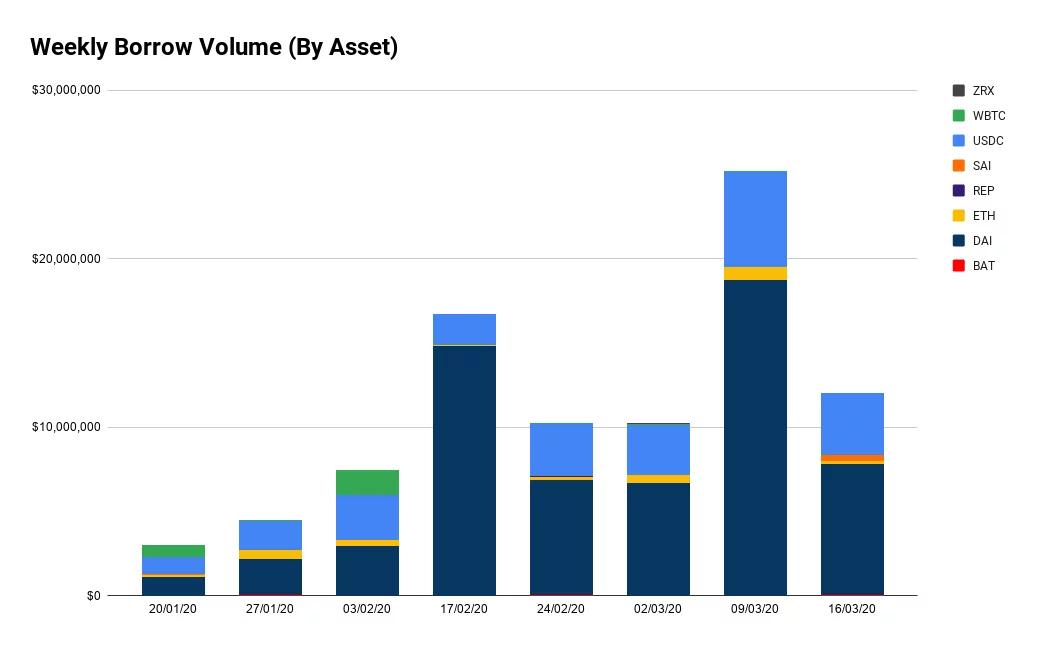 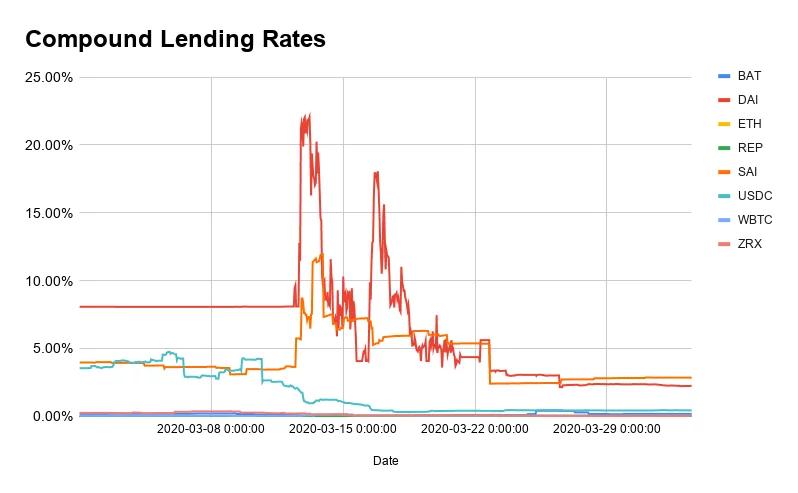 Following the event, lending rates on Compound have taken a dive near historical lows. As it stands today, lending rates on DAI and USDC are 0.36% and 0.41% respectively. Compared to its 30 Day average of 4.31% on Dai loans, this is an unprecedented time in the lending markets.

The light at the end of the tunnel here is when the Dai Savings Rate (DSR) returns to normalcy as it seems to dictate rates on the market – even beyond Dai. 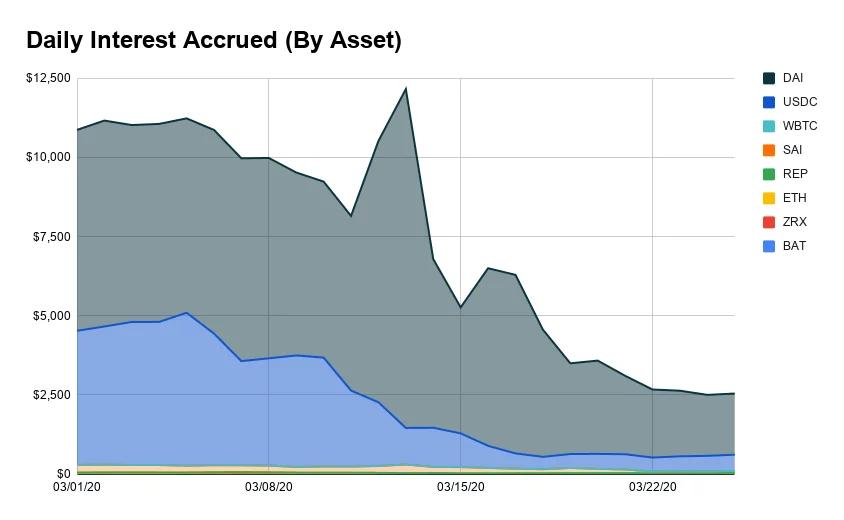 Despite the hit on lending rates, USDC and DAI are the clear leaders in income-generating assets for its holders. DAI accounts for over 68% of total interest accrued this month, generating over $127,000 for cDAI holders. The other stablecoin, USDC, represents 28% of the protocol’s accrued interest in March, earning around $52,000 for cUSDC suppliers. The rest of the assets (BAT, ZRX, ETH, REP, SAI, and WBTC) account for less than 4% of the remaining interest with SAI having the most notable earnings out of the group with $4,323 in accrued interest.

Compound has seen steady growth since inception, reaching over $1.5B in cumulative deposits and $300M in borrowings. While Coinbase’s USDC and Maker’s DAI are the premier assets supported by the protocol, the most notable finding was that ETH aggregates a majority of the value in total deposits. This is largely due to Compound users leveraging ETH’s value as collateral for stablecoin loans, and in turn, access to leverage.

With Compound rolling out its governance token, COMP, it will be interesting to see what changes are made to the protocol. We may expect to see COMP holders vote to expand on the protocol’s supported assets as one of the first moves. Maybe we’ll see other popular DeFi tokens like KNC, SNX or LINK integrated into the lending protocol or even other major stablecoins like USDT or Synthetix’s sUSD.

If one thing is for sure, Compound has established itself as one of the dominant money market protocols over the past year. As we continue to watch the proliferation of DeFi, we’ll be keen on exploring the evolution of Compound and its role as one of the leading lending protocols on the market.