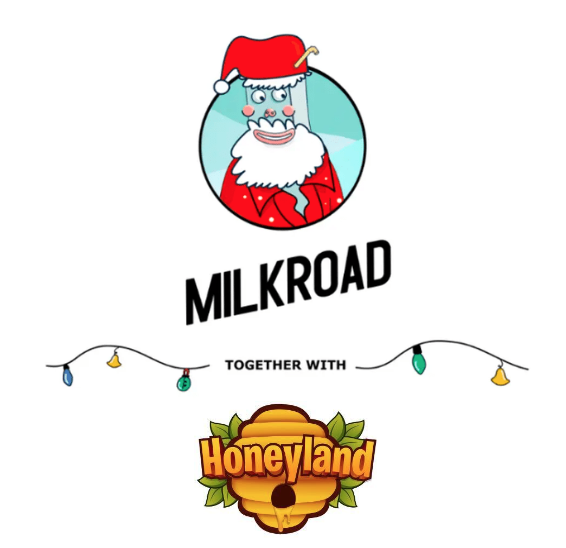 GM. This is the Milk Road, the daily newsletter that makes crypto as exciting as the World Cup Final. And congrats to the Argentine Milk Roaders.

Here's to another 4 years of calling it fútbol, not soccer. 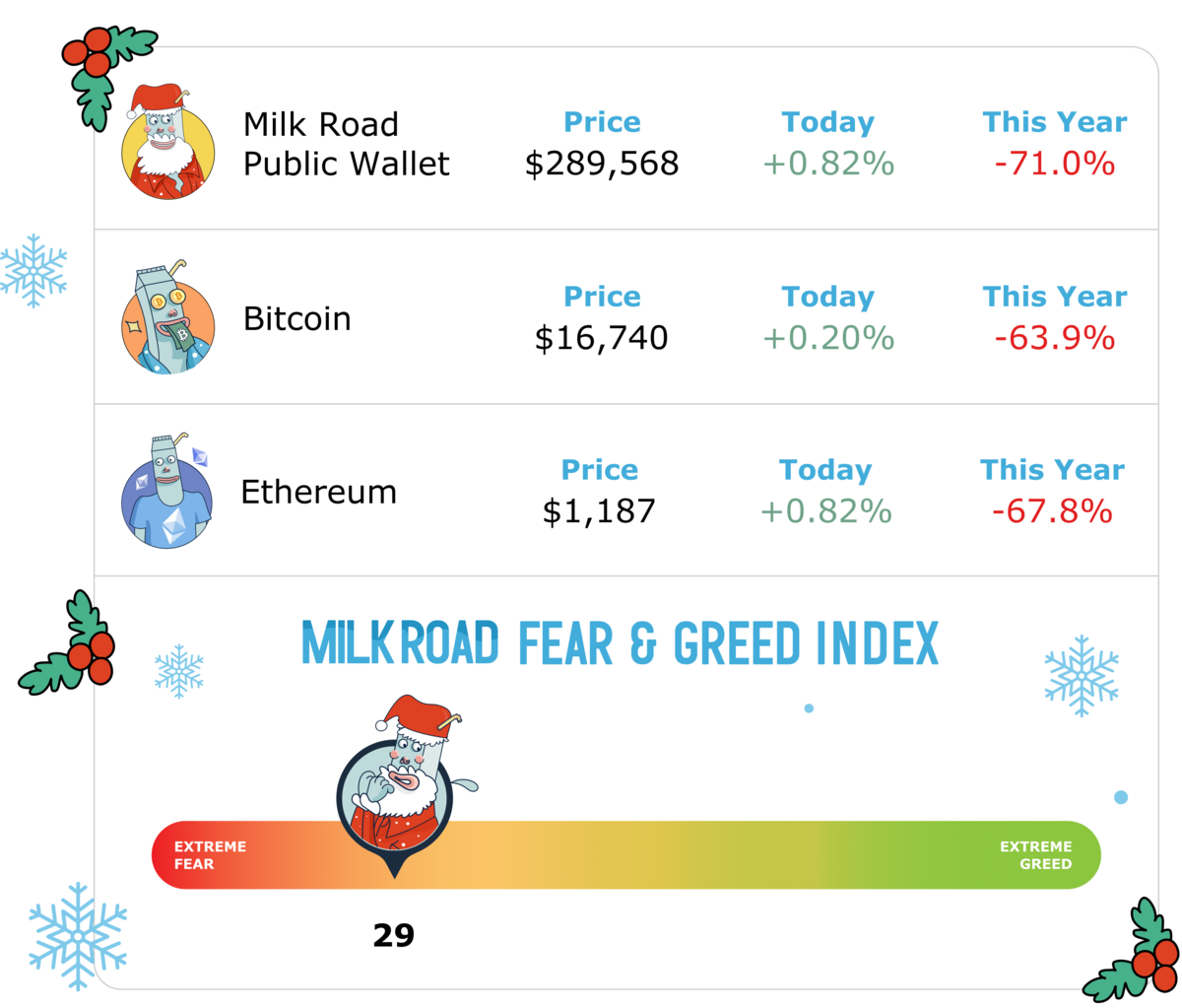 TRUMP'S NFTS PUMP OVER THE WEEKEND 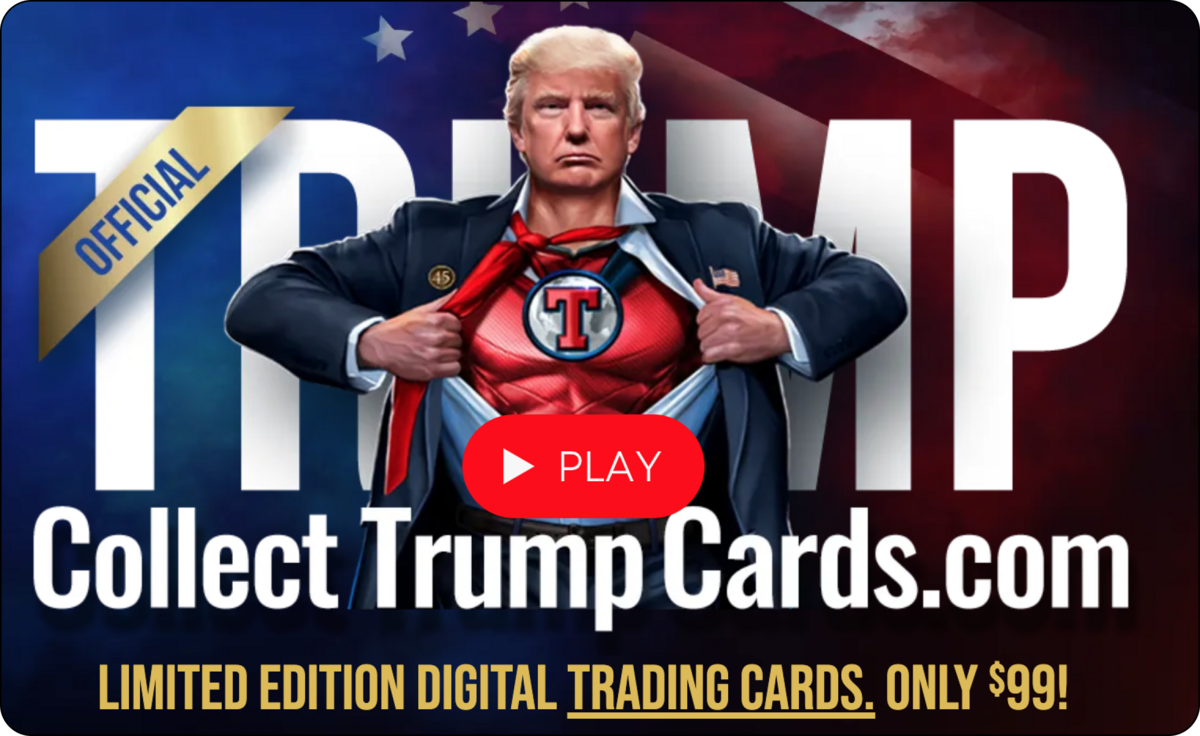 In case you missed it, Donald Trump dropped an NFT collection last week.

That’s right. From businessman → TV personality → President → NFTs. (And some stops to the tanning parlor and toupée shop in between.)

And boy, were these digital trading cards the talk of the town this weekend.

Why? 3 reasons… The art. The marketing. The execution.

There's no other way to put it...the art is awful. 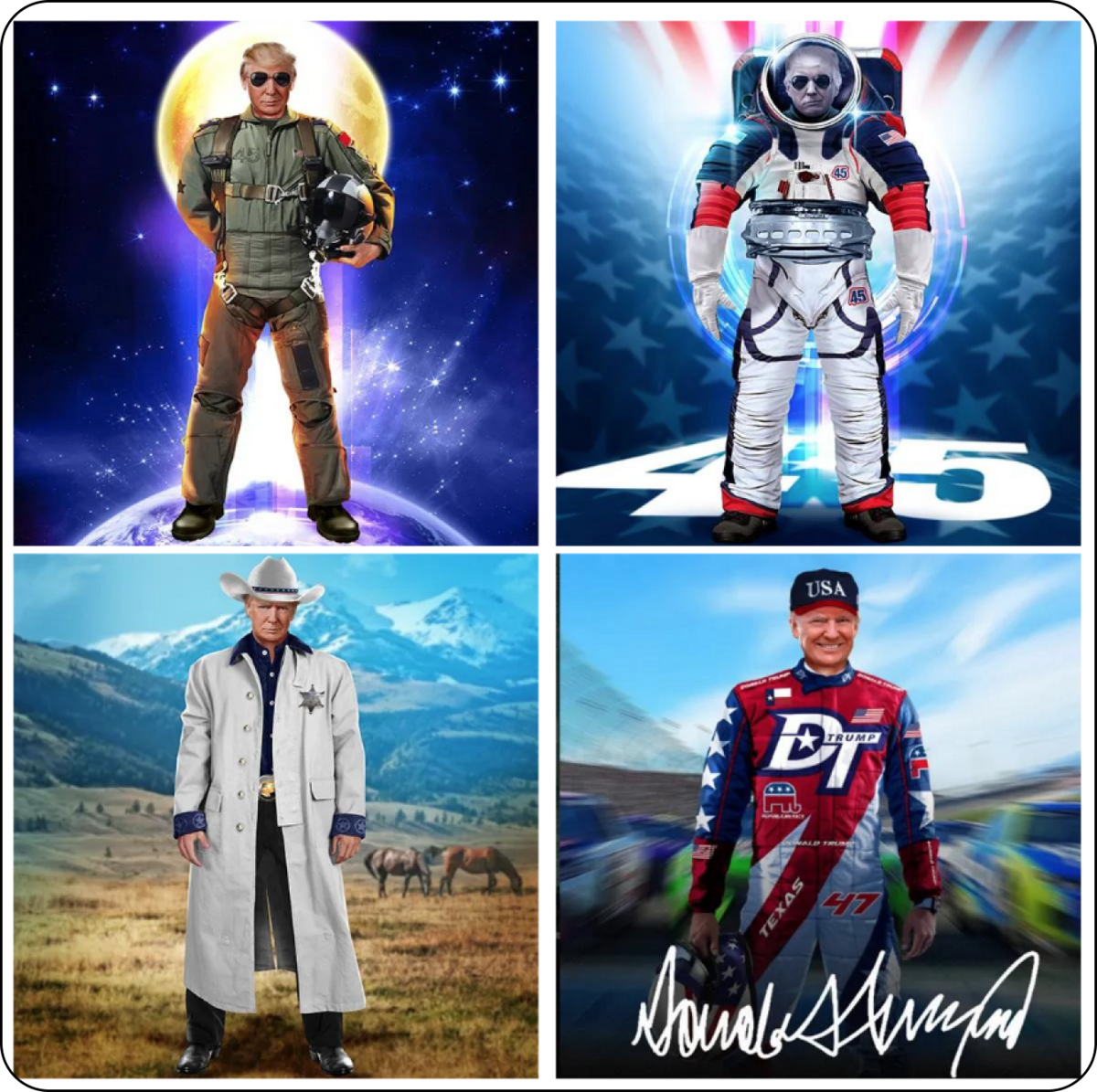 It looks like Don hired my 6 yr old niece to use Photoshop (btw, she has no idea what Photoshop is.)

But here’s the real kicker. Just take a look at the description of the collection.

Incredible? The Milk Man had better art in the 3rd grade.

Donald’s marketing team took a page right out of the 2000’s infomercial “playbook."

“Your chance to win amazing prizes!”

It was somewhere in between an OxiClean ad & Celine Dion selling me CDs at 2 a.m. 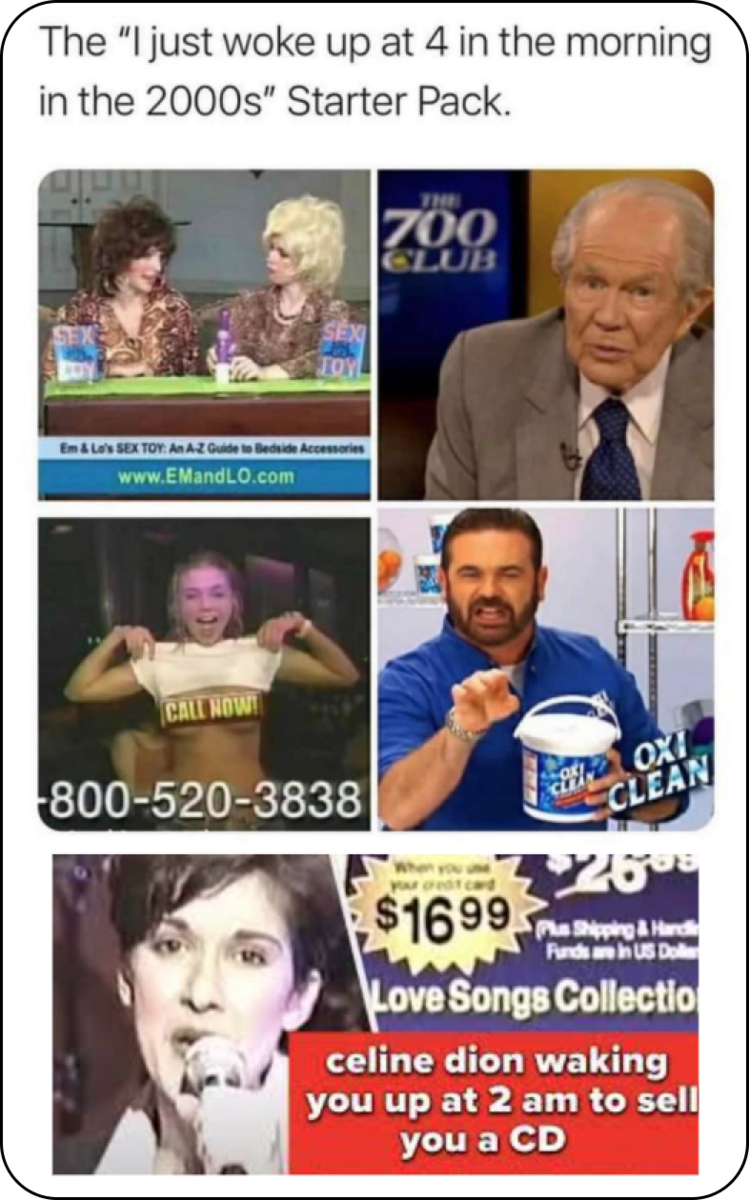 So, how successful was it?

The collection has done $2m+ in secondary sales and jumped 700%+ in price over the weekend. It’s the #2 trending collection behind the Bored Apes.

But a few people have pointed out some *irregularities*...

Oh, and the Trump NFT company's address on the official website points to this building. 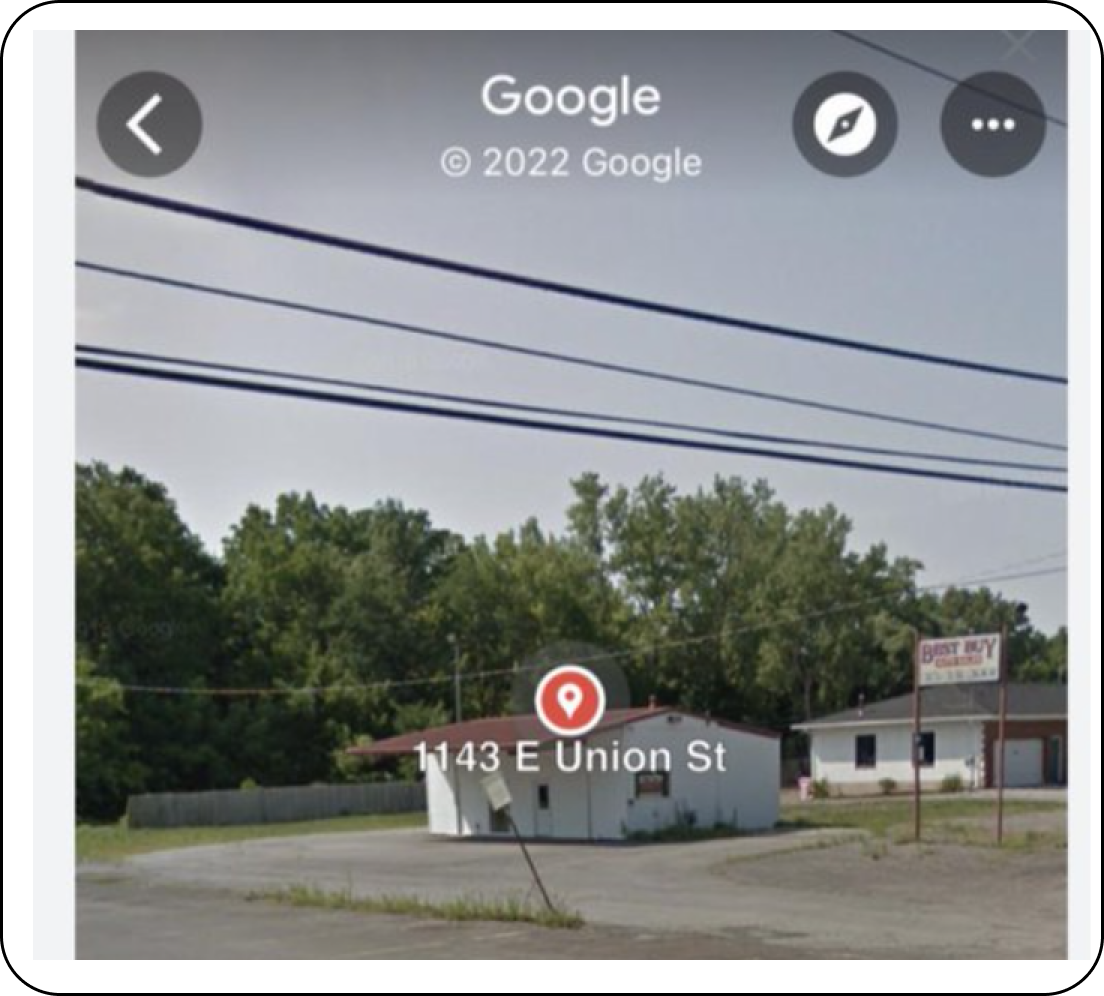 Talk about sketch... Looks like a place that could be featured on an episode of True Crime or Unsolved Mysteries. 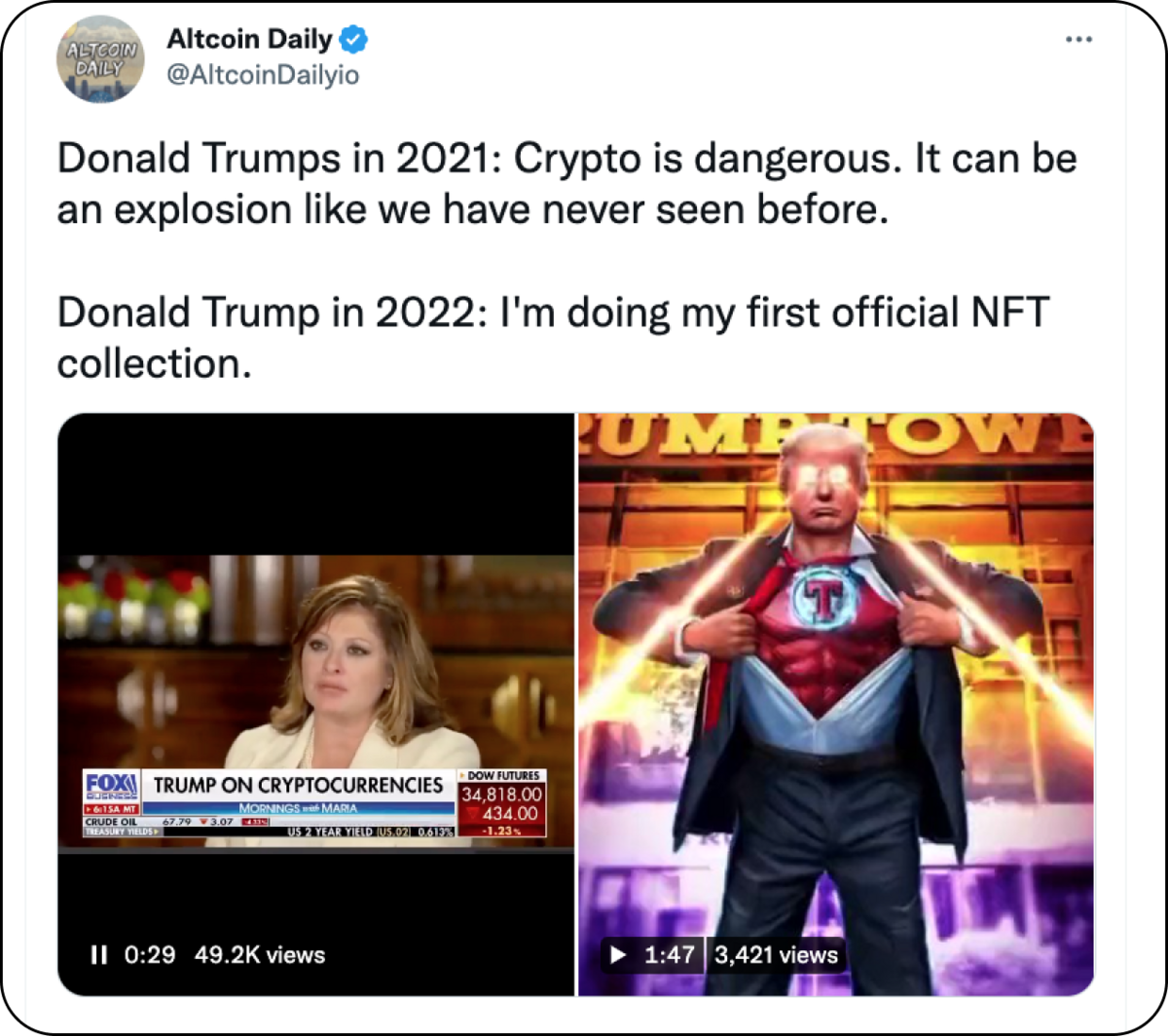 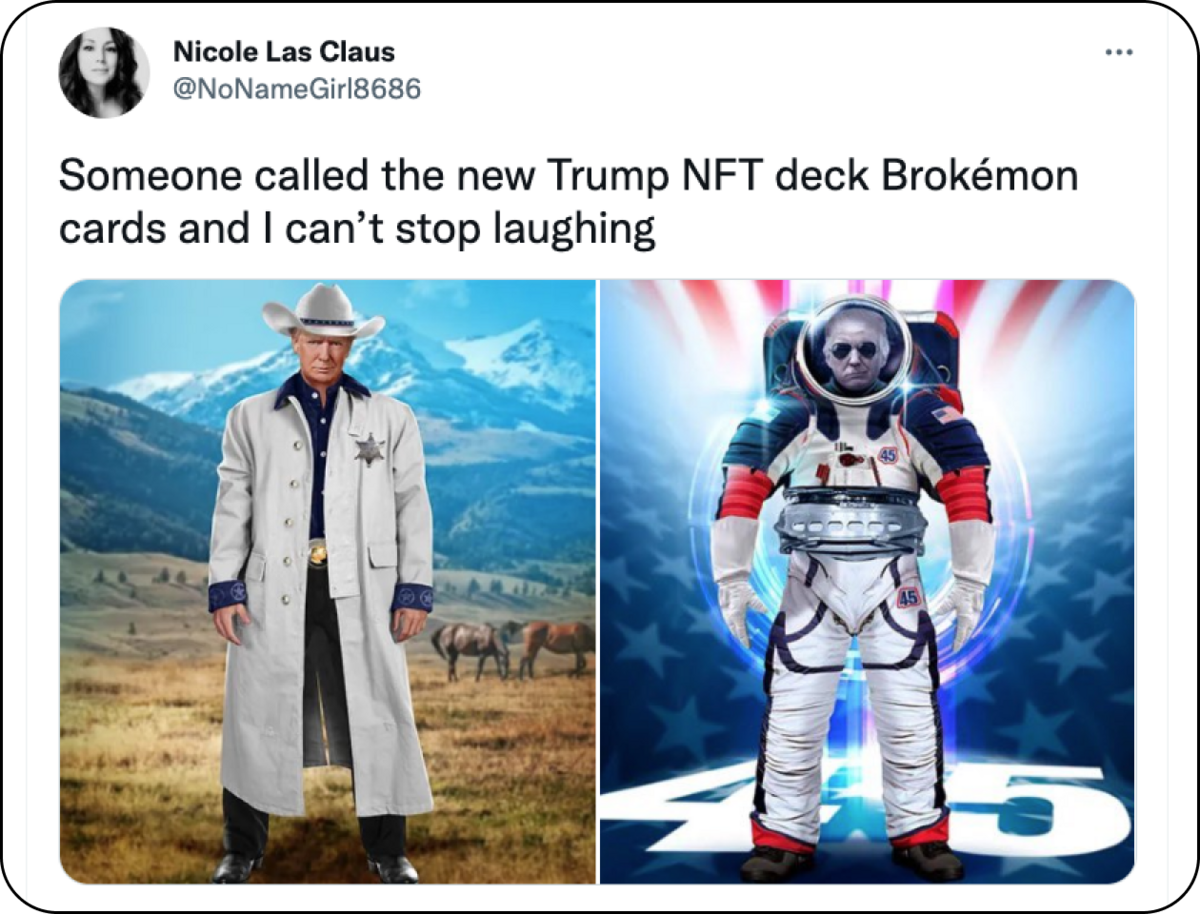 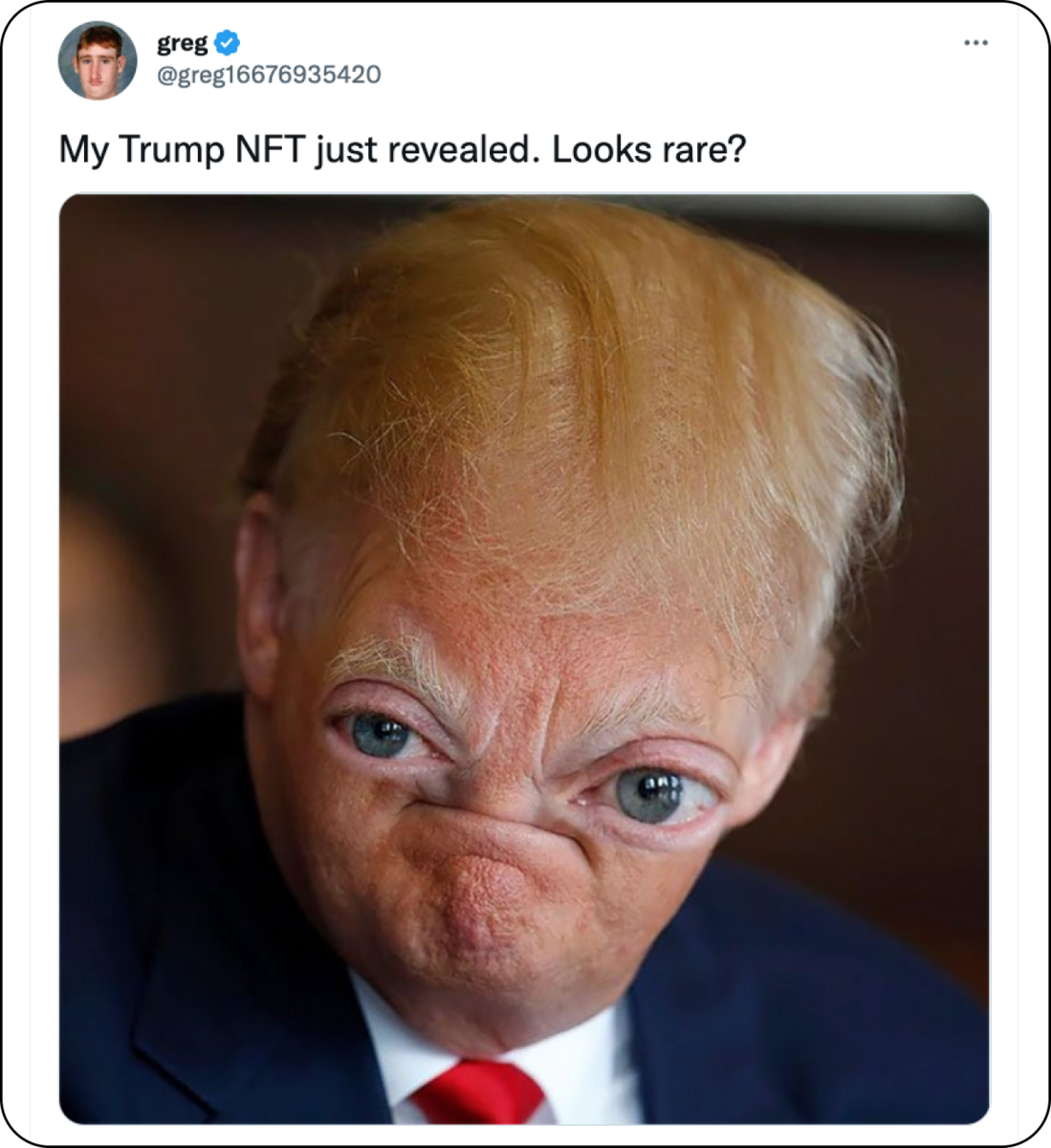 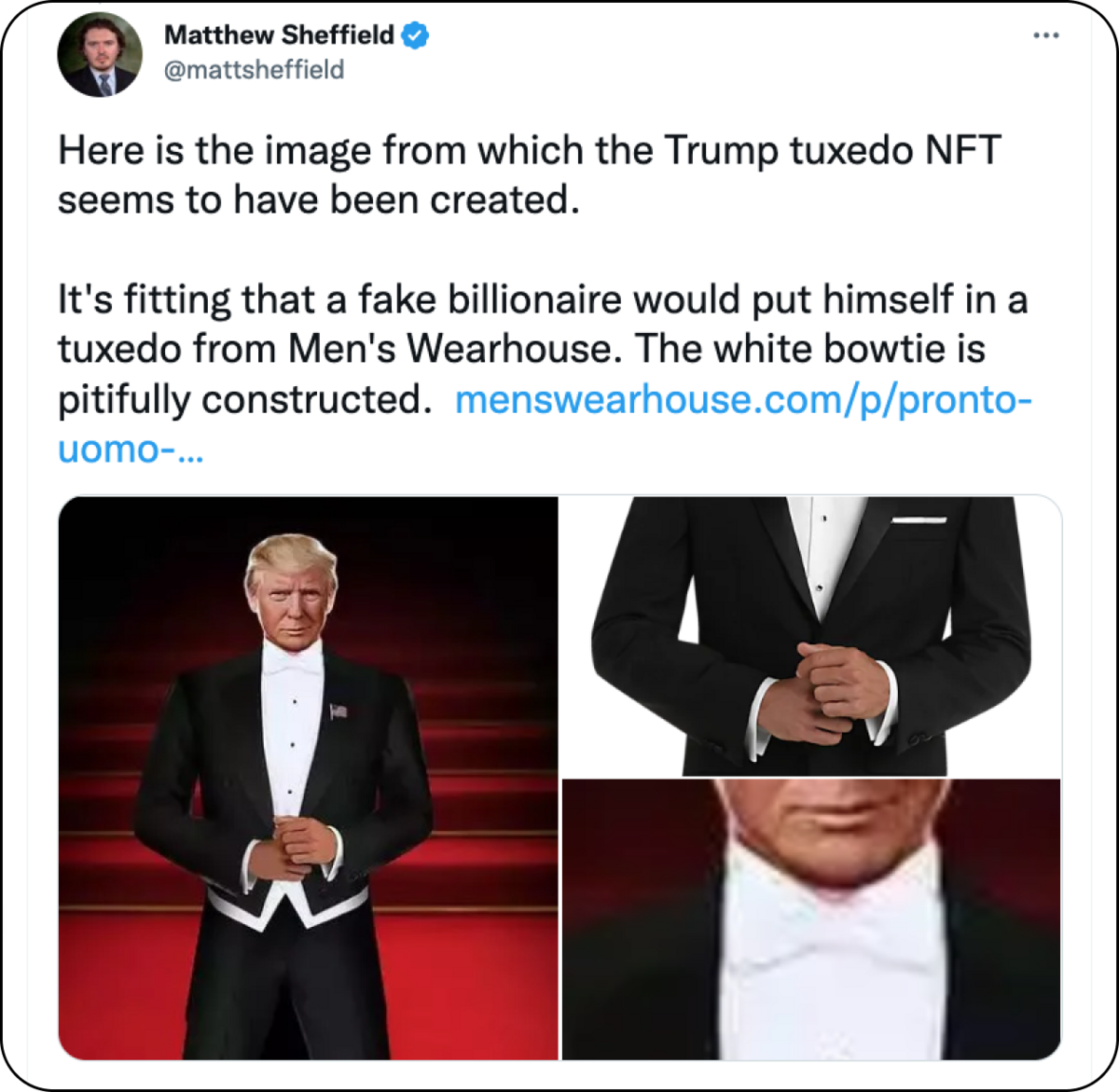 Donald did sell out his project in less than a day & made millions. Something many other celebrities can't say.

But the shadiness surrounding the art & where it came from put into question whether the project will survive in the long run.

Stay tuned to find out if the 45th President of the U.S. is also the 45th celeb to flop on an NFT project.

TODAY'S EDITION IS BROUGHT TO YOU BY HONEYLAND

2022 was supposed to be the year of play-to-earn games.

But there was too much focus on “earn” and not enough on “play.”

A new game is changing that.

It’s called Honeyland and it focuses on gameplay first and economic incentives second.

It has a full suite of in-game assets and a new approach to “play-to-earn” called “play-to-own." Here are the main game features:

It’s a mobile game built to play in short spurts like Candy Crush and Clash of Clans.

Right now the current floor price for Honeyland’s NFTs is 17 SOL, and their next collection mints Dec. 21 on Magic Eden for 1.5 SOL.

You can register for the mint here.

IS DCG IN TROUBLE?

While all of us were on the edge of our seats watching the World Cup Final.... (damn, Messi is good)

The Milk Man was on the edge of his seat watching something just as anxiety-inducing...

Why? A bunch of assets related to the crypto giant were being sold off like the dickens. 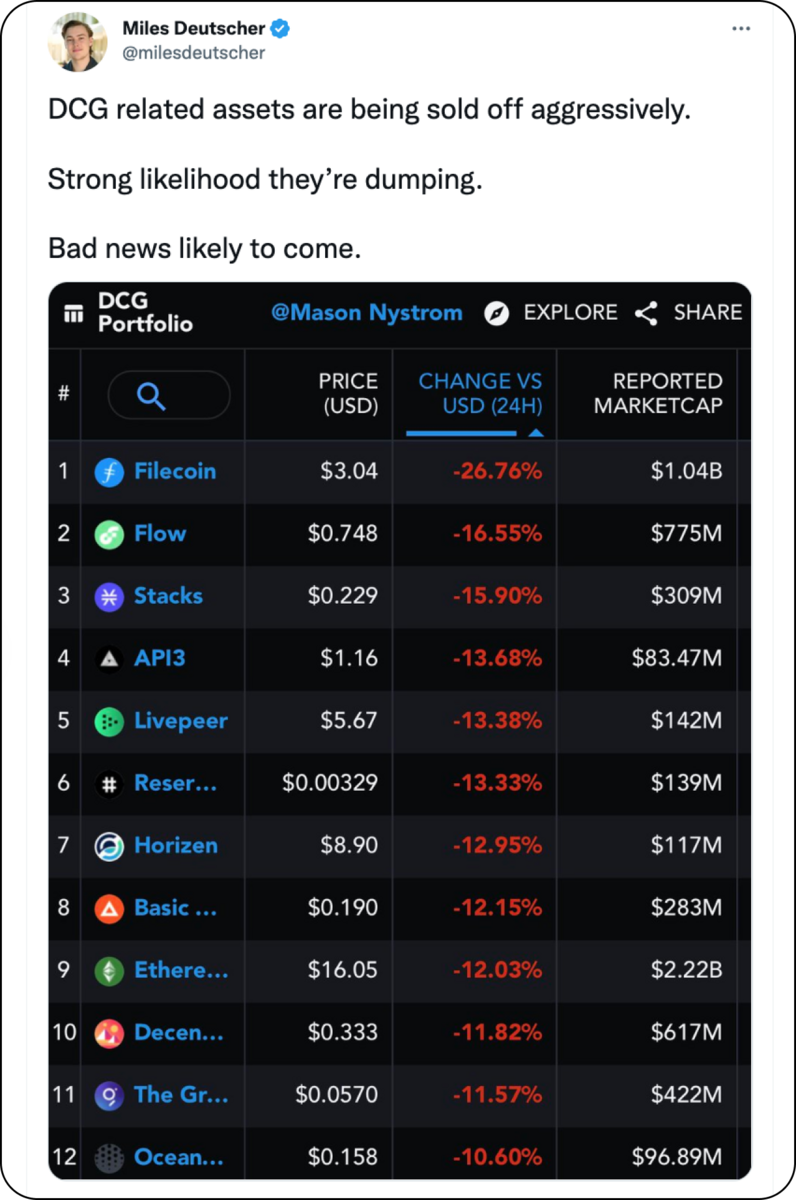 And it's not just DCG that's in trouble. It's a family affair.

You can call the DCG family the Kardashians of crypto right now. And man, is it hard to keep up...

So, we're gonna whip out the family tree to help explain what's going on.

Here's a 30-sec rundown of the drama:

I know I know, the DCG drama makes the Kardashians look like the Brady Bunch. 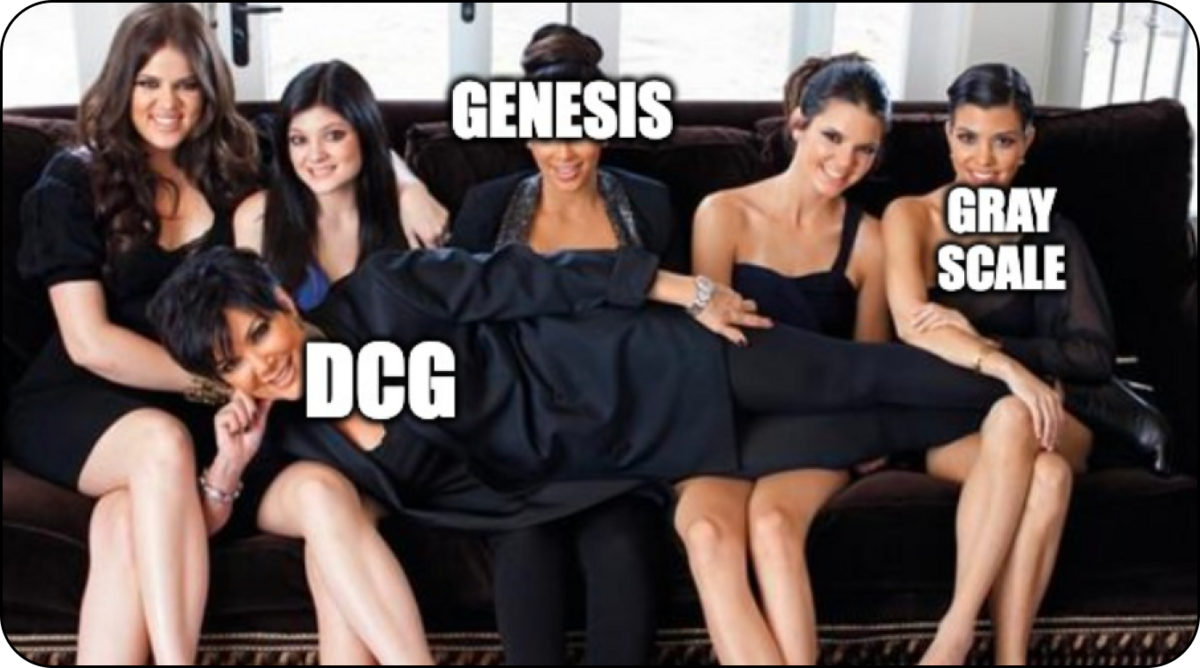 We'll be keeping a close eye on how it all plays out.

Binance.US is set to acquire Voyager Digital’s assets for $1b+.

OKX withdrawals got halted due to issues with their cloud service provider. OKX says funds are safe and that the problem has been fixed.

It’s reported that Samuel Bankman-Fried will not contest extradition back to the U.S. He is expected to appear before the court today.

Riot Games has filed to end its sponsorship with FTX due to “reputational harm and damage." 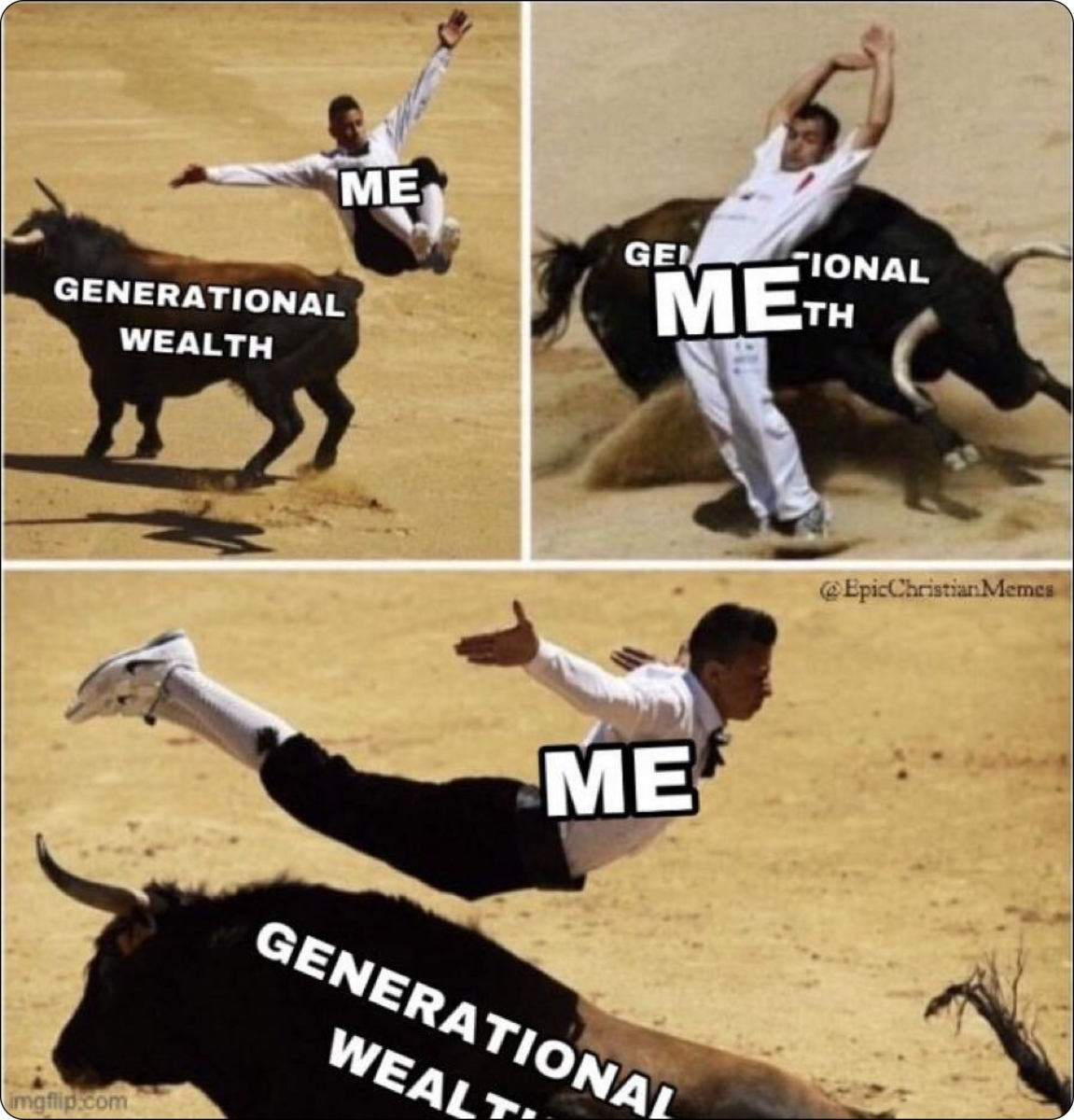 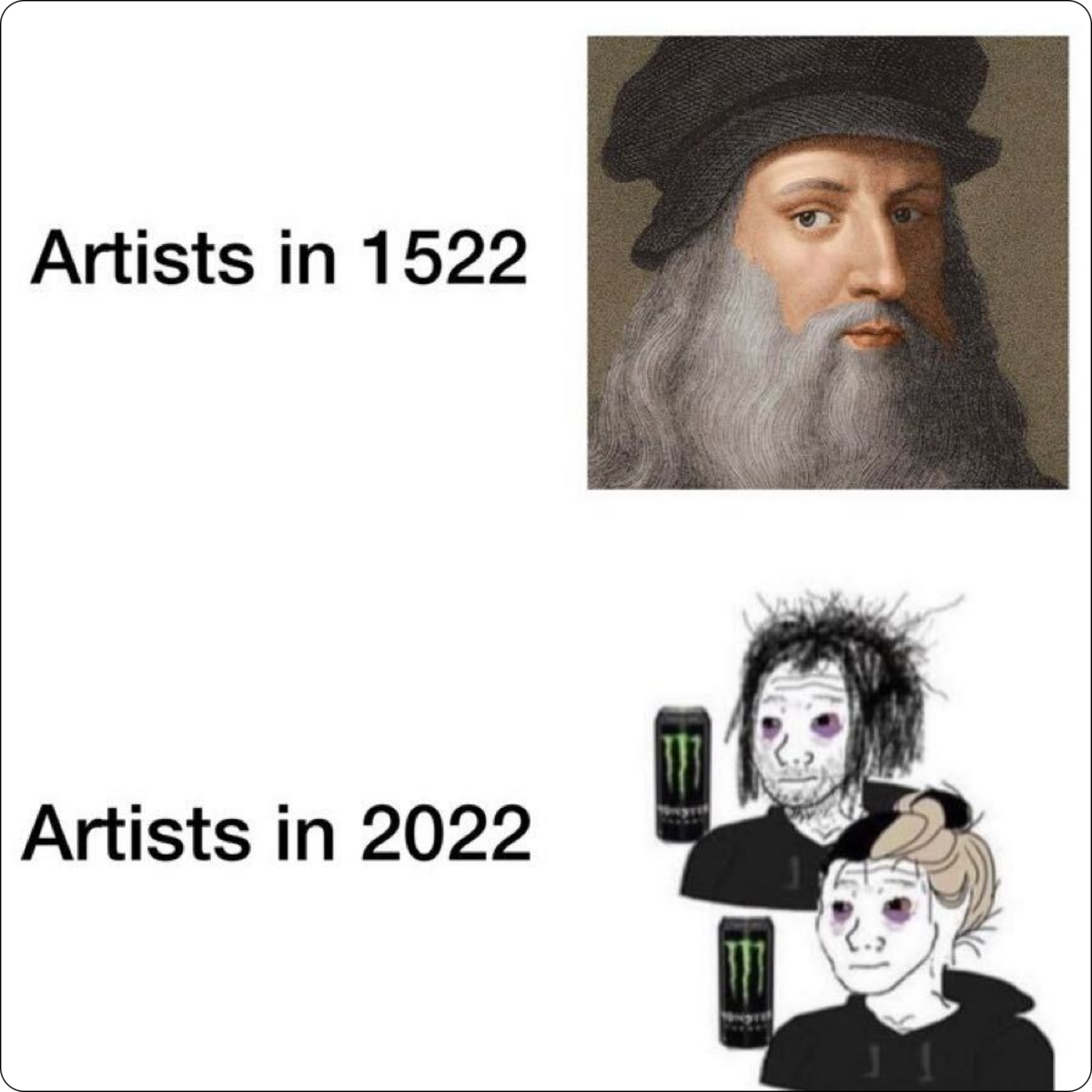 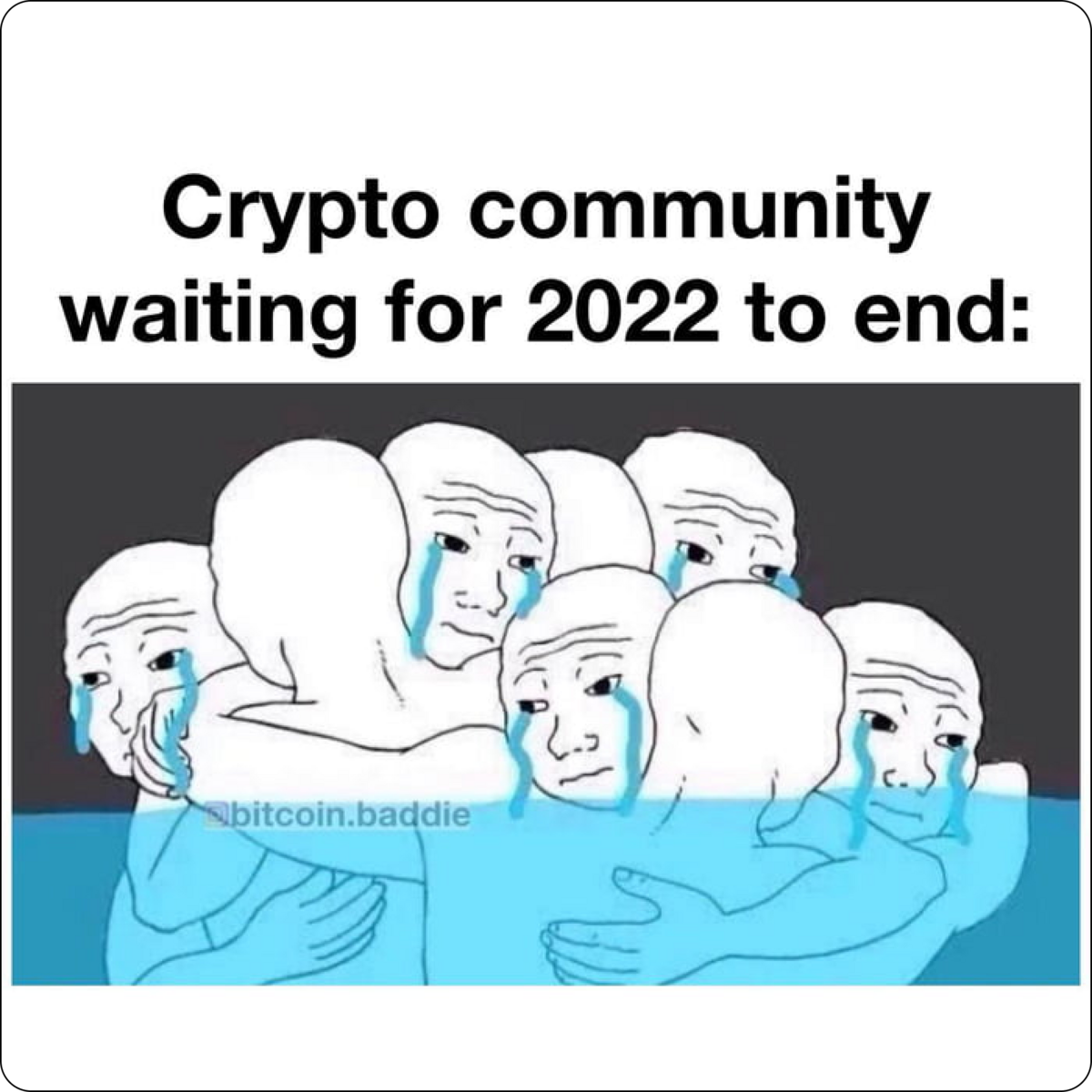 Compliance can be the difference between your crypto company becoming a unicorn or going bankrupt.

Chainalysis created the Public Key podcast to help you understand the latest updates in crypto compliance from the top thought leaders in the space.

There’s something new in crypto every single day— laws, blockchains, and applications. Public Key makes sure you stay up to date on all of it. Listen now!