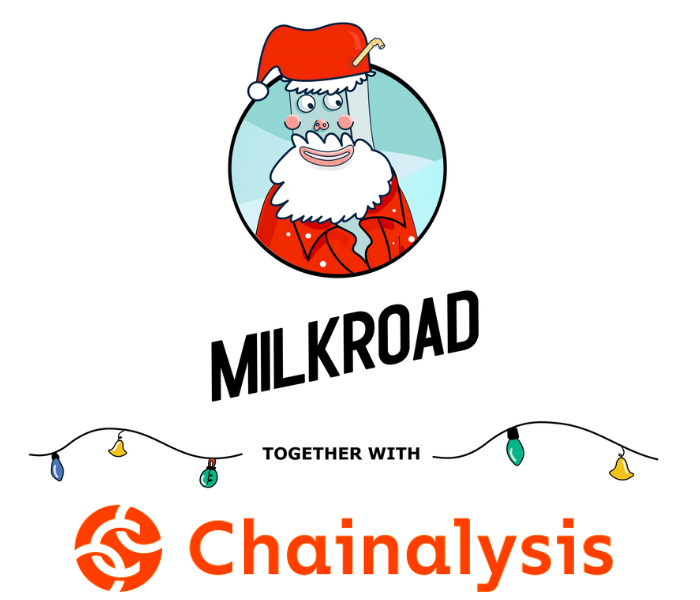 GM. This is the Milk Road. The daily newsletter that helps you feel safe in the wild, wild, west of crypto.

We’re like that car handle your mom grabs when you’re driving 5 mph over the speed limit. 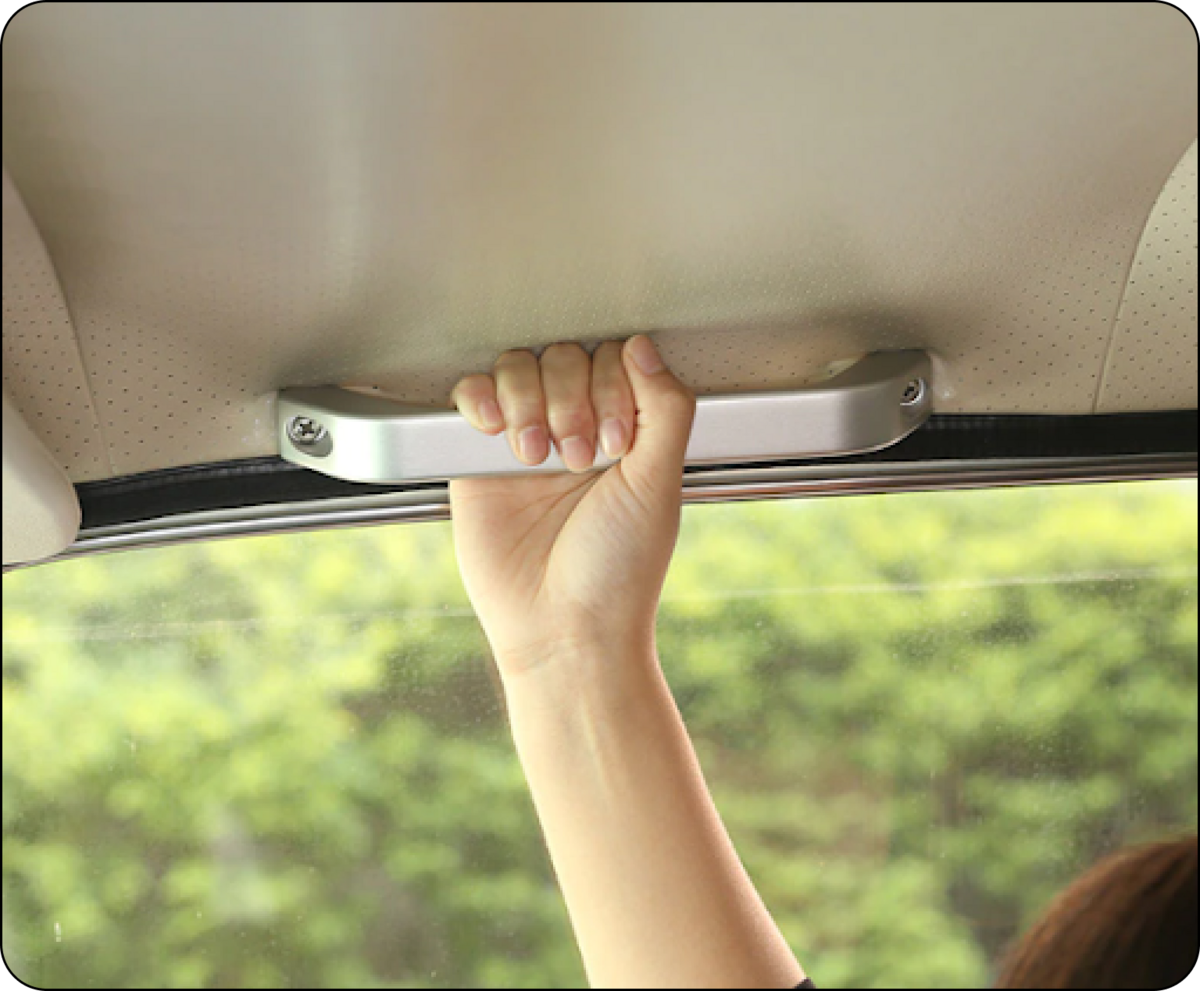 Happy Hump Day. Here’s what we got for you today: 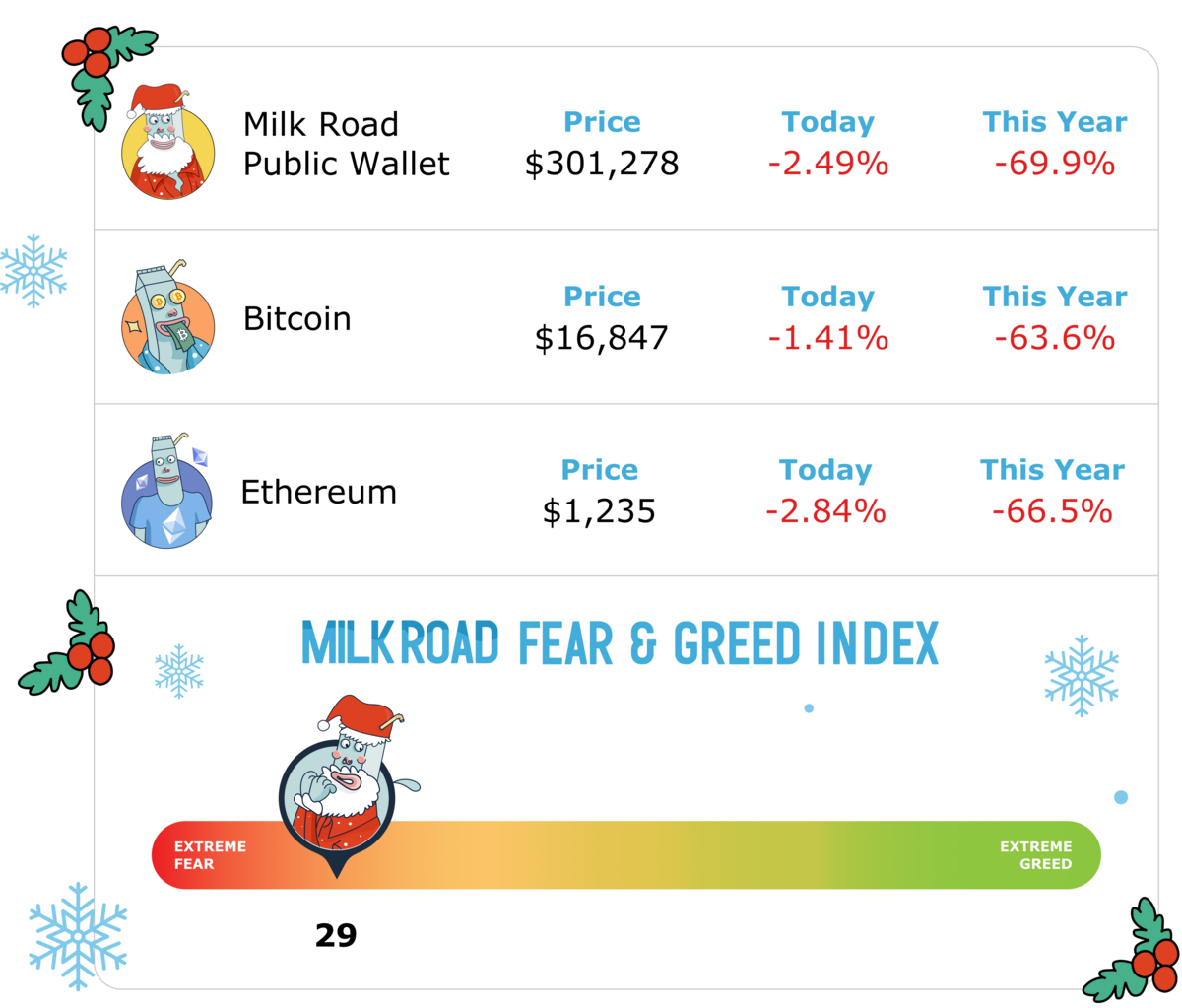 Alright, boys and girls. We have a special guest in the house.

Someone I’ve followed for over a decade, and one of the inspirations behind me becoming a writer… 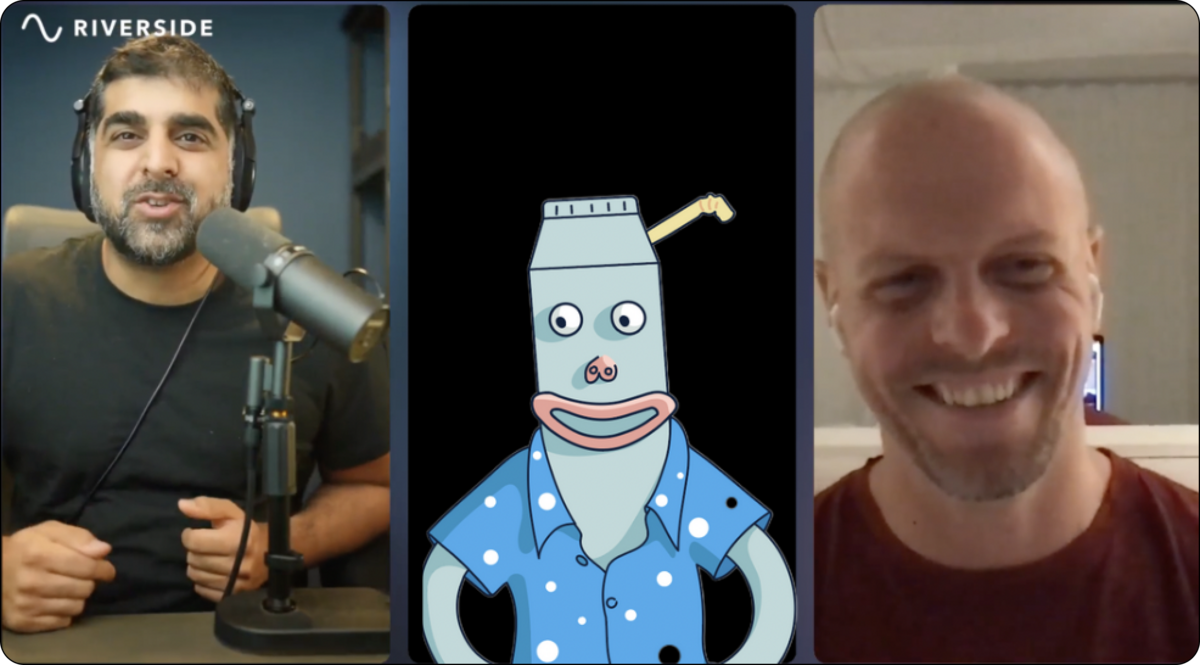 Tim: Thanks - good to be here. First - my lawyer will electrocute me if I don’t say this disclaimer: Nothing I say is financial or investment advice. Please speak with your qualified special advisor on all of these things.

Shaan: Alright so I have 7 big questions for you. Ready?

Shaan: #1 - When did you first hear about Bitcoin? What was your reaction?

Tim: Kevin Rose told me about it, back in 2012. I’m not going to lie. What got me interested was that Kevin was interested hah!

But in terms of the idea itself… the idea of digital scarcity, or a digital gold, that caught my attention. I was very, very deeply… interested in it.

So I bought a small amount. That’s how I learn, by getting some chips on the playing field.

Shaan: #2 - Now it’s 10 years later - what is the Tim Ferriss playbook for the current crypto bear market? Are you looking at prices everyday?

Tim: No - I do not look at the prices every day.

That's just masochistic. You might as well just get like a cat o’ nine tails and whip your back everyday.

I tend to invest over a let's call it 3-5 year period of time.

Personally, I'm holding pretty much everything that I own, period, full stop.

And that's not a recommendation for anyone else.

But I have made more mistakes selling things out of fear than doing anything else. I remember in 2008 selling Amazon. You know, the sky was falling and everyone was running around like Chicken Little, but I panicked and I sold.

I also invested in Facebook, pre IPO, Twitter pre IPO and as soon as the lockups were up, basically in both of those cases and the stocks temporarily took a dive.

I’m not that experienced in public markets, so I missed out on huge upside there.

This is also true with Shopify and the early days because I was the first advisor of Shopify when they had eight to ten employees.

So I have made most of my expensive, hideous, hideous mistakes by selling things out of fear or panic.

So the question that I have been asking myself (and smart friends) is “Are there any initial assumptions about crypto/bitcoin that you feel are now less compelling or you’ve changed your mind on?”

I haven’t done enough homework to invalidate the initial thesis that got me interested.

Shaan: What the heck is COCKPUNCH. Give us the 1-2 minute explanation?

Tim: So COCKPUNCH is, in its simplest form, a fantasy world.

And an experiment in what I'm calling emergence long fiction (ELF).

I have 10,000 plus words written, which I'm setting as sort of the lowest threshold for this label of emergent long fiction. You have to start with at least 10,000 words.

That’s like 1/5th of a standard novel. But it’s not just writing. I'm hoping to experiment with different media, different formats.

We have a podcast that just launched today. The 60 second teaser is pretty amazing. It’s like a fake movie trailer.

All the characters are roosters, but from 8 primary houses, and they compete in this thing called the Great Games. Whoever wins the games brings prestige and abundance to their house. 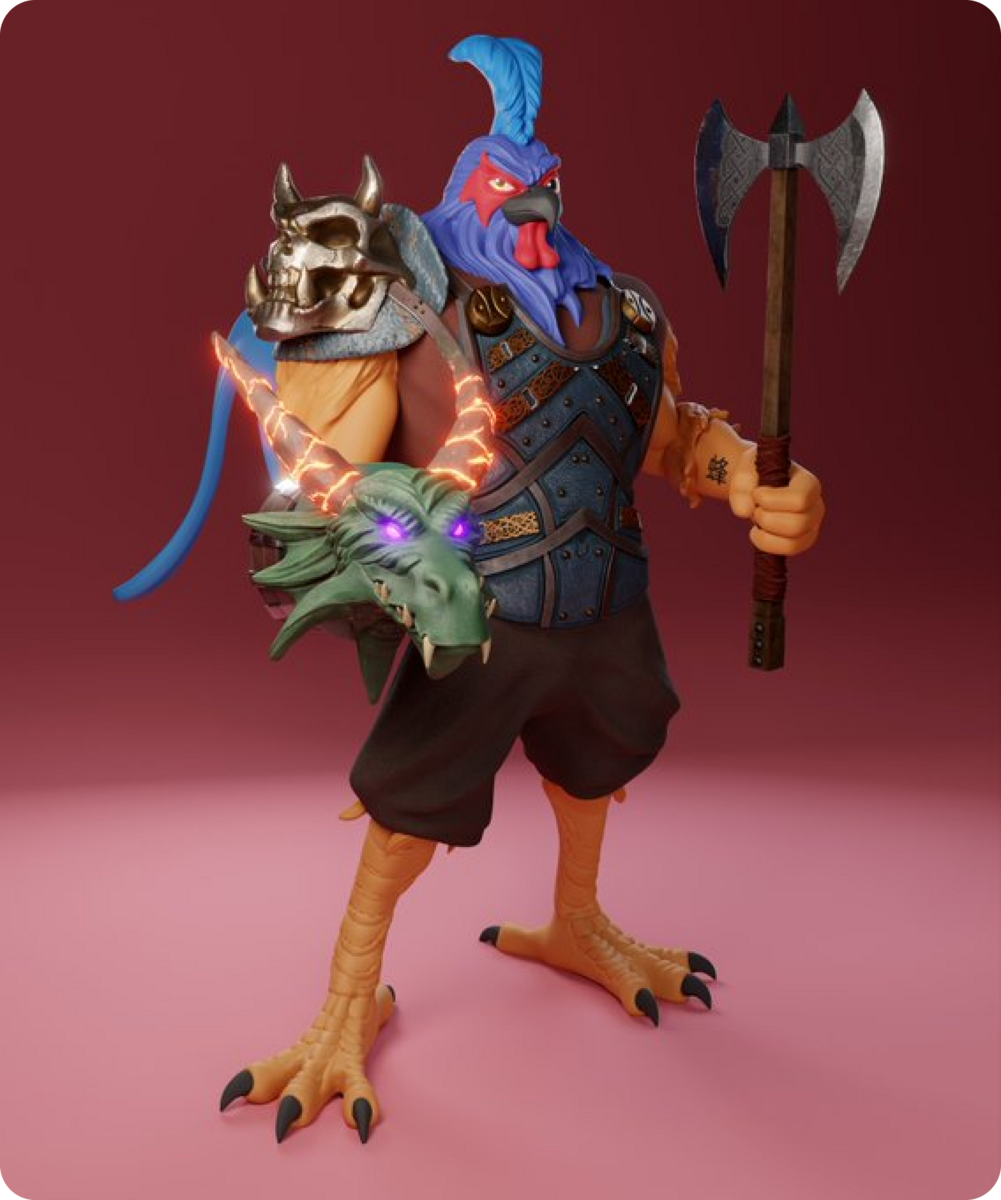 Shaan: So it's got like a Hunger Games meets Tolkien vibe.

Shaan: #4 - This is a crazy project. What do you think is the core risk - why might it fail?

Tim: I will say that I try to only take on projects that can succeed even if they fail.

That means I try to build relationships or skills or acquire knowledge along the way.

So I have really stacked the deck in my favor in both of those categories.

So even in the worst case scenario - I’ll still come out ahead.

But the core risk to the project is if I end up “managing” the project rather than “creating” things. Because if I get stuck managing, I’ll lose interest and not be doing what will add the most value to the project.

I’m not trying to please speculators or flippers. I know they're part of the ecosystem. That's fine. I understand that. But I want to focus on writing & art. Those are my superpowers. So if I'm not delegating properly and end up focusing on more of the managerial administrative stuff, then I think that's an existential risk to this, in part because I will lose interest.

It's like when people try to create This American Life, when they've never done a podcast before… and I'm like… really? I will take the over under on that. I bet you $1,000. They'll quit after three episodes, right?

The other risk I would say is that I kind of walk into the the tavern, right? It's like the bar in Star Wars. And either I like hanging out with the people in that bar or I don't.

And crypto has a very toxic minority of people. So if I'm feeling constantly badgered or bickered with by that group, then I might get tired of it.

So there's that risk, which is why, you know, I'm sure a lot of people say this on the show, but nothing I'm saying is financial advice. But I will give you one bit of advice from Uncle Tim, which is do not treat these NFTs as investments, they're not your 401k. They're not your daughter's college tuition. Like they're very odd and beautiful pieces of art, in my opinion, with a bunch of stories wrapped around them.

Shaan: #5 -  I got to say that's a really honest and like kind of an amazing answer. So 100% of the primary sale is going to charity - why should someone buy the NFT? What do they get? Do they get to meet you? Do they get cool art? What would be the reason to buy?

Tim: Let me start with what you don't get.

This is my Anti-Sales pitch.

There’s no Discord. There's no planned utility. No trips to basketball games. No world tour. Those are all outside of my core strengths.

What they get is I think a very, very beautiful & bizarre art.

I hope to impart entertainment.

I think the default these days for a lot of people is doom, scrolling, pessimism, maybe nihilism, apathy.

And this is meant to be somewhat of an irreverent counterbalance to that. So people can have some light and levity and hopefully humor in their lives. And there's, you know, there's a serious goal behind it, which is the funds going to Seikei Foundation, which works on complex PTSD, treatment resistant depression, really heavy stuff.

The way I hope people think of this is like going to Disneyland or a Broadway show. Have you ever gone out for a night for entertainment and spent a few hundred bucks over one or two evenings? This will cost about the same as that. (0.3 ETH)

Shaan: #6 - I like that you’re doing something weird. If you were just writing another business book. That’s cool…but this is more fun to see you go outside your comfort zone.

Tim: Yeah, me too, man. It's more fun for me. Honestly, if I have more energy, I'm more likely to do interesting things.

I know that sounds so obvious - but it’s true.

Shaan: #7 -  All right, let's change gears a little bit. You’ve done like…600+ interviews on your podcast. You’re one of the best interviewers in the world...Let's say you had a chance to interview Sam Bankman-Fried for a couple of hours. How would you approach that interview?

Tim: This is a challenging assignment because I don't know whether he is going to tell the truth or lie.

(side note: this is why I almost never have a politician on the show)

…But if I were to try to take a stab at it, I can tell you a few approaches I might take.

First - I’d talk to his old friends or coworkers and ask them what question they’d want me to ask on their behalf.

Then I could borrow their names and that might warm him up.

The other thing is - he’s doing a lot of media. Which is strange. So I’d ask him “what do your lawyers think of you doing this interview?” it might make him laugh and warm up.

I wonder why he’s doing so much media. I mean, is it fleeting and temporary insanity? I find it hard to believe there is no strategy unless he is so fatigued that he is fatigued or resigned to a very, very severe sentence that he sees no additional downside.

Other questions that may have been answered already, but why is it important that the bankruptcy proceedings take place in Bahamas? I think that's an interesting question. Would he give me a straight answer? I don't know.

I’d want to know his fundamental beliefs. Because he’s not stupid. He has good hardware upstairs. That’s why I want to know what his beliefs are, what led him to take these actions.

Do we assume this is a bad person or like he is criminally minded and was predisposed and has been for a long time to engage in criminal behavior?

Or do we as a thought exercise ask what if he actually strives to be an ethical person but ended up making these decisions?

I would also just ask him straight up “how much of what you’re telling me should I assume is honest? What percent?”

Shaan: Thanks for coming on the Milk Road - how can people follow you and COCKPUNCH?

Tim: Sure - you can find it all at cockpunch.com and on Twitter.

All the primary sales are going to the Saisei Foundation 501(c)(3). It's nonprofit and it funds a lot of cutting edge research and psychedelic science, mental health therapeutics and is doing very, very important research, hoping to develop unorthodox treatments for what people might consider intractable or untreatable conditions like complex PTSD, treatment resistant depression, eating disorders, chronic anxiety, etc.

Ledger is the king of hardware wallets. They’ve already: 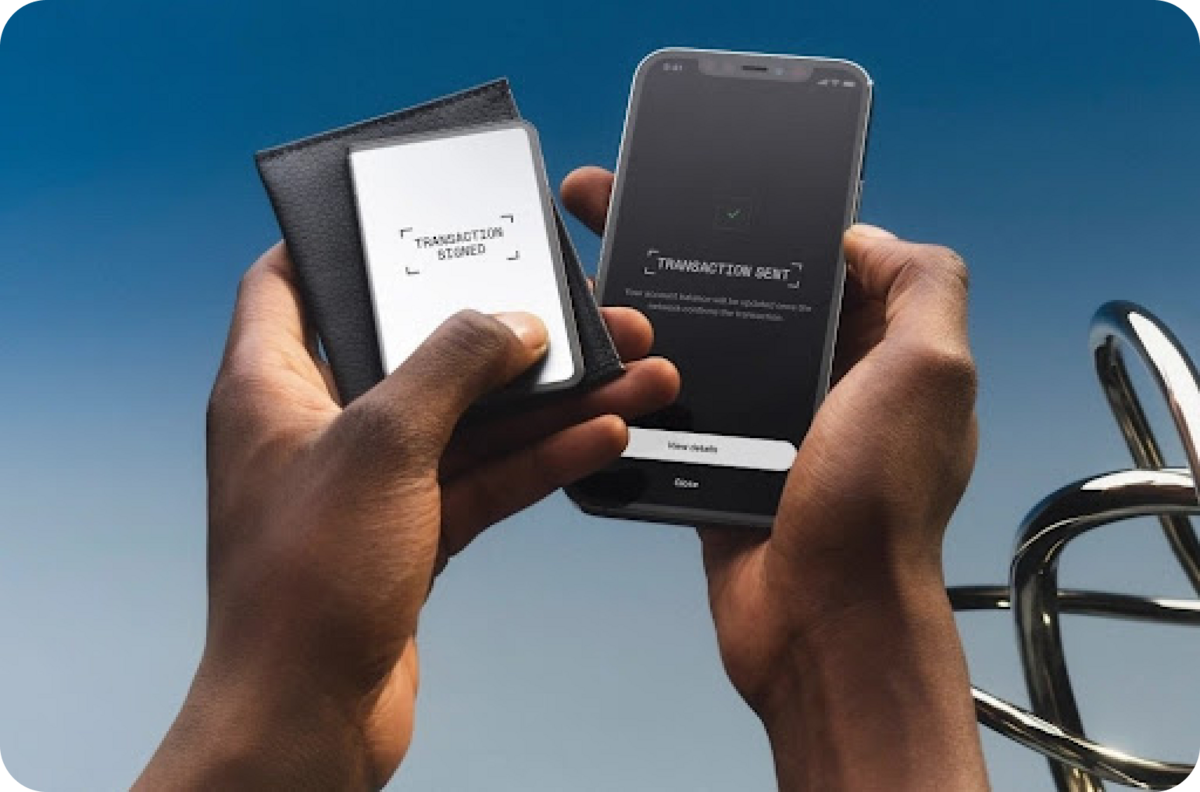 Here’s everything you need to know:

But I'll always be grateful for the OG Ledger (and the finger strength acquired from using it.) 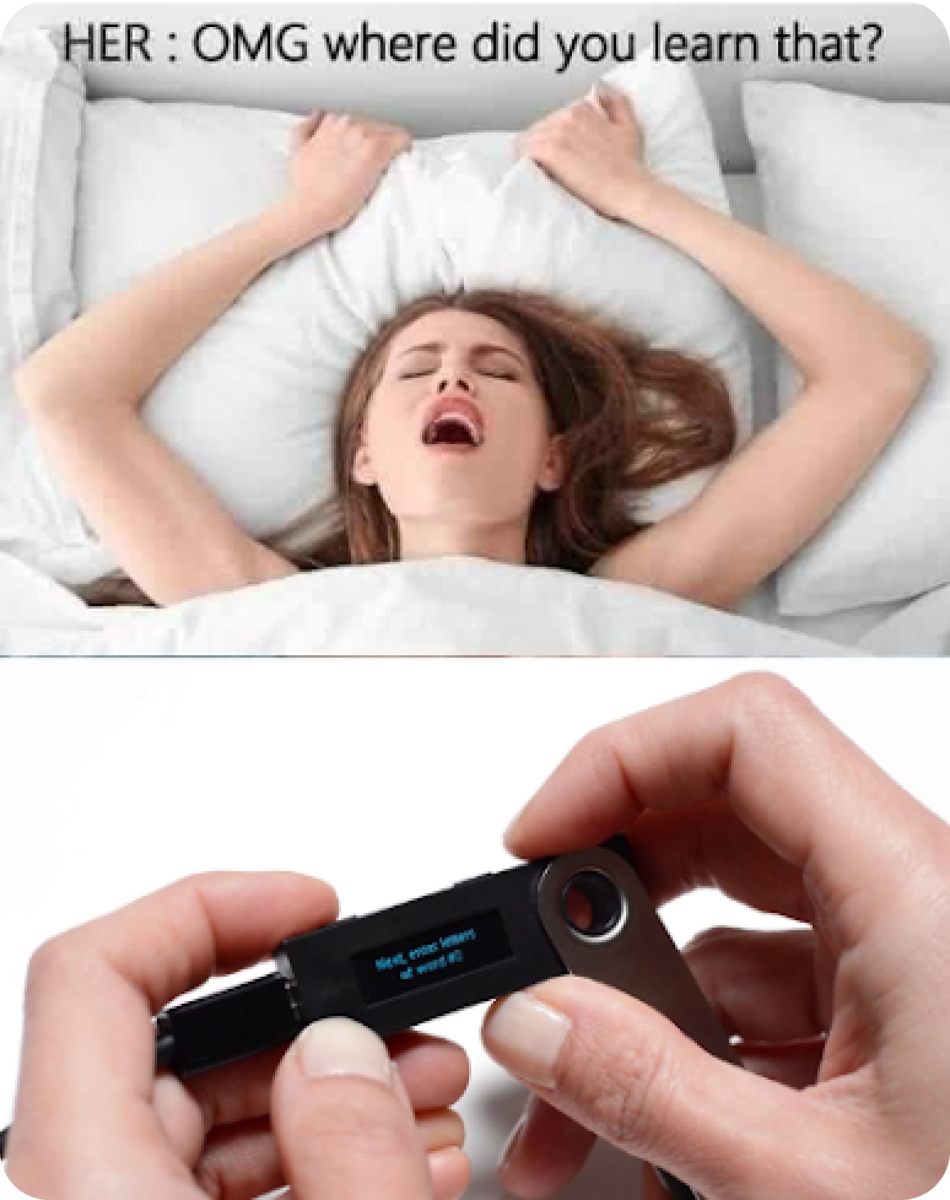 TODAY'S EDITION IS BROUGHT TO YOU BY CHAINALYSIS

It’s not just you. We’ve noticed that the Milk Road Fear & Greed Index has been in the red for months now too. The last few weeks haven’t helped inspire confidence.

No one likes living in fear.

That’s why Chainalysis is building the best data set in cryptocurrency. Web3 companies, banks, and governments use Chainalysis to:

We still believe the future of the global economy will be built on blockchains. Learn more about the work ahead here. 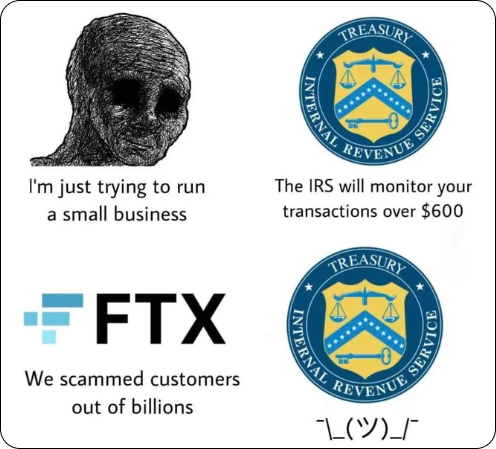 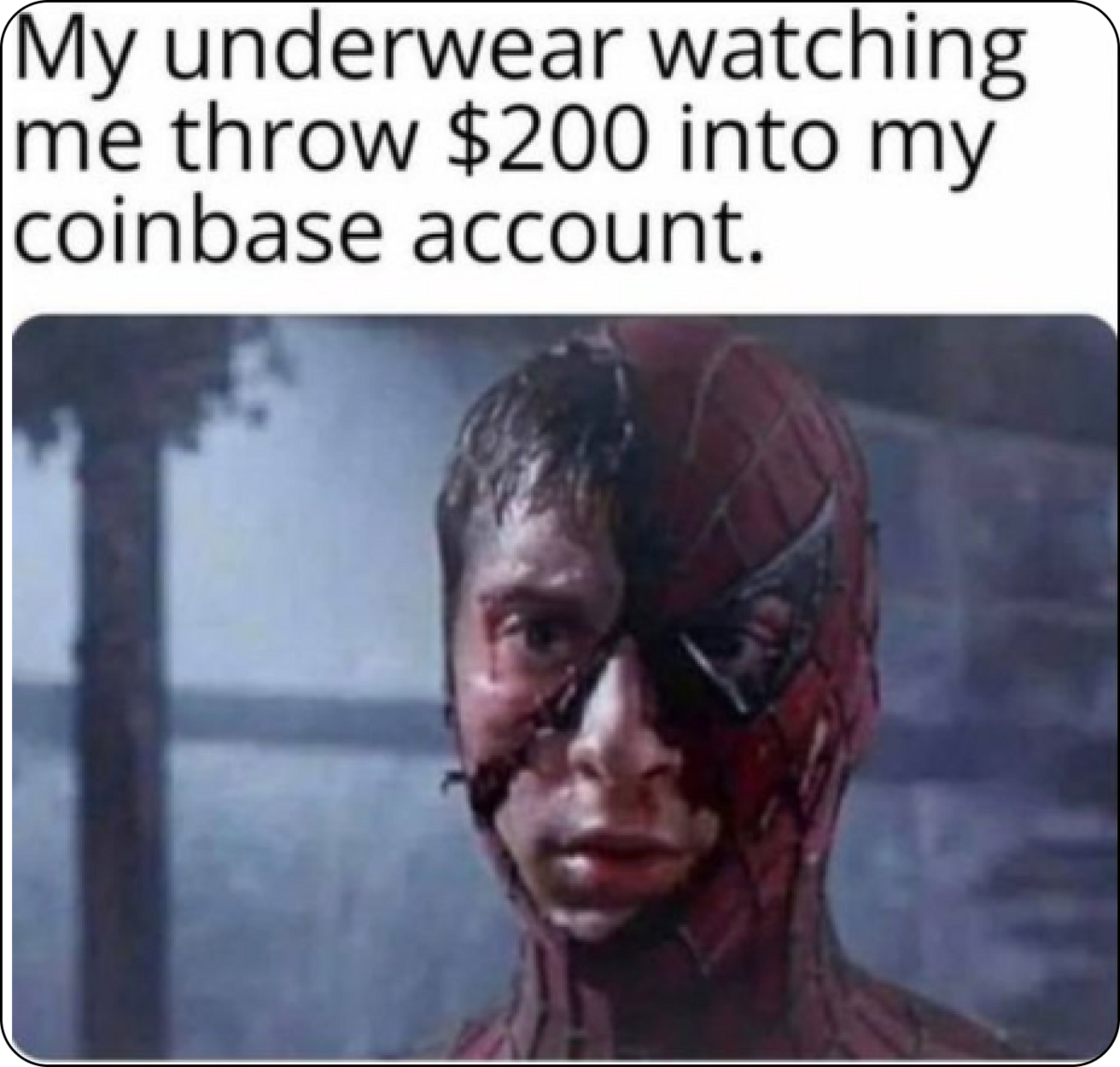 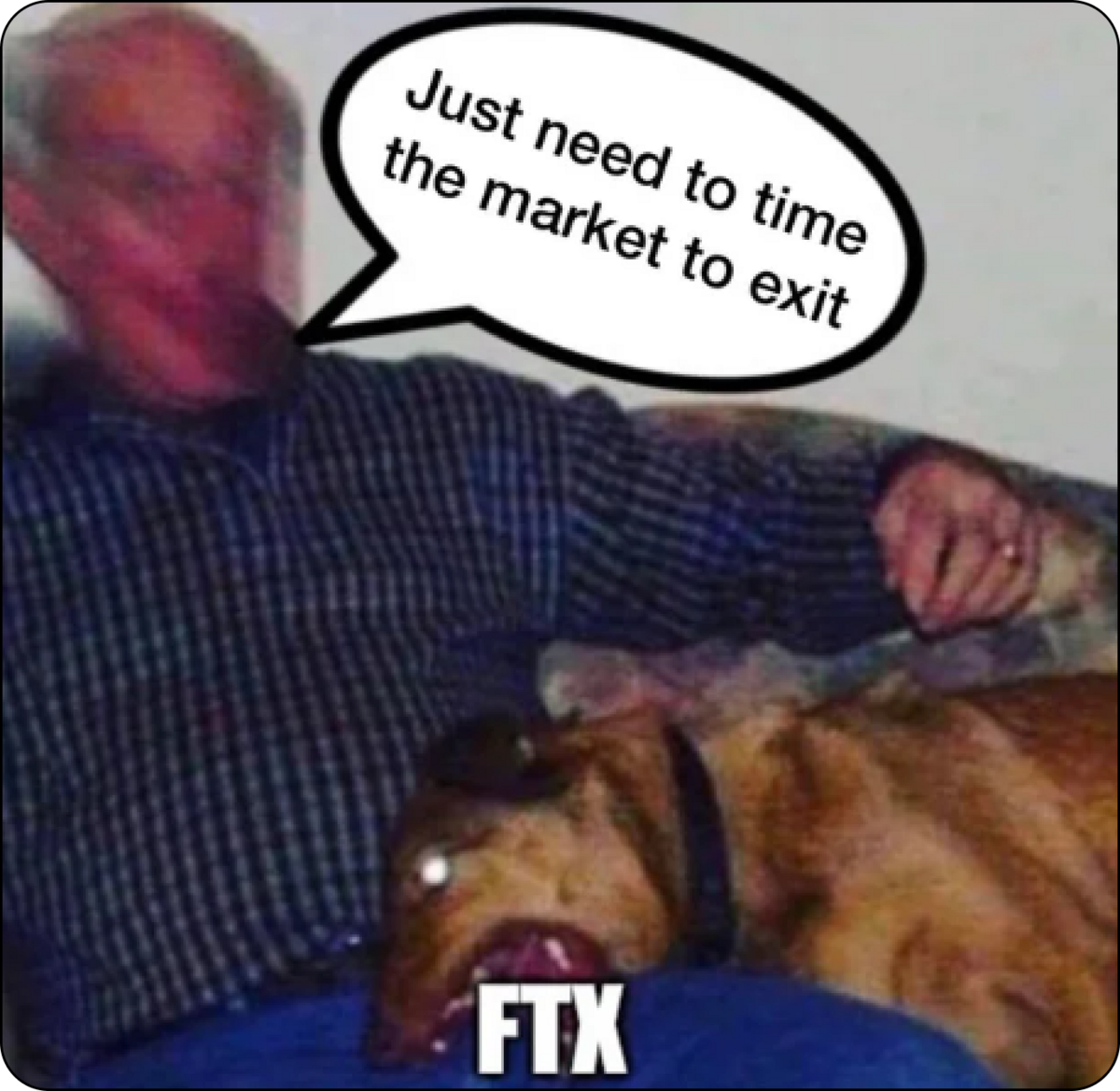 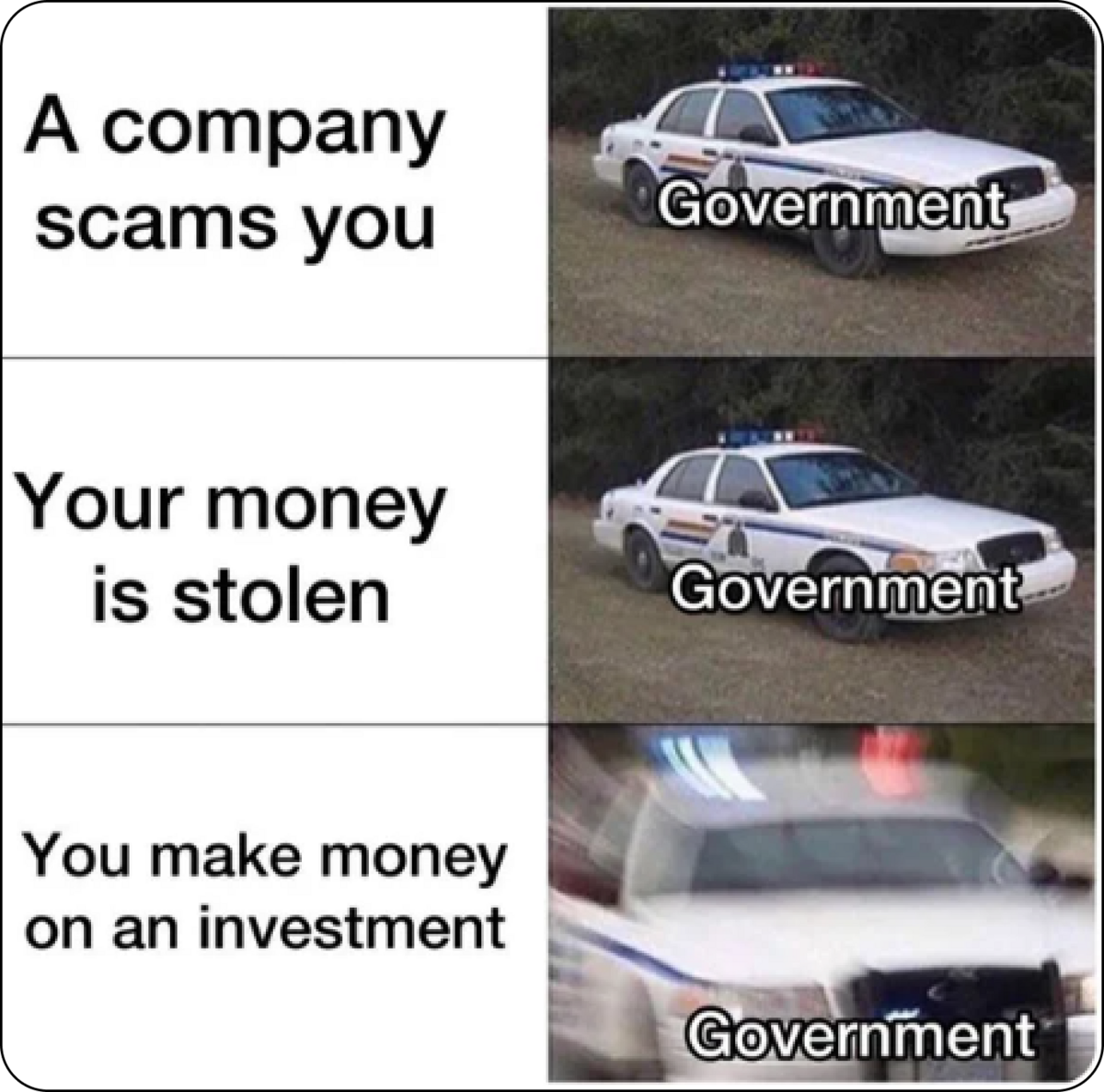