The Ethereum Merge was considered by many the biggest upgrade in the history of crypto. The upgrade saw the merging of the Ethereum mainnet execution layer and the Beacon Chain’s consensus layer and eventually happened on September 15, after nearly six years in the making.

The Merge essentially changed the way Ethereum operates. It retired Ethereum's proof-of-work (PoW) consensus mechanism, and with it undercut the need for miners. Instead, now Ethereum uses validators and a proof-of-stake (PoS) model to verify transactions and secure the network. Ethereum will look almost the same as it did before, and users will be able to stake Ethereum or complete other transactions as normal.

The upgrade was deemed important due to its massive impact on the Ethereum network and even the world. According to estimates by the Ethereum Foundation, Ethereum will consume 99.9% or so less energy after the upgrade. It would also make the network significantly more efficient, secure, and scalable.

Nevertheless, Merge's impact on other crypto assets has also been significant. Here are some winners and losers of the Ethereum Merge.

Winner: Vitalik Buterin and Other Devs

Ethereum co-founder Vitalik Buterin along with the members of the Ethereum Foundation, a non-profit organization dedicated to supporting Ethereum, are among the major winners of the Ethereum Merge as they have invested significant time and effort into the upgrade.

The developers worked on the upgrade for around six years, working non-stop to meet challenging deadlines. Not to mention that they also had to deal with harsh criticism and intense pushback, particularly from the ETH mining community.

Lido Finance is the largest provider of staking services for Ethereum, having deposited around a third of staked ETH (stETH) into the Ethereum 2.0 smart contract. More specifically, the protocol has staked over 4.38 million ETH, worth over $6 billion at current rates, and offers a 5.1% APY.

The way Lido works is it allows users to take part in ETH staking even if they don't have the required amount of tokens. For instance, to become a validator in Ethereum, users need to stake 32 ETH. However, Lido allows those who can't afford this to pool their assets and stake collaboratively.

When users deposit their token into Lido, they receive a tokenized version of their staked assets which is redeemable at a 1:1 ratio. They not only earn staking rewards proportional to their staked amount but can also earn an additional yield on their tokenized assets.

Lido's native token is LDO. It is an ERC-20 token and is rewarded to the users of the protocol. LDO has a total supply of 1 billion and also acts as the governance token of the Lido DAO, allowing holders to vote on proposals and partake in the future direction of the project.

Due to its huge influence on Ethereum following the Merge, LDO has been one of the big winners of the upgrade. The token was constantly rallying in the weeks leading to the big event and even suffered minimal losses in the bloody week of the Merge.

It allows users to partake in ETH staking with as little as 0.01 ETH, while also maintaining custody of their funds. Rocket Pool gives users the freedom to stake towards any node operator of their choice.

Similar to Lido, Rocket Pool gives users a tokenized version of their staked assets, called rETH. The rETH token represents staked ETH on the project and is redeemable at a 1:1 ratio. Moreover, holders can use their rETH tokens to interact with other DeFi projects and earn additional rewards on top of their staking rewards.

One of the immediate impacts of the Merge was that it removed the need for miners. With big bucks invested in their mining rigs, Ethereum miners could not simply quit. Instead, they chose to flip to an alternative branch of Ethereum, namely Ethereum Classic (ETC).

Similar to Ethereum, Ethereum Classic is a decentralized, open-source blockchain. It was created by a fork of the original Ethereum blockchain back in 2015 after the hack of a DAO that resulted in the loss of around $150 million in user funds. 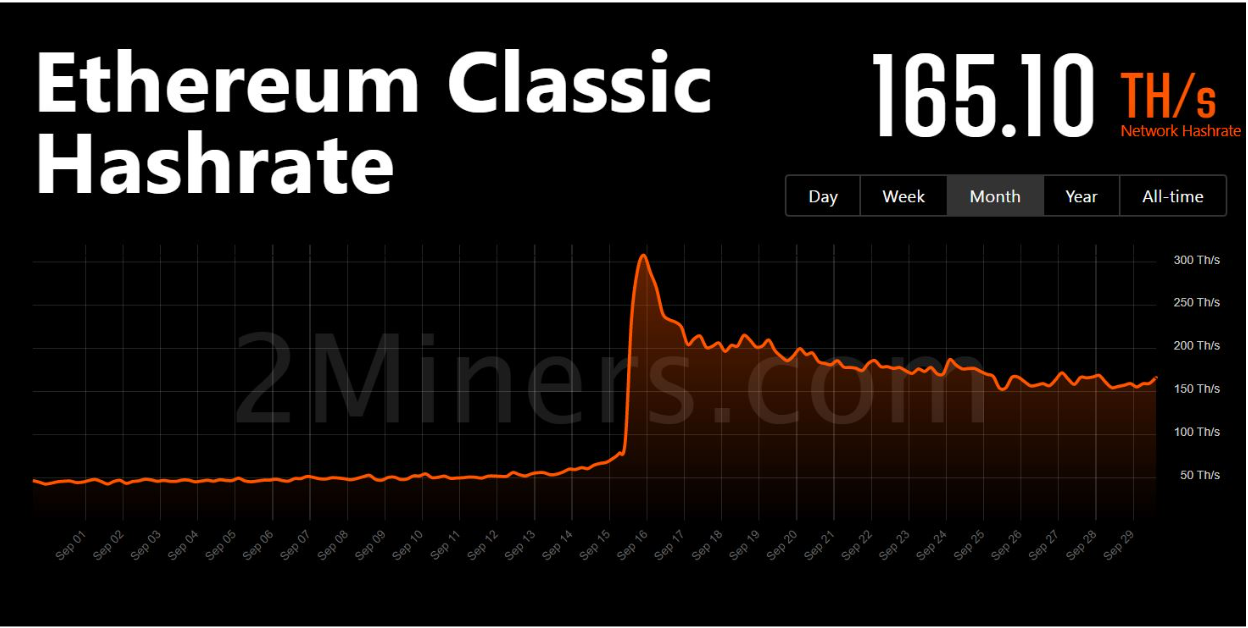 A higher hashrate means more computing power is dedicated to a network, which makes it more secure. Historically, a higher hashrate is accompanied by a surge in prices for PoW coins, which was the case with ETC.

As the Ethereum Classic hashrate increased, so did the price of its native token. Notably, ETC outperformed ETH by a wide margin in the weeks leading to the big event. The coin registered a local high of around $40 in early September but has since dropped to around $27.

As per data by Digi Economist, the total energy consumption of the Ethereum network stood at 83.4 terawatt-hour (TWh) per year just before the Merge. At its peak in late May, that figure was over 90 TWh per year, comparable to that of the Netherlands.

However, following the update, the Ethereum network's energy consumption has dropped by more than 99% to 0.01 TWh per year, comparable to the small British city of Gibraltar.

Without any doubt, the biggest loser of the Ethereum Merge was the miners. In March this year, miners raked in a whopping $1.29 billion in revenue. However, this all ended with the Merge. Not to mention that millions of dollars worth of mining machines became useless.

Some miners flipped to available alternatives like Ethereum Classic and Ravencoin, but these coins would not be profitable like Ethereum. There was also an attempt to fork Ethereum and maintain a PoW ETH, but that also faced numerous hurdles.

EthereumPoW (ETHW), a hard fork of Ethereum that has the support of some major proof-of-work (PoW) miners, can be considered another loser of the Merge. While the token had the perfect opportunity to make a splashy debut during the Merge, a flurry of technical issues plagued its launch.

The team behind the coin launched the mainnet on September 16, one day after the Merge. Subsequently, users took to Twitter to complain about access issues. One major issue was with ETHW's Chain ID of 10001, which is the same Chain ID used by a SmartBCH testnet.

The blockchain's native token ETHW has also taken a hit amid the rocky start. The coin, which was trading over the $51 mark on September 15, has since dropped to around $10. The coin is down by more than 65% over the last 14 days and by around 79% over the past month.

Moreover, Ethereum now consumes 99.9% or so less energy. That is because the network doesn't require miners to verify transactions anymore. Instead, it now uses validators.

All of these improvements could essentially put so-called "Ethereum Killers," which came to prominence with promises to tackle Ethereum's shortcomings of scalability and inefficiency, out of business. These coins might include Cardano, Polkadot, Solana, Avalanche, and more.

Despite all the hype and chatter around the Merge, the upgrade didn't impact the price of ETH significantly. In fact, shortly after the upgrade, Ethereum saw a slight sell off and ended the day in the red.