X2Y2 has recently become a major player in the NFT sector. From having strong security features to championing complete decentralization, the platform's efforts toward being a dominant NFT marketplace can't go unnoticed. We are particularly attracted to the site because of its low fee structure and transparency.

X2Y2 joined the NFT sector aggressively, luring clients from already established players. Today, it controls a significant portion of the market and is not relenting. The major reason X2Y2 grew so fast is that it was one of the first marketplaces to eliminate compulsory royalty fees, a controversial practice that makes NFT purchases cheaper for consumers. Here is a detailed review of the platform, covering the most pertinent issues such as how it works, fees, key features, and how to get started.

What is the X2Y2 NFT Marketplace?

X2Y2 marketplace bills itself as a democratic Web3 platform aiming to de-monopolize NFTs. It's dubbed "the marketplace by the people, for the people". For a long time, the sector has been dominated by OpenSea, which controlled about 90% of transaction volumes.

The lack of substantial competition gave OpenSea the power to retain user assets and charge high fees. It also introduced private investors from Silicon Valley. X2Y2 isn't supported by venture capital financing but by token sales open to the public.

It is designed to be user-friendly and intuitive for both traders and developers. High staking rewards and cutting-edge technology, such as NFT rarity ranking, give it leverage over competitors. Other notable functions include:

The name X2Y2 is derived from Pythagoras' theorem equation of a circle, x2 + y2 = r2, and depicts the team's goal to create an efficient NFT marketplace. Some of the more famous NFT names like Bored Ape Yacht Club, Crypto Chicks, and Azuki can be found on this market.

Keep in mind, however, that it only supports Ethereum mainnet collectibles. It displaced alternative NFT exchanges like LooksRare and OpenDAO to become the most significant competitor of OpenSea in just about eight months.

Data from Dune Analytics shows that X2Y2 is one of the top three NFT marketplaces globally alongside OpenSea and LooksRare, an impressive feat given that X2Y2 launched in 2022. 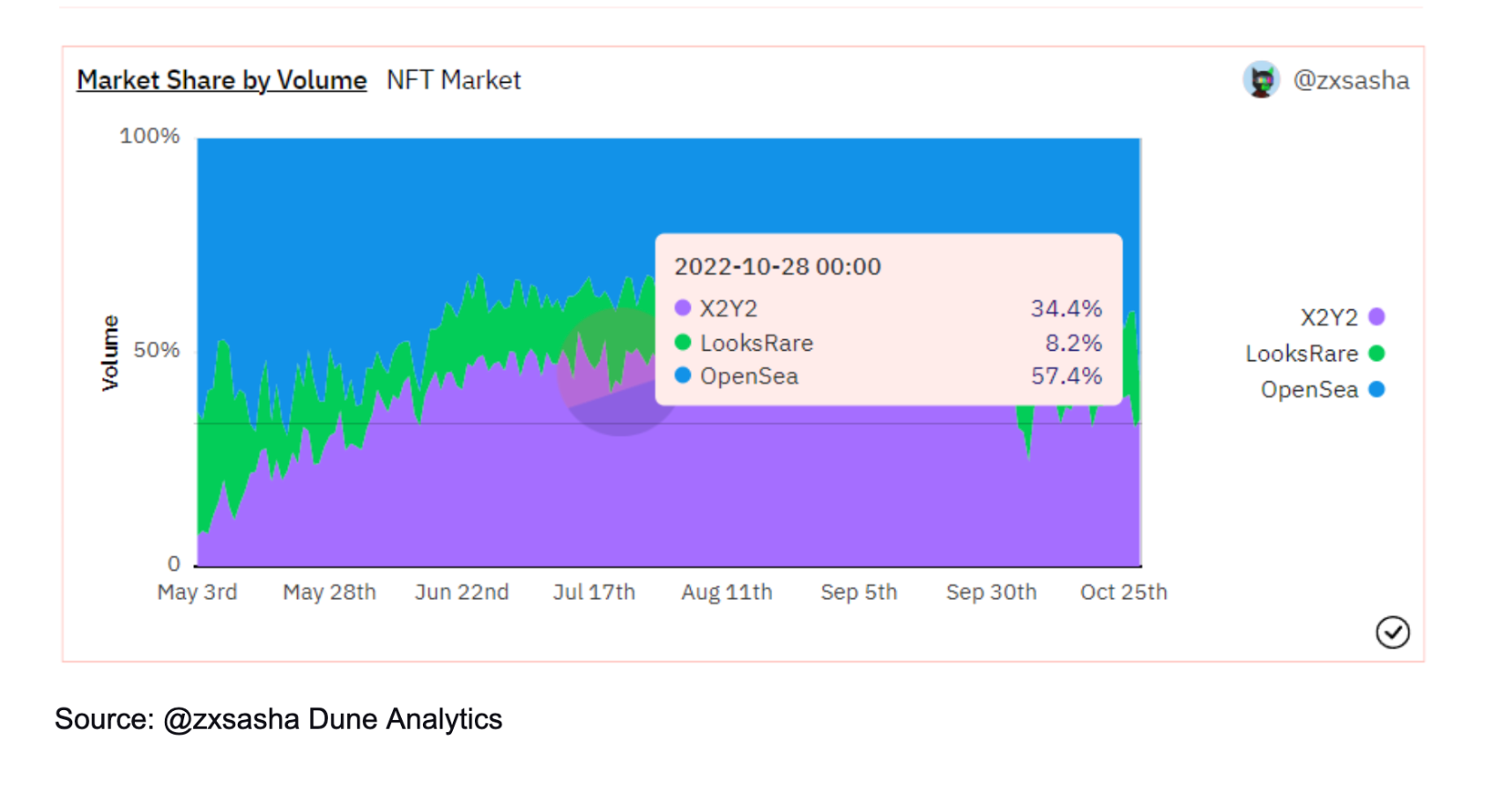 X2Y2 aims to enhance the functionality and convenience of the general NFT marketplace. Creators are supplied with developer tools to easily manage their NFTs and help in the minting process. Users have access to an inbuilt rarity ranking system, which gives them up-to-date info regarding the uniqueness of different collectibles in the marketplace.

As a decentralized NFT trading platform, it relies on smart contracts to securely automate buying and selling of collectibles. Smart contracts offer security to both creators and buyers of digital assets. Although X2Y2 facilitates trading, it's a peer-to-peer site where you transact directly with other platform users after connecting your Web3 wallet, like Trust Wallet, to the platform.

The X2Y2 token is the native token of the platform and is mainly used for staking and governance. Stakers earn a share of platform profits in proportion to their locked coins. The token's maximum supply of 1,000,000,000 was bootstrapped by an Initial Liquidity Offering (ILO) of 10,000 coins through Uniswap. Here's a detailed breakdown of the tokenomics.

What really makes this platform attractive? Here is what we uncovered from our research.

X2Y2 is a platform for buying, selling, creating, and collecting NFTs. Scroll to the “Hot collections” tab to check out the most-trending collections and other helpful trading analytics. If you’re a frequent trader, take advantage of bulk listing and purchasing, which lets you simultaneously list or buy multiple NFTs, helping you save on gas fees.

X2Y2 loan is a peer-to-peer lending function where users can borrow ETH using their NFTs as collateral. The loan security gets locked on the platform until you pay it off. Lenders are entitled to obtain collateral ownership should a borrower fail to settle the debt owed, plus interest within the stipulated time. Anyone can lend their ETH to earn yields.

Creators earn royalty fees each time their content finds a buyer. Depending on the rate, these charges could inflate the final cost of an NFT. X2Y2 marketplace has addressed these royalty payments by allowing you to decide how much you're comfortable contributing to a project. This is different from competitors like OpenSea, where you’d pay as much as 10% in royalty fees on each transaction.

X2Y2 was the first NFT marketplace to scrap compulsory royalty fees for NFT purchases. This move drew backlash from creators who were bound to lose money from it. In contrast, users embraced the change because it made transactions cheaper for them, and X2Y2 exploded in growth because of this.

Apart from staking yields and airdrops, Initial Liquidity Offer (ILO) token holders are awarded a portion of the market fee annually, even if their tokens are not locked. They, however, can’t earn staking rewards unless they manually unlock ILO X2Y2 and deposit into a staking contract. ILO wallet addresses are also eligible for free NFTs from the founding edition collection. 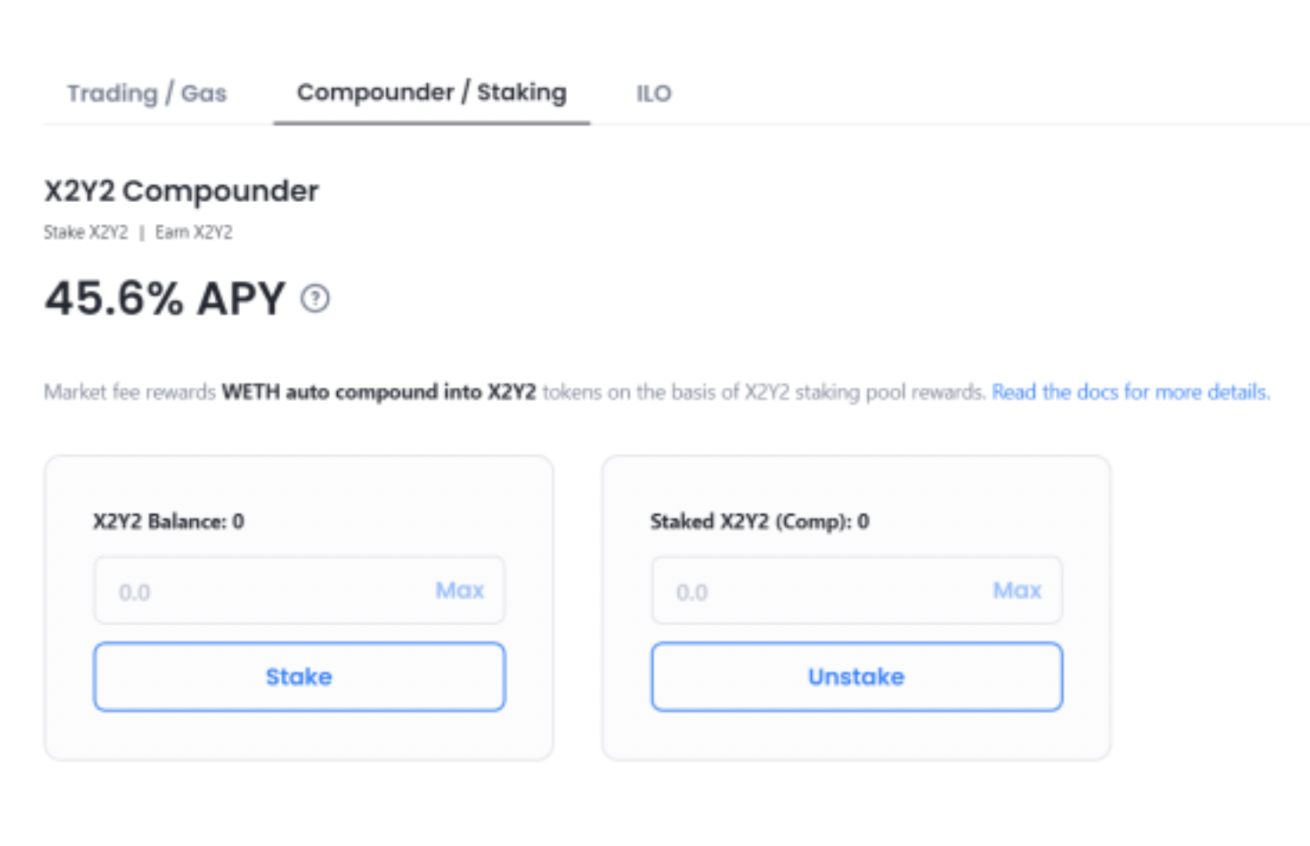 Staking X2Y2 tokens is a clever way of earning passive income. All fees collected from the X2Y2 market are shared among qualifying stakers every 24 hours. The earnings come in wrapped Ethereum (WETH) and can be claimed any time as they do not expire. So, if you don’t want to cash them out, they will continue to compound until you claim them. What’s more, the platform charges zero deposit and withdrawal fees.

X2Y2 promises an estimated Annualized Percentage Yield (APY) of 45.7%. The site offers daily staking rewards, which start compounding as long as they remain locked. To calculate your daily staking yield, you will take the:

Here's an example with 1000 staked coins:

Accrued yields: 0 (Assuming it’s the first day and you have not accumulated anything)

Remember that these daily yields may fluctuate depending on the blockchain conditions.

X2Y2 opened its doors by issuing free tokens to OpenSea users. A total of 120,000,000 coins were set aside for airdropping to crypto enthusiasts who have used OpenSea from day one to Ethereum block #13916166. There’s a catch: One must list NFTs to the X2Y2 marketplace to successfully claim free tokens. The more collectibles you add, the higher the number of coins you can claim.

What Countries are Supported?

X2Y2 does not appear to restrict service to any countries. Keep in mind that things could change in the future as more crypto regulations come into place.

There are numerous wallets you can use with the X2Y2 marketplace. First, the platform supports all WalletConnect wallets. WalletConnect is an open-source protocol that provides a bridge between over 170 crypto wallets and decentralized finance applications.

It’s also compatible with the following:

X2Y2 is the most affordable NFT platform on Ethereum. You’ll only spend a 0.5% sale fee compared to 2.5% at OpenSea and 2% at LooksRare. The site has a flexible royalty payment system where NFT buyers determine how much they are willing to contribute towards a project. Here is a quick comparison of X2Y2 fees and other key players.

Step 1: Visit the website and click on the wallet icon at the top right corner of the page.

Step 2: Select your Web3 wallet when you receive a prompt like the one below. 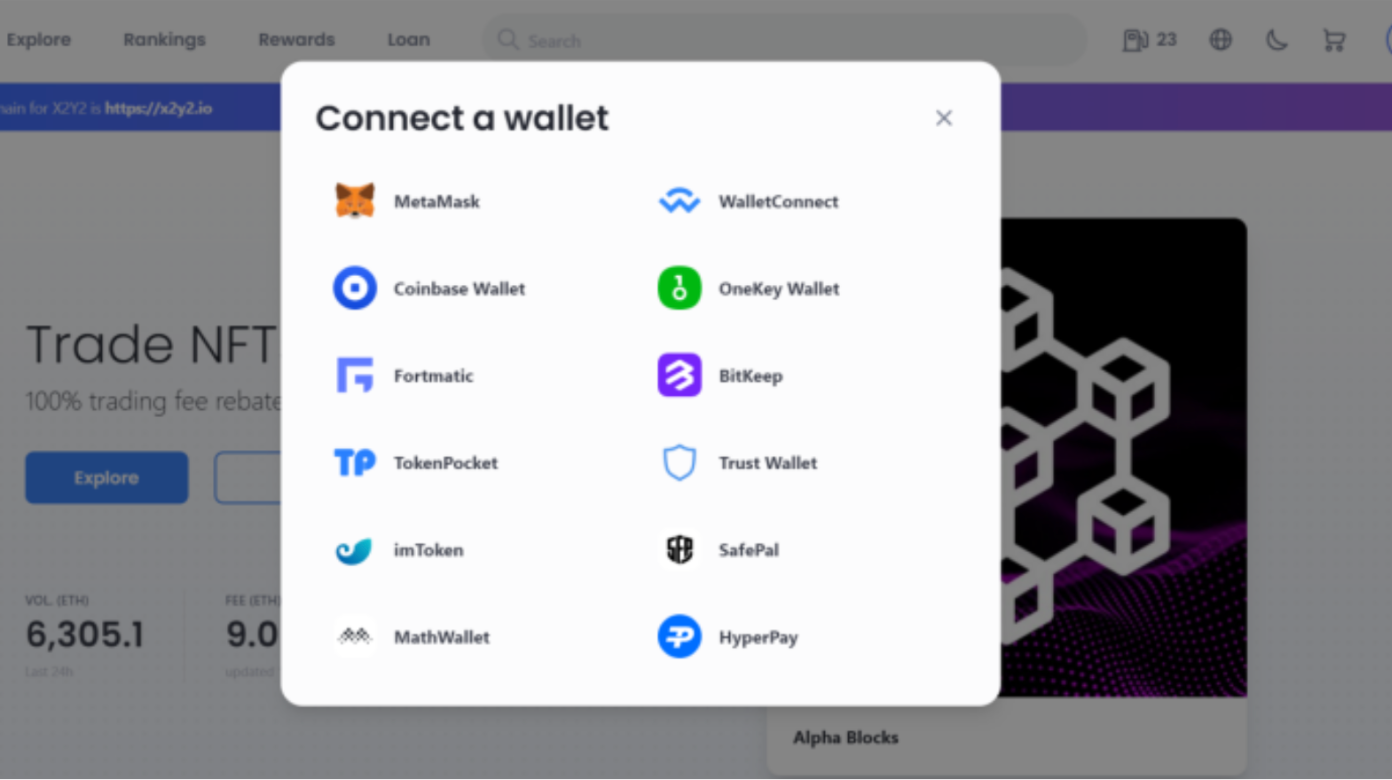 Step 3: Open your preferred wallet from your phone or tablet and scan the QR code to finish linking it with the X2Y2 marketplace. 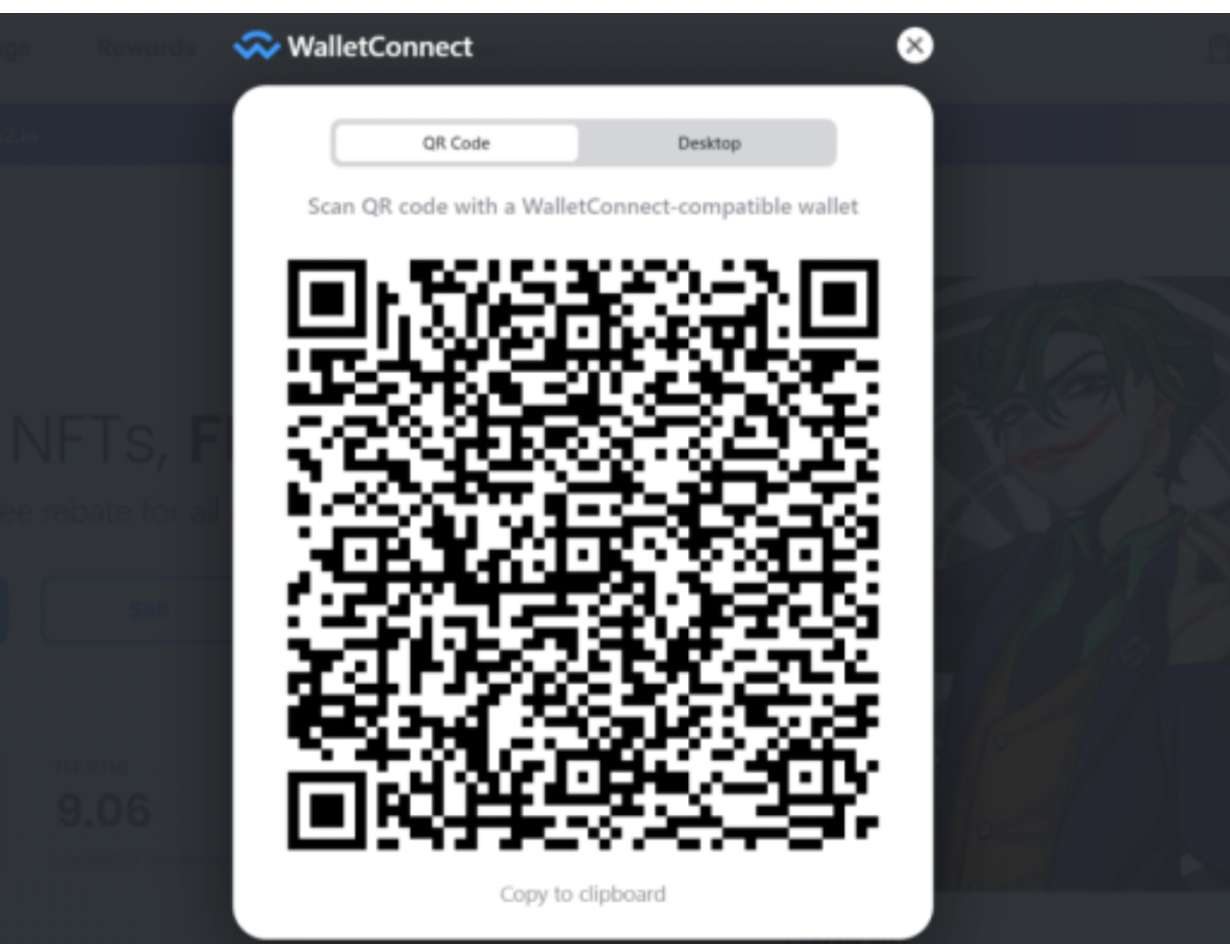 Step 4: Your wallet will connect in a few seconds, and you’ll be granted access to the site’s client dashboard. Feel free to explore. 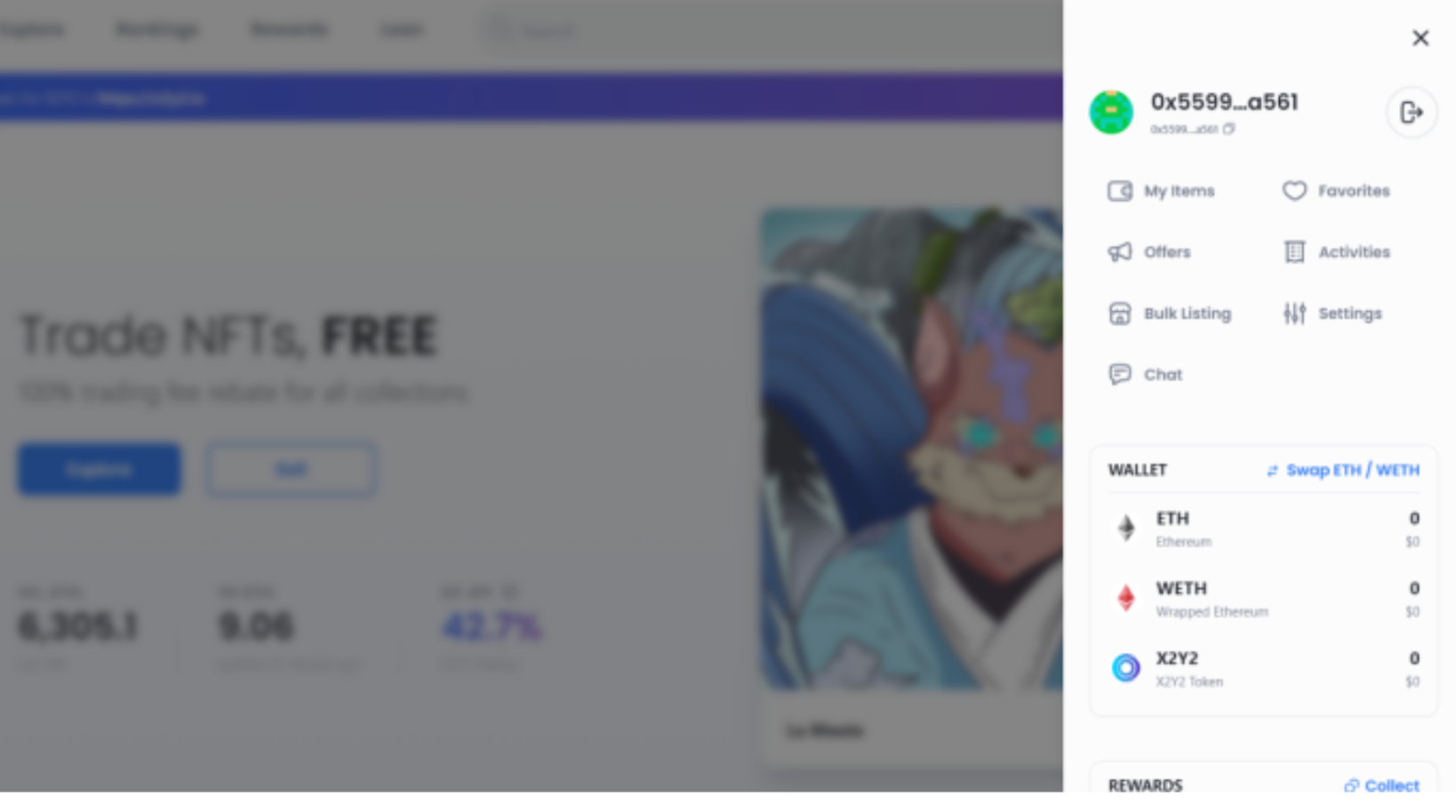 Security on X2Y2 is based on the following:

X2Y2 Compared to the Competition

X2Y2's major competition comes from OpenSea and fellow newcomer LooksRare. Here is a quick comparison of the three platforms.

OpenSea is the most significant player in the NFT sector and controls over 60% of transaction volumes. But you'll be forced to part with a high trading fee of 2.5% for every transaction. In contrast, X2Y2 charges a transaction fee of 0.5%, much lower than OpenSea. Another major difference between both platforms is that X2Y2 has its own token, while OpenSea doesn’t. Also, it’s compulsory to pay royalty fees for NFT purchases on OpenSea but not on X2Y2.

X2Y2 lets you buy or sell NFTs in bulk to cut down your gas fees, but OpenSea offers a similar feature. Meanwhile, you can import NFTs directly from OpenSea into X2Y2.

Read our full review of OpenSea.

LooksRare, an ETH-based NFT marketplace, launched in the first quarter of 2022 with attacks on OpenSea, just like X2Y2. Both platforms are community-centered and use a reward system to incentivize traders, collectors, and creators. Like X2Y2, LooksRare has a native governance token, called LOOKS. In terms of pricing, X2Y2 wins the affordability battle with a trading fee of only 0.5% compared to LooksRare's 2%. But, LooksRare recently scrapped compulsory royalty fees just like X2Y2, so it’s your choice to pay it or not.

Read our full review of LooksRare.

X2Y2 is a major challenger to big NFT marketplaces like OpenSea and LooksRare. The platform is offering much lower transaction fees to lure customers away from its competitors, and you can take advantage of it while it lasts. The main drawback of X2Y2 is that it supports only NFTs minted on the Ethereum blockchain, whereas a competitor like OpenSea supports NFTs minted on multiple blockchains including Ethereum, Solana, and Polygon.