The crypto market is notorious for its high-profile crashes that seem to inevitably follow any sustained bull runs. Long-time crypto holders are used to these cycles, but big price crashes can be concerning to new entrants in the space.

Why Crypto is Volatile

The original promise of Bitcoin — the first cryptocurrency — was to disinter-mediate money from government institutions. Before the first Bitcoin was mined, money had only ever been legitimized through a government minting a currency as its official tender.

Along the way, governments also adopted regulations and consumer protections that ensured their economies experienced as few market crashes as possible.

Bitcoin succeeded in its mission to become a currency that’s outside the direct control of major world governments, but that brought with it the lawless Wild West of financial speculation that we know crypto as today.

Normal protections that governments employ to ensure market prices are tamed before they grow out of control are not present in the cryptocurrency world, so scams, rug pulls, and plain old greed abound.

Factors like these lead to exuberant bull runs when times are good and devastating crashes as soon as the market starts a selloff. Let’s explore the biggest of these crypto crashes.

The Biggest Crypto Crashes in History

The Top Crypto Crashes of 2022

2022 has been a landmark year for the crypto world. We started the year off strong with a historic bull run, but the fanfare was cut short in spring as prices started to sharply slip and protocols like Terra buckled under the pressure.

What followed was a cascading ripple through the entire industry that took down hedge funds, lenders, and countless protocols.

Below we cover the biggest crashes of 2022. 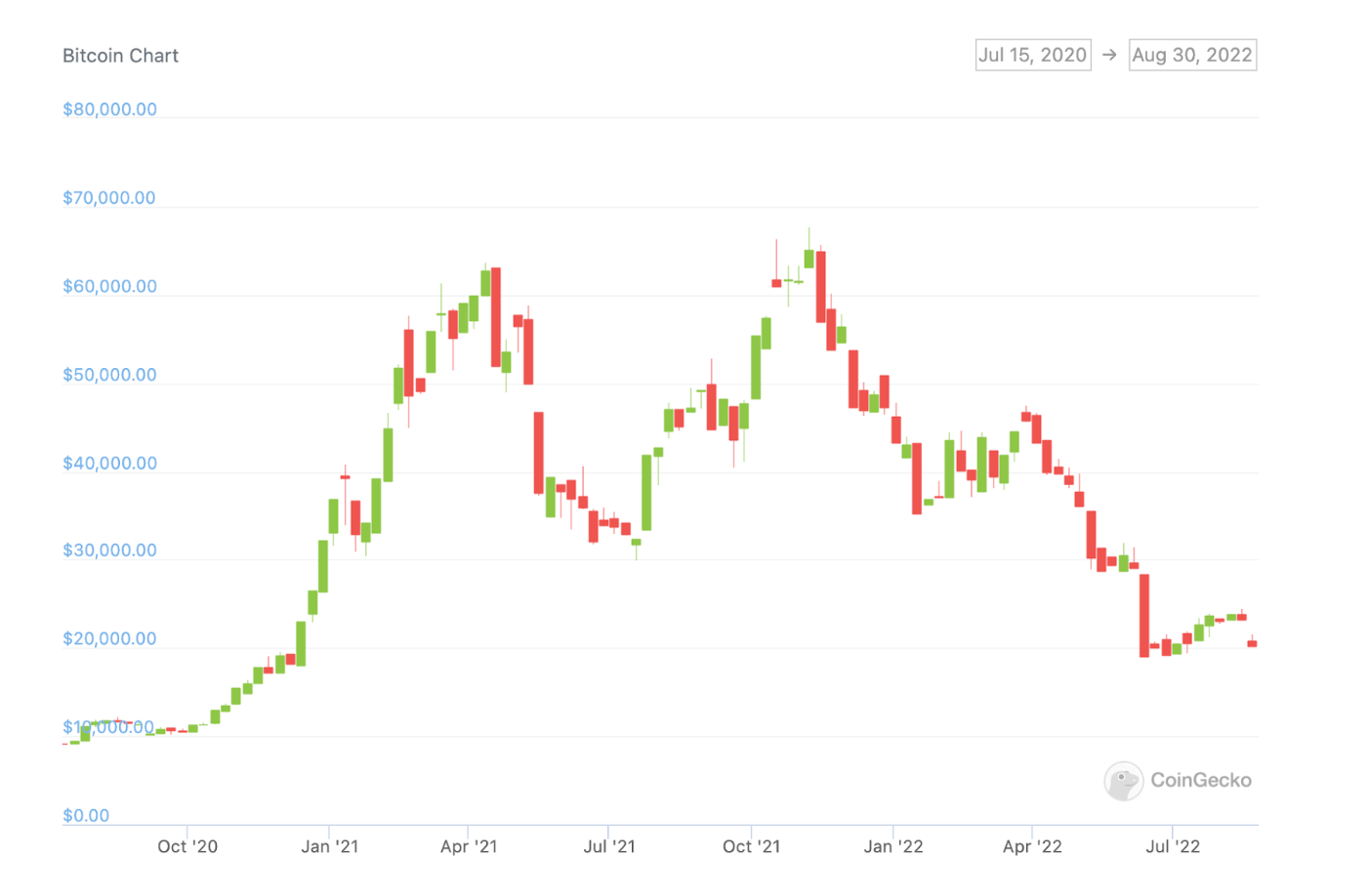 The year started off with prices slipping from November 2021 highs in what was considered to be a standard market correction.

This correction, however, took down some major crypto players and coins like Bitcoin and Ethereum drew down nearly 70% by the time the dust settled in June.

Over the course of 6 months, $2 trillion dollars of holder value were wiped out, making this the greatest crash in terms of absolute dollars lost in the history of crypto.

As of the fall of 2022, the second crypto winter (the first being in 2018) has officially been ushered in, and prices are still languishing near the bottom of the market.

Only time will tell whether these prices are indeed the market bottom for this cycle or if investors are in for more carnage over the coming months.

The biggest casualty of the 2022 selloff has unquestionably been the Terra protocol. Originally one of the biggest crypto stablecoins, Terra’s UST coin maintained a $1 peg for years until it all came crashing down in early May of 2022.

Due to the pressure of sharply falling Bitcoin and Ethereum prices, the algorithmic stablecoin UST lost its peg to its $1 target, causing borrowers that had been using the stablecoin as a crypto version of dollars to panic sell their holdings, applying even more downward pressure on the token’s price.

Terra labs, the founders of the Terra ecosystem and creators of UST, deployed their entire Bitcoin reserves (around $3.5 billion dollars) to stabilize the UST $1 peg, but it was all for naught. Once the crash started, there was no reversing it. 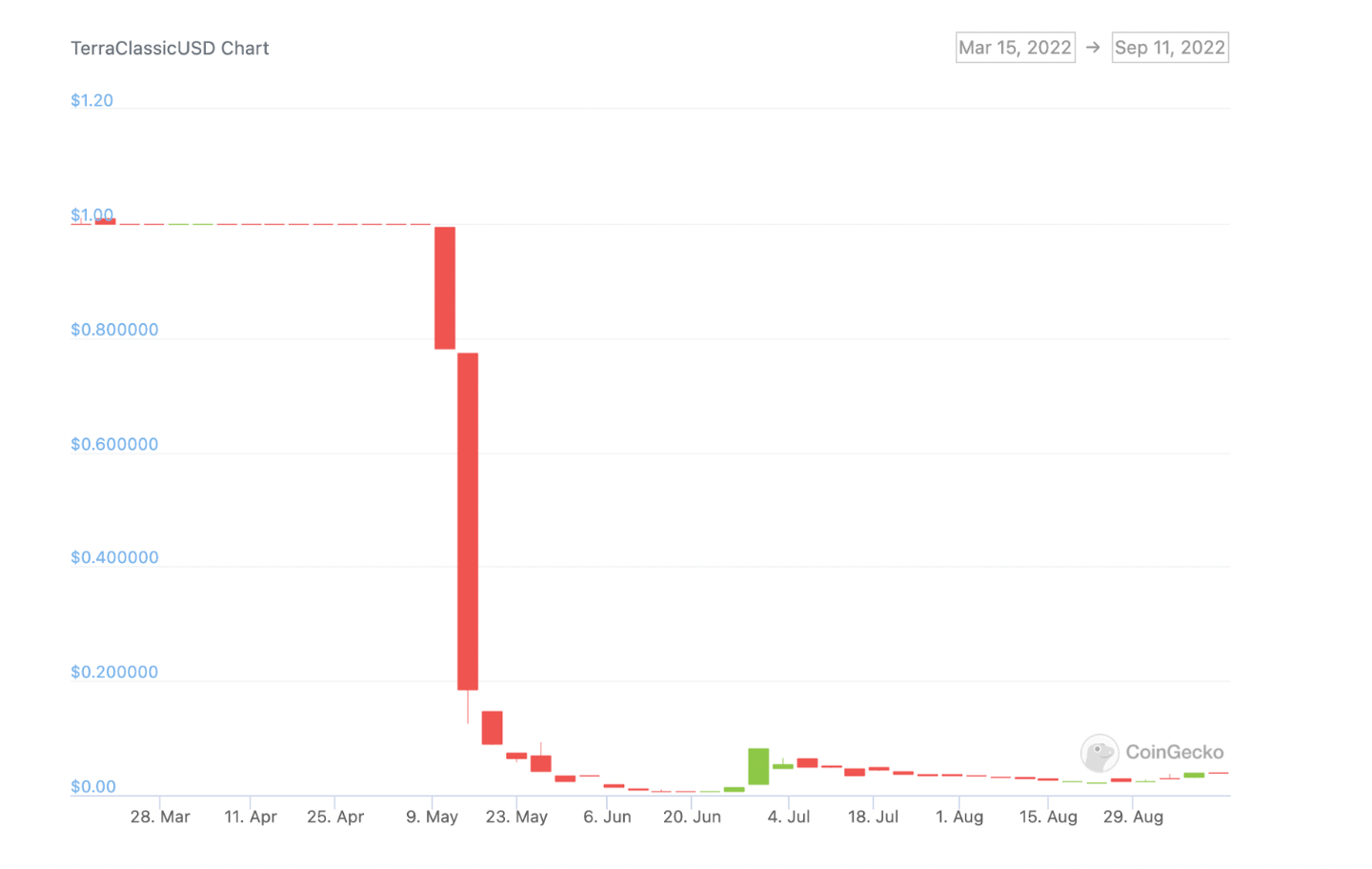 The Terra collapse devastated retail and institutional investors alike. While the industry is used to sketchy coins crumbling and wiping out millions of dollars of value overnight, a stablecoin had never toppled over so spectacularly.

Many people lost money that they thought was safe from the volatility of crypto. On Twitter, Terra Labs co-founder Do Kwon lamented the impact of the collapse and admitted defeat.

Holders of the UST stablecoin were not the only ones affected by the crash. The Terra governance token, $LUNA, also experienced a massive devaluing, falling from an all-time high of $116 to just 1/100th of a cent.

This represented a $45 billion dollar wipe out of wealth over the course of just a few weeks. 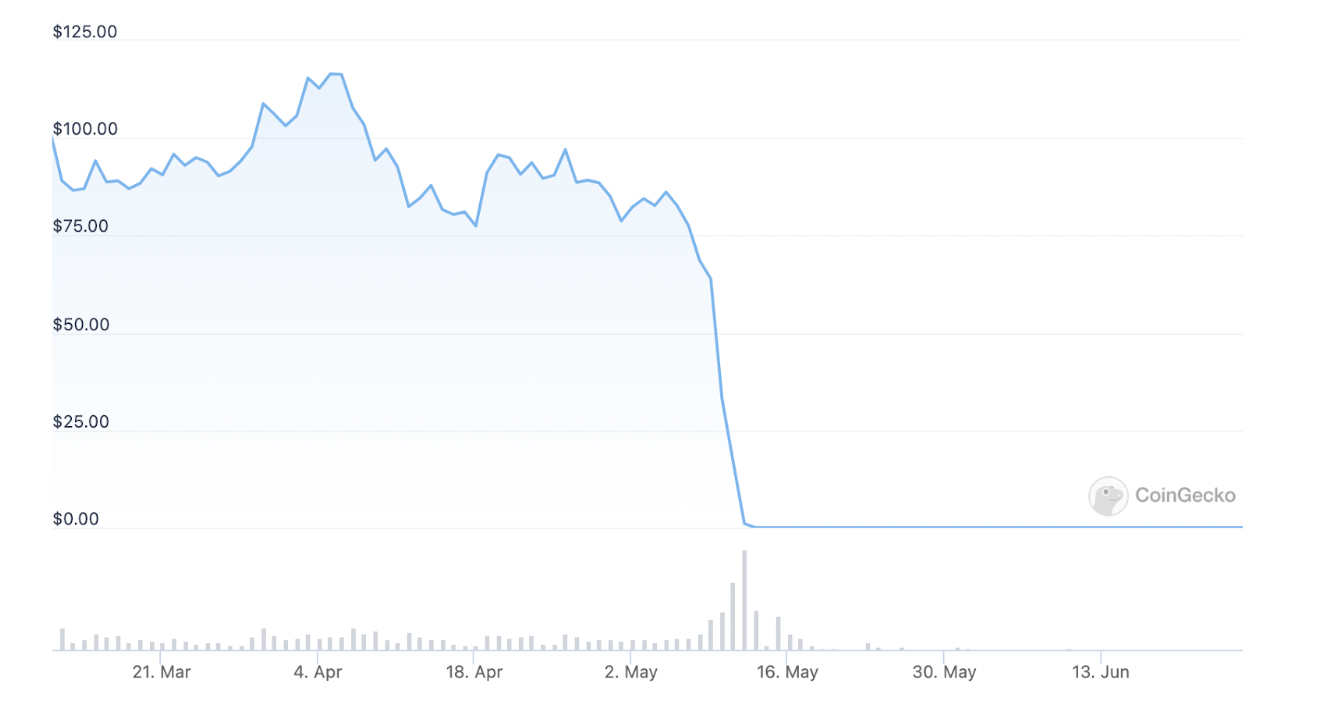 The reverberations of the Terra debacle were felt throughout the entire crypto world. In July, 3 Arrows Capital (3AC), one of the largest crypto hedge funds, filed for bankruptcy, leaving more than $2.8 billion dollars of its creditors with an uncertain future.

In June, the crypto lender Celsius also filed for bankruptcy with a $1.19 billion deficit on its books. Crypto lender Voyager Digital was exposed to the 3AC bust in a position worth over $650 million dollars that forced them to close their doors as well.

Finally, one of the largest retail crypto platforms, BlockFi, was forced to suspend all client withdrawals in effort to contain the crash and remain afloat.

The Terra contagion wasn’t limited to those directly exposed. It is estimated that over $500 billion dollars of crypto losses can be attributed to the stablecoin crashing making it the most impactful single event in crypto ever.

Notable Crypto Crashes of All Time

While 2022 has seen the biggest blow-ups in absolute dollar terms, the crypto market has been crashing regularly since its inception over 10 years ago. Below are some memorable falls from grace that include mass selloffs, hacks, and straight-up fraud. 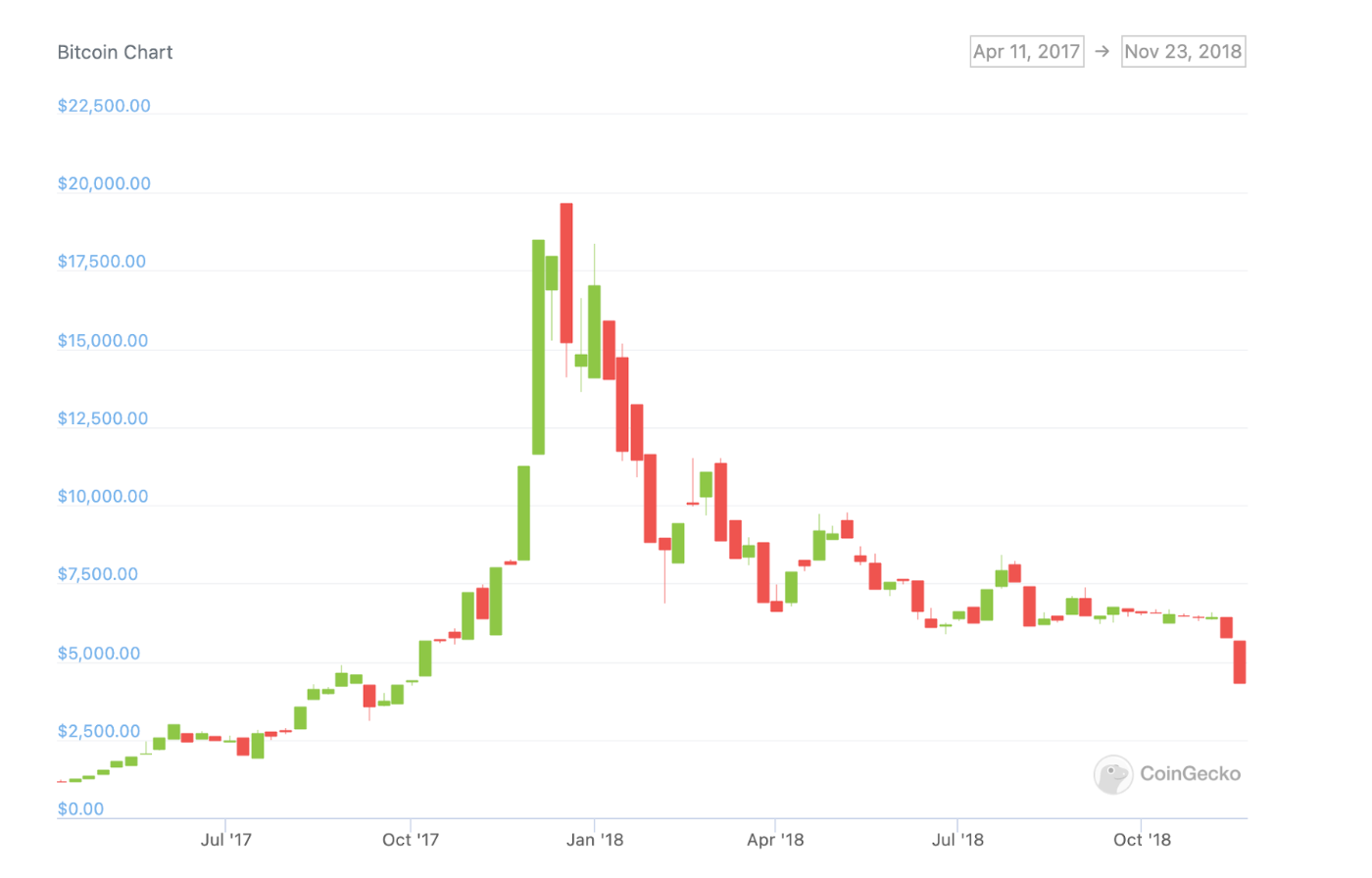 The first crypto bull run to hit major headlines all around the world was in late 2017. The exuberance was at a peak as Bitcoin, and other cryptocurrencies hit the mainstream consciousness.

The euphoric market climb and spectacular crash that followed shortly after drew comparison from major media outlets to the 2000 dot-com bubble, which also saw irrational exuberance in the tech sector followed by a massive collapse.

Crypto markets lost 80% of their value during the 2018 crypto winter and stayed at a depressed price for several years.

Critics and skeptics called it the “end of crypto, once and for all.” It wouldn’t be until 2020 that prices climbed back up to their previous records, and the bear market in between the 2018 crash and the 2020 recovery has come to be known as the first “Crypto Winter.”

In 2014, the cryptocurrency space was still a nascent online corner occupied by nerds and shady dark web dealers.

The major and practically only cryptocurrency back then was Bitcoin, and it experienced its first substantial bull run during the winter of 2013, breaking $1,000 in price for the first time and topping off at $1,127.

At the time, 70% of all Bitcoin trading volume went through an exchange called Mt. Gox. In February of 2014, however, the platform identified that it had been experiencing a drain of funds from client accounts and halted trading to investigate the matter.

It turned out that the exchange had silently lost over 740,000 Bitcoins to hackers. This is a staggering number that represented around 6% of all Bitcoin in circulation at the time.

In 2014 prices, this loss was equivalent to $460 million dollars, making it one of the biggest crypto hacks in history, but had these Bitcoins been valued at their peak November 2021 price, the sum would have been over $50 billion dollars in lost BTC.

The Mt. Gox uncertainty dealt a devastating blow to the price of Bitcoin, seeing it crash from a high of $1,127 in November of 2013 to a low of just $360 at the beginning of April the following year. 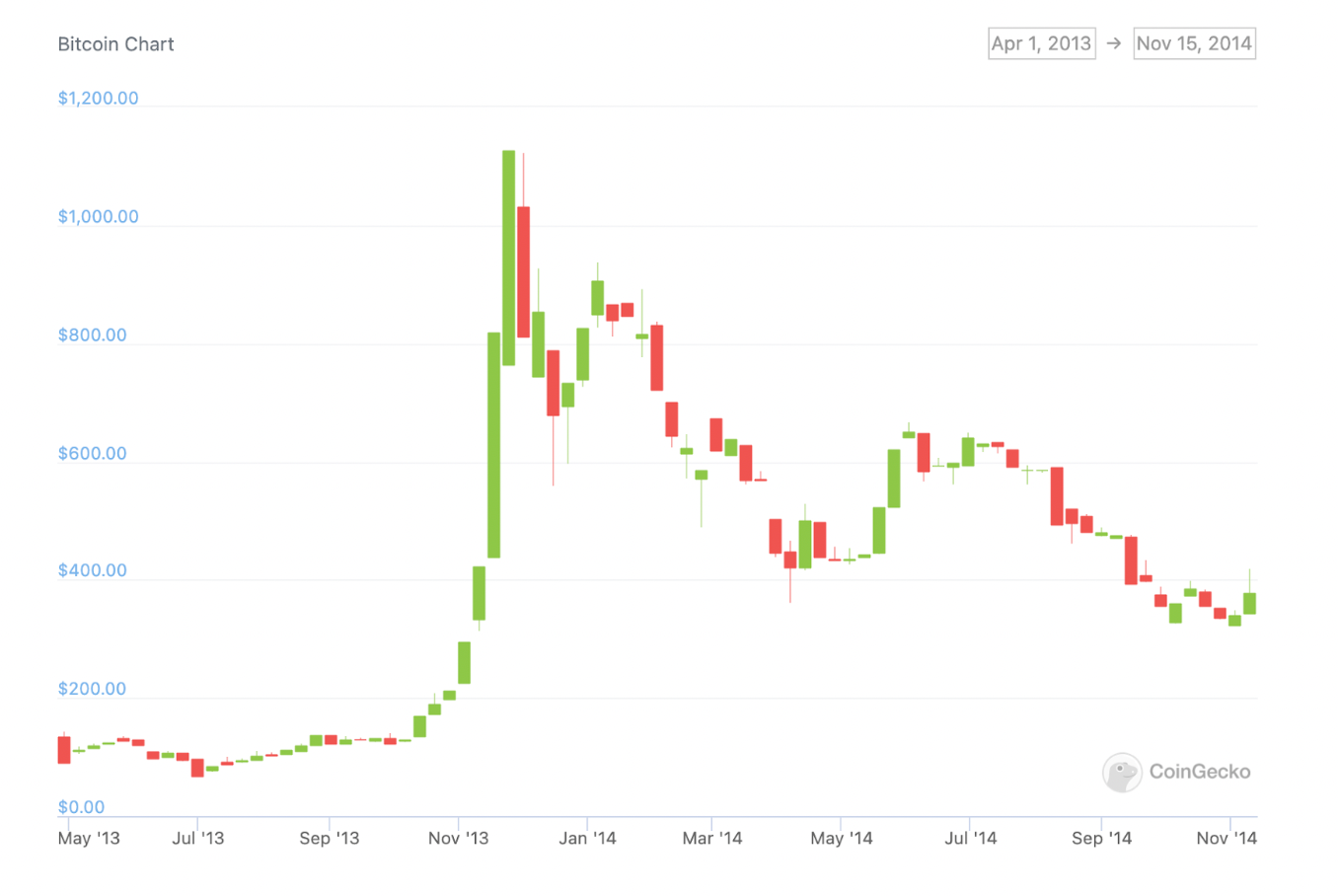 Bitconnect was a trading platform that incentivized users to deposit their Bitcoin in exchange for the platform’s native BCC token.

The platform promised returns of “up to 40% per month”, paid out in the BCC token. The token appreciated in price steadily over the course of several months until it all unraveled and crashed at the beginning of 2018.

Bitconnect, when pressed to answer how they achieved such astronomical returns on new deposits, referred to their mysterious “trading bots” that supposedly timed market moves to make money for investors.

Many seasoned crypto veterans openly called Bitconnect a Ponzi scheme, inferring that the yield awarded to clients was actually coming from constantly onboarding new users who deposited their money onto the platform.

Despite widespread skepticism, it wasn’t until the security boards of Texas, and North Carolina sent cease and desist notices to Bitconnect that the exchange was forced to close their doors to new clients, and the scheme collapsed.

The BCC token crashed from an all-time high of $509 to just over $8 in the course of a month. Billions of value were wiped out in the blink of an eye, and Bitconnect ended up the butt of internet memes and jokes as the fraud was exposed.

No crypto collapse story would be complete without discussing FTX, the exchange that landed in bankruptcy court, along with its sister company Alameda Research.

At the heart of the trouble, the FTX exchange token, FTT, comprised about a third of Alameda’s balance sheet. However, the thinly traded token led proved a fragile asset. Amid selling pressure for FTT after the token’s prominent balance-sheet role became public, the FTT token price collapsed to under a dollar compared to an all-time high of $85. In the days prior to the selloff, FTT traded in the low 20s.

Simultaneously, the FTX exchange saw a massive wave of withdrawals from shaken customers, with billions of dollars in withdrawals in a single day reported by then-CEO Sam Bankman-Fried in a Twitter thread.

The collapse and wave of withdrawals led FTX to file for bankruptcy, but not without taking a few other industry players down as well. Genesis Trading and BlockFi, well-known crypto lenders, both filed for bankruptcy as well following the FTX collapse, each having exposure to the FTX or Alameda. Genesis reportedly still owes $900 billion to Gemini, another popular crypto exchange.

Following the fallout, Bitcoin reached its low for the year, and Solana, a token supported by FTX and Alameda, fell below $10 compared to its 2021 all-time high of $260 reached a year before FTX’s collapse.

Crypto as an industry is rife with booms, busts, and collapses. While some of the selloffs happen due to natural market cycles, many platforms and protocols have collapsed under the weight of their questionable legitimacy.

If you’re looking to invest in cryptocurrencies, remember that crypto is a volatile market, and you may end up losing more than you thought possible.

Some good rules to keep in mind are that if returns seem too good to be true, they often are, projects can go up in price for a long time before collapsing all at once (so just because a project has a price history of appreciation does not mean that it is legitimate,) and even projects like stablecoins are not fully insulated from the volatility of the crypto market.

As far as the broader market goes, crypto is definitely in an extended bear market — sometimes called a “winter” — for the second half of 2022.

A Despite prices languishing, there are more crypto projects than ever being built, and talent continues to enter the space at record rates.

Long-time crypto supporters have faith that the low prices are a periodic lull and that the next bull market will make the last two look tiny in comparison.

Only time will tell, but if there’s one thing we know for sure, it’s that crashes are an inevitable part of crypto, and we are still in store for many more.