GM, this is the Milk Road. Your tour guide around the wild wild west of crypto.

A new mental model for crypto

When Naval talks, I listen. The guy’s track record is impressive:

The word “exit” stood out to me. The most important products are “exits”.

For example, Tesla was an “exit”. An exit from gas guzzling cars. Airbnb was an exit from cookie cutter hotels.

Crypto is an exit. A life raft. A parachute to jump out of the traditional financial system.

Bitcoin to store your wealth. Ethereum to pay for compute. DeFi for lending & borrowing. NFTs for art and memberships. DAOs for collaboration.

There’s a great talk by Balaji where he talks about the concept of “Voice & Exit.”

Voice is trying to change a system from within. Like when you file a complaint with the manager or vote for a new mayor.

Exit is when you leave the system for a better one.

One isn’t better than the other. But they are more powerful when both are an option.

For example, what good is your complaint if the person in charge knows you have no way to exit? That’s how Comcast can get away with shitty customer service, they know you don’t have an alternative.

Crypto is an exit from the financial system where governments print money and banks control who gets loans, credit, etc..

Don’t like inflation? Exit to bitcoin, with a fixed supply.

Don’t like your bank? Go Bankless and do your lending/borrowing/saving in DeFi.

Don’t like the country club? Exit to an NFT social club.

This is a powerful new mental model for me. Crypto is exit technology.

But…the stock is down 3% today because they said Q1 (the current quarter) is going to be slower due to the overall market being down.

Block (the artist formerly known as Square) is different. They only focus on 1 asset - Bitcoin. And they sell A LOT of it.

Square and Robinhood both added “buy crypto!” buttons to their apps, and brought in hundreds of millions in profits.

That’s why the news about FTX launching a whitelabeled product is a big deal.

It’s crypto-as-a-service.  You can basically add “buy/sell crypto” into any app (without asking your engineering team to build a compliant, secure, crypto trading exchange).

It’s like adding a Coca-Cola vending machine to your shop.

Imagine, if Instagram just had 1-click NFTs that you could buy and sell? Or if every time you bought something on Amazon, you could round up and automatically buy crypto?

That's what FTX is gonna power every app in the world to be able to do with the click of a few buttons!

In mid-December, De'Aaron Fox (an NBA point guard) announced an NFT project where he'd be giving away a bunch of cool stuff (tickets, scholarships, etc) to NFT holders.

His roadmap worked.  He built a 100k+ person discord and sold $1.5M+ of the Fox NFTs below

Then, this week the project deleted it's social media accounts and the Discord was basically gone.  That's what we call a "rug" around here.

De'Aaron followed it up with a lame apology on Twitter: 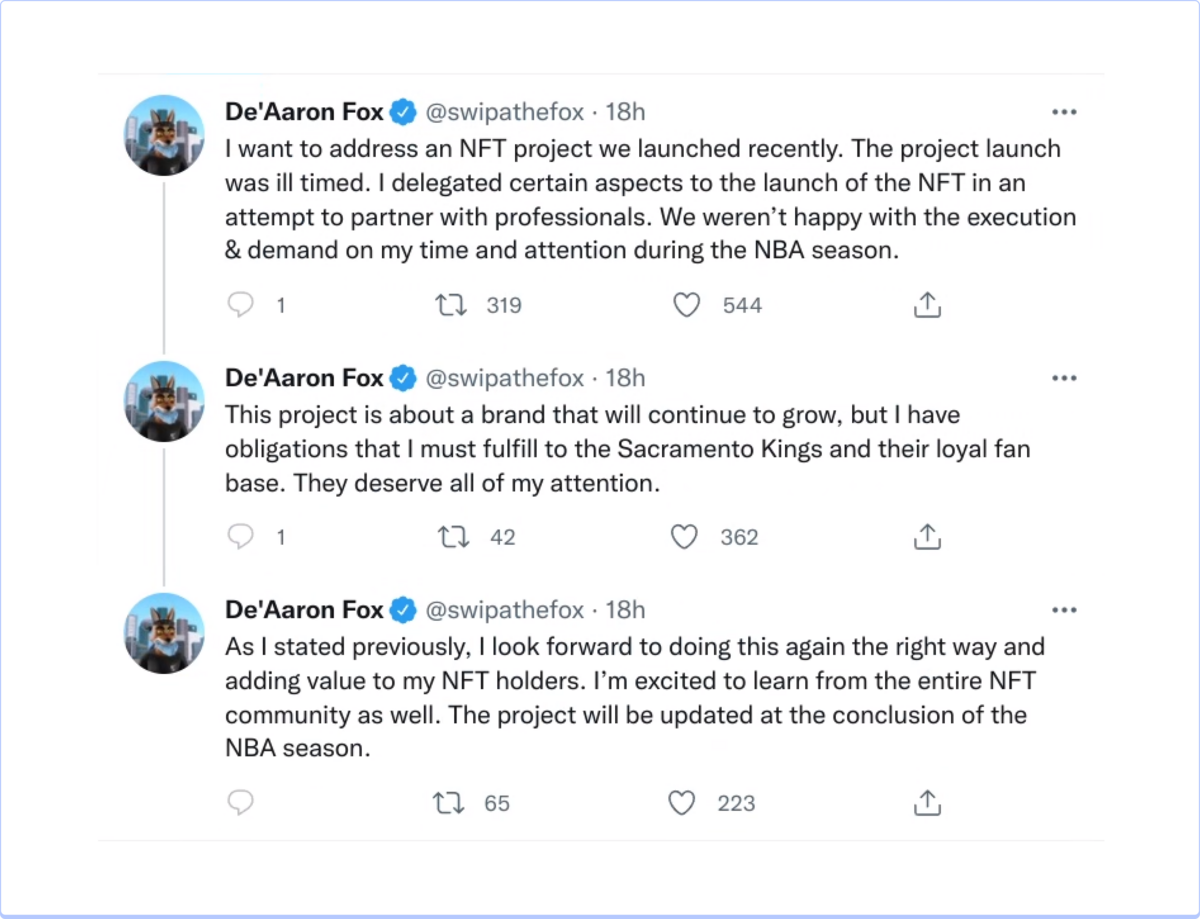 Is $500M of ETH about to get liquidated?

A month ago ETH was crashing and a tweet went viral because a guy was asleep and his $600M ETH position was about to get liquidated. 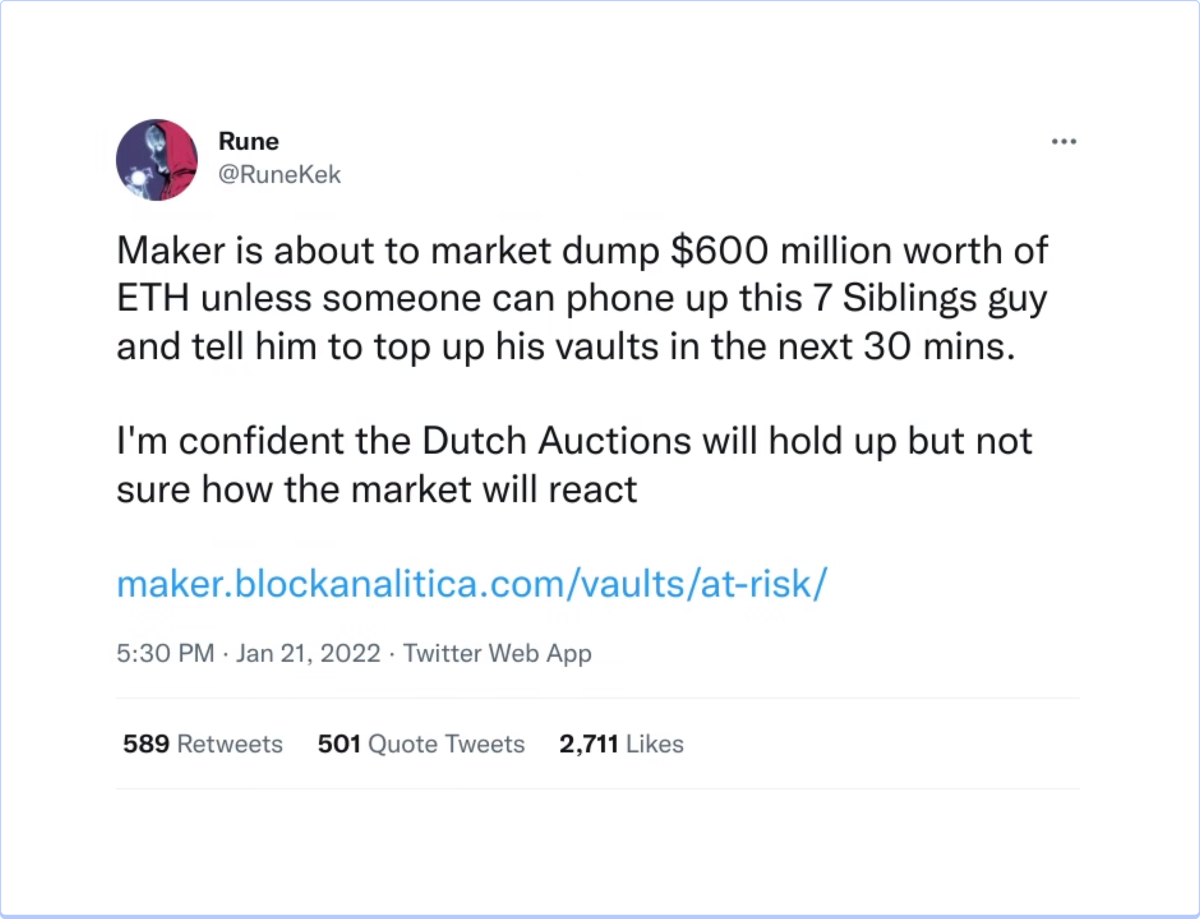 Basically, he had so much leverage, that when the price hit a certain point, his position would get liquidated as a margin call. 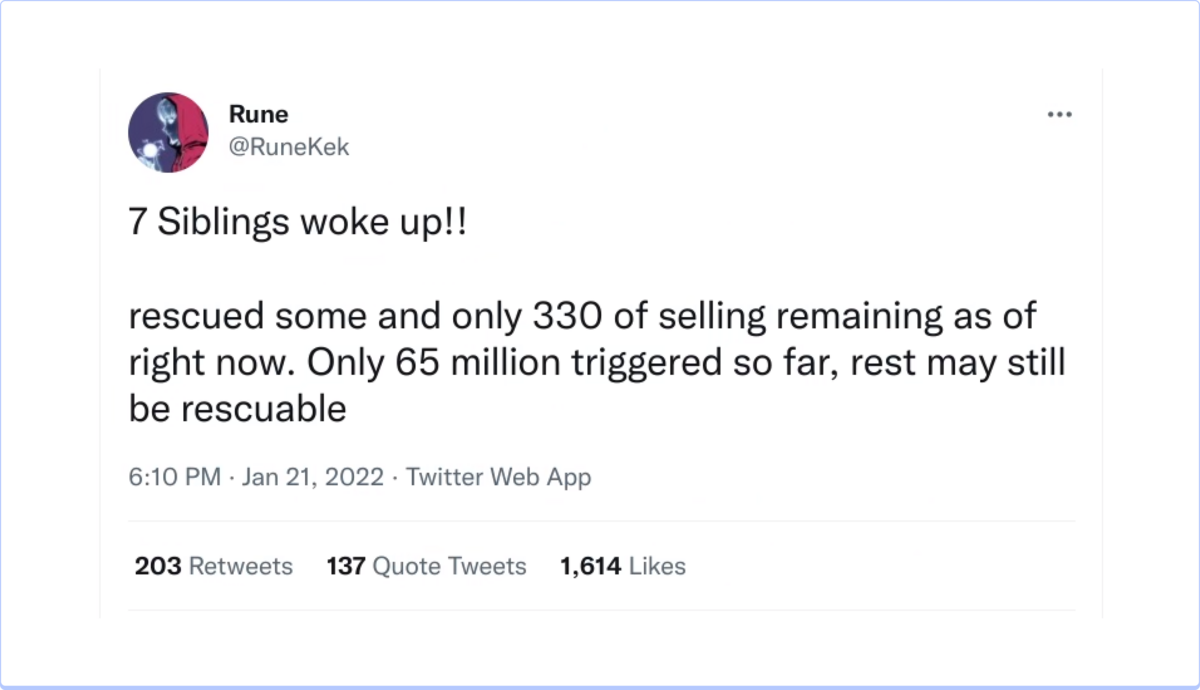 Guess what, 7 Siblings is right back to where he was a month ago.  He levered back up and he has multiple debt positions on Maker vaults totaling about $500 million.

All these positions have liquidation prices around $2,100.

If ETH falls below this level before 7-Siblings can re-collateralize, then he'll lose the collateral as the system automatically liquidates the funds.

His portfolio needs its own TV show on TNT. They Know Drama™️

Another week, many more dollars into crypto startups ($460m to be exact)!

If you wanna track 'em all, go here.

This week's Funding Friday is presented by Free Agency

Tired of watching Web3 from the sidelines?

You can do it, but let's be real: it’s painful, outdated, and you aren't getting the return you deserve.

When you're writing your own resume, scouring the web for open roles, or blindly negotiating an offer — you're not maximizing your outcome in the market. All of this takes time, energy, and expertise.

What if you had an agent run your search for you?

Athletes like LeBron and entertainers like Zendaya have teams and agents that manage the "business side of their careers". They get to focus on their craft, while their teams take care of the back end.

If you’re ready to make a move and want an expert team behind you: click here. (U.S. only for now.)

Wanna catch up on what you missed this week? Some random dude replied to one of our emails this week and said  "'Twas dope."

Time for me to go get that Friday workout in, See ya Monday!

What'd you think of today's email? (We read every single one of these 😀)