GM, this is the Milk Road. Your daily info bomb. We’re the all pump, no dump place for web3.

Why are prices going up? People suspect it is because Do Kwon (founder of Terra) has said he's buying $3B+ worth of bitcoin for a long hold...and he started doing it.

We told you about this move a few days ago, so if you bought that day, congratulations and you’re welcome :)

The Fear and Greed Index is rising…a week ago we were at extreme fear (price was ~$40K BTC), and now we’re at neutral and price has moved +10% in that week. 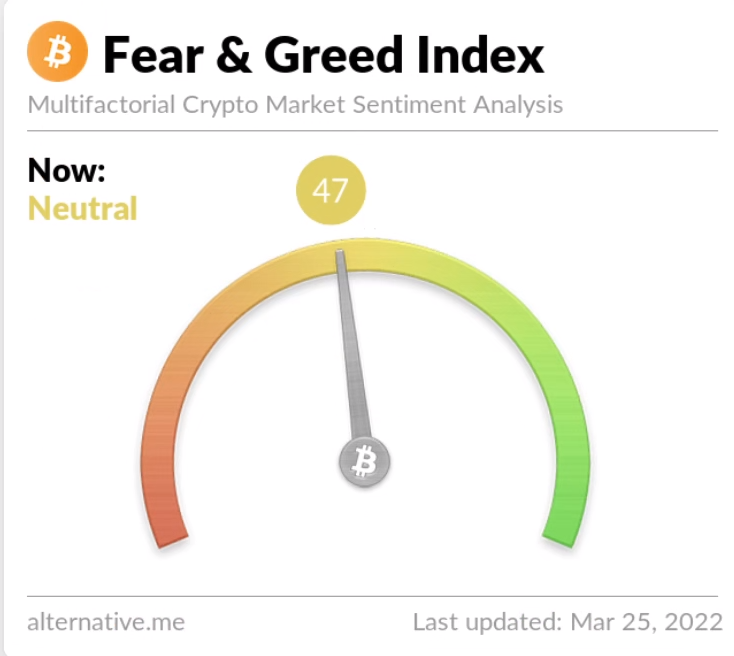 Wanna get caught up on what everyone's talking about?

Over $2.5B was raised in Web3 companies and funds this week! Who got the bread???

FanCraze raised $100M as an NFT marketplace to collect and trade official cricket collectibles.  Yes, this is “Topshot for Cricket.”

Dave raised $100M from FTX. Dave actually doesn’t do any crypto today. It’s a banking app. But with FTX taking a big stake, this could be their move into crypto<> banking.

Worldcoin (Sam Altman is co-founder) raised $100M to scan your retina in exchange for crypto. This will create a global unique identity (1B+ people don’t have passports, IDs etc.). But people think it’s creepy because it’s an eyeball scanner.

Wanna see all the web3 companies that have raised funding this year? We have a full database here.

A DAO IS BUYING A SAILING TEAM

What happened? SailGP is a big sailing league started by Larry Ellison (founder of Oracle and former owner of the Warriors). They partnered with NEAR protocol to create a DAO for fans to be able to own a sailing team

Today, sports teams are owned by billionaires. In the future, a big group of fans will form DAOs to buy teams. This is the first sports league to let that happen.

Groups like Krause House are trying to buy an NBA team, but the NBA is tough on rules.

I like this approach of showing that DAOs can own teams by starting in niche leagues like Sailing and working their way up the food chain.

NOW YOU CAN BUY DOGE WITH YOUR FLAMIN' HOT CHEETOS

There’s more than 50,000 Bitcoin ATMs at convenience stores all across America right now.

If you’ve never used one, they work just like exchanges - you can buy crypto with your cash or you can sell your crypto and get cash back.  Plus you can take out cash like a normal ATM.

Bitcoin of America is one of the most popular ATMs with over 1,800 locations.  Their model is brilliant, they pay $500 to the store owner and get to park their exchange right next to the Snickers bars at the front counter.

Today, they announced that Dogecoin is being added to their ATMs.

Dogecoin proceeded to go up 14% in price after the announcement.

WHAT IF HOLLYWOOD HAD NFTS? 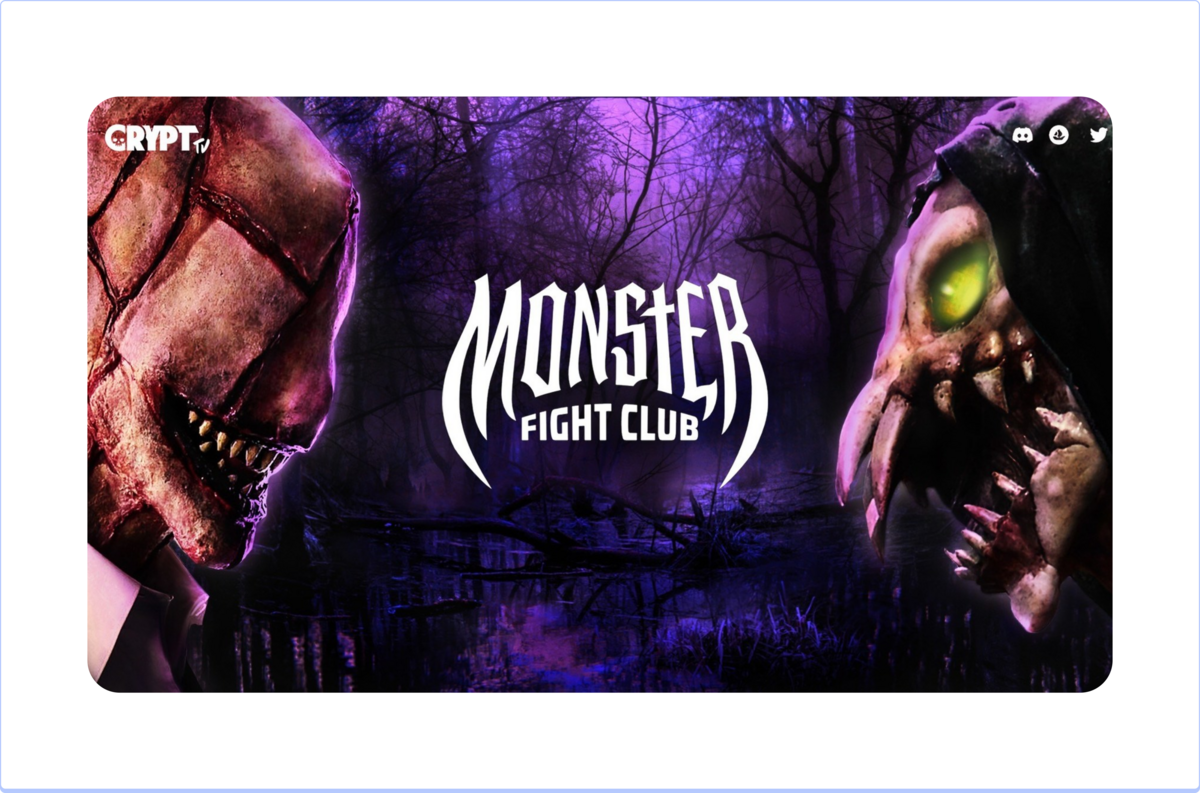 I’m a big fan of Bojack Horseman on Netflix. Some might even say, a superfan.

Now, when it came out, I believed in it’s potential, but I had no way as a fan to:

That’s what NFTs could be used for.

What if a show or movie came out, and then it “fan funded” future seasons by selling NFTs?

Those NFTs would let superfans show they were an early believer.

It would let the show makers fund the next season (without convincing Harvey Weinstein to give them money).

And it would let the fan benefit as the show got more popular if their bet was right!

This is just like collecting basketball cards of rookies that you think are going to be big someday (btw, did I mention I’ve been collecting Kevin Durant PSA 10 rookie cards?)

We’re starting to see this happen. Jason Blum backed Crypt TV and they're doing this.

We’ll be watching this experiment to see how it does compared to projects that take NFTs and turn them into movies, books, and products (I.E. Jenkins The Valet and GMGN Bored Ape Cereal).

DO KWON MAKES HIS FIRST BUYS

Ahhhh…the beauty of seeing everything on-chain.  We told you a few days ago that Do Kwon (founder of Terra, the company that makes Luna and stablecoins) was going to start buying billions of dollars in bitcoin.

So, smart people started watching for these buys on-chain.

And here’s exactly what they bought and when: 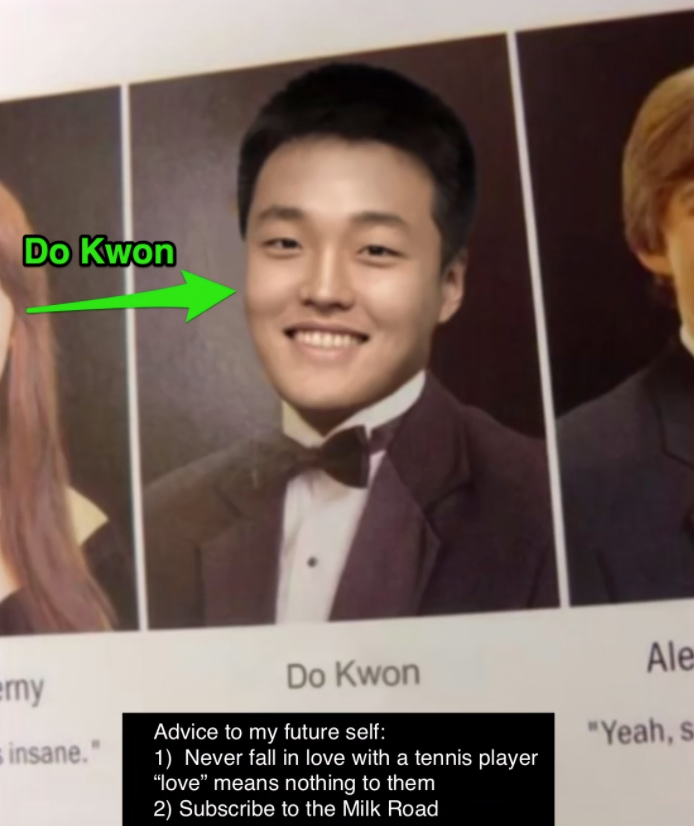 RUSSIA IS TRYING TO SELL OIL AND GAS FOR BTC

The rumors are that Russia is looking into exporting oil & gas for Bitcoin.  This isn’t a huge surprise with the sanctions put on them by the US & EU.

If you wanna revisit our take on why this is a watershed moment for crypto, you can read our take here.

I WROTE TODAY'S EDITION IN MY JAMBY'S

Confession. I haven’t worn pants since 2019.

You see - the pandemic made me question many things.

The health of our country. The effectiveness of n95 masks. And most importantly, if I should ever wear pants again.

That’s why I wear Jamby’s. They are crazy soft boxers:

Their team worked at places like Lululemon and Nike, and now they make the best clothes for sitting at home on your computer. I wear them so much, I let them pay for this ad read in Jamby’s boxers instead of cash. Seriously. Go try it, you’l thank me later.

See ya Monday, ya Hooligans!

Reviews from The Road

Getting warmer (thanks Gspot!)

Aaaand there it is.

Soooo don't just leave us on read, tell us, what'd you think of today's email?