Our take on Aave

Aave offers a proven platform for crypto holders to lend or borrow tokens. Version 3 brings support for additional Ethereum-compatible blockchains, allowing lower costs and faster executions. I found Aave easy to use – but not always intuitive, although answers were often found in the documentation. Overall, Aave provides a well-polished DeFi solution if you need to borrow or put your crypto to work earning a yield.

Version 2 of Aave is still active and supports the Ethereum network as well as Polygon and Avalanche. Version 3 now supports Ethereum, but also expands the list of Ethereum-compatible networks to include Arbitrum, Optimism, and more. Version 3 is the default and brings enhanced risk management as well as a broader range of networks and tokens.

Aave’s platform is non-custodial, meaning you control transactions from your own crypto wallet. However, when supplying on Aave, you deposit your tokens into a smart contract which can liquidate your (collateral) tokens if needed to repay a loan.

While you don’t have complete control over your tokens, you can withdraw at any time (if your tokens aren’t used as collateral for a loan).

I took Aave for a spin, testing its features, pushing and prodding to see what breaks. Nothing broke, although some of Aave’s features (flash loans) may remain out of reach for traders without coding chops.

I found Aave’s basic features, such as lending and borrowing, easy to use. Most questions I had were answered in the vast documentation. Aave’s Discord channel helped as well.

I connected Aave to MetaMask to explore, choosing the fast and affordable Polygon network to perform transactions.

Aave supports 20 crypto assets for deposit on Polygon, but other networks offer fewer choices. For example, I could only choose from nine types of crypto to deposit on Arbitrum.

If needed, you can buy tokens through a third party on Aave. I was offered Transak in my region. Transak didn’t support all tokens on Aave, however.

Here are the purchase fees for WETH (wrapped Ethereum):

To fund my account, I chose MATIC I bought on Coinbase. A click on the “supply” button let me choose an amount of MATIC to deposit and then whisked me away to an approval page in MetaMask. 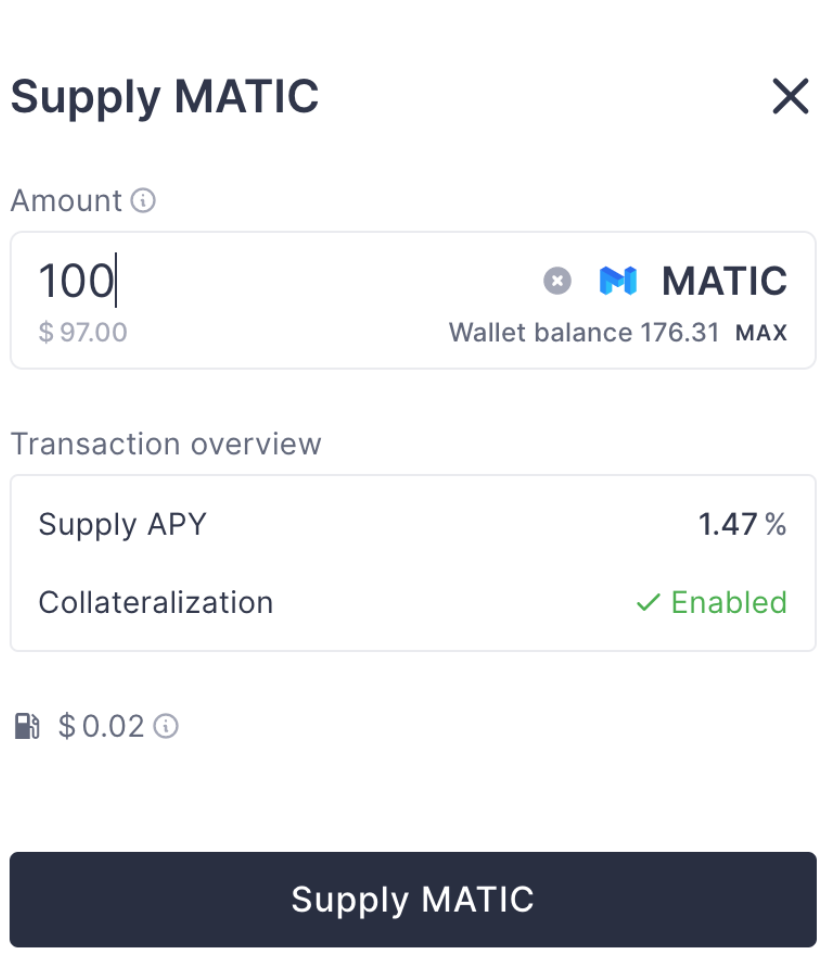 Deposit values are shown in token quantities and USD market values. Aave uses an oracle, a link to the outside world, to get up-to-date pricing from exchanges. A fallback in the code sources token prices from Uniswap.

Every token you can supply on Aave pays a yield (except for the Aave token itself).

Most yields range from under 1% to 2.5%. The MATIC token I initially deposited paid 1.47% APY (annual percentage yield). A sortable list of supported tokens made it easy for me to choose a token with a higher yield.

Aave’s protocol sets rates by supply and demand. Supplied tokens go into a pool. As borrowers access a larger percentage of the pool, borrowing APYs increase. This increase in rates benefits suppliers for that token. Only a portion of your supplied tokens will be borrowed, however, so you’ll see a gap between the Borrow APY and the APY yield you earn.

CRV and SUSHI tokens were in high demand at the time, so I swapped MATIC to CRV and SUSHI. CRV was paying over 50% APY. 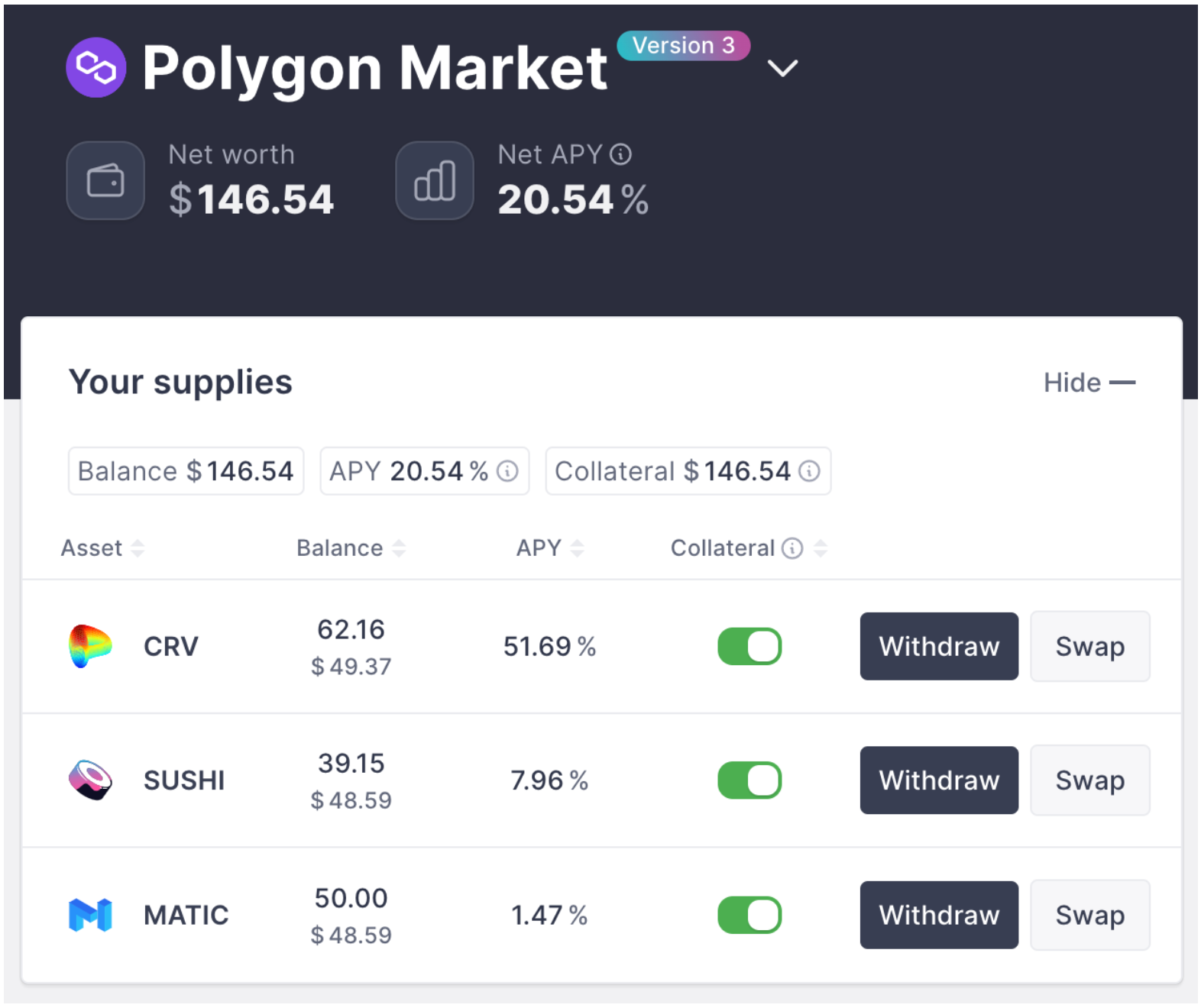 In the background, Aave replaces your tokens with an Aave-specific equivalent token, such as aWMATIC (Aave wrapped MATIC) or aCRV (Aave CRV). When swapping, Aave offered to add the new tokens to my MetaMask wallet.

When supplying (lending), your token balance increases to reflect your earnings while the per-token price updates in real time.

I wasn’t able to find a report to view earnings, however. A visit to the Discord channel suggested that many investors track the starting and ending token quantities on a spreadsheet. Take notes when you start a position.

The tokens you supply on Aave become collateral for borrowing if you take a loan. Most assets can be used as collateral, but some are restricted, including Tether (USDT). 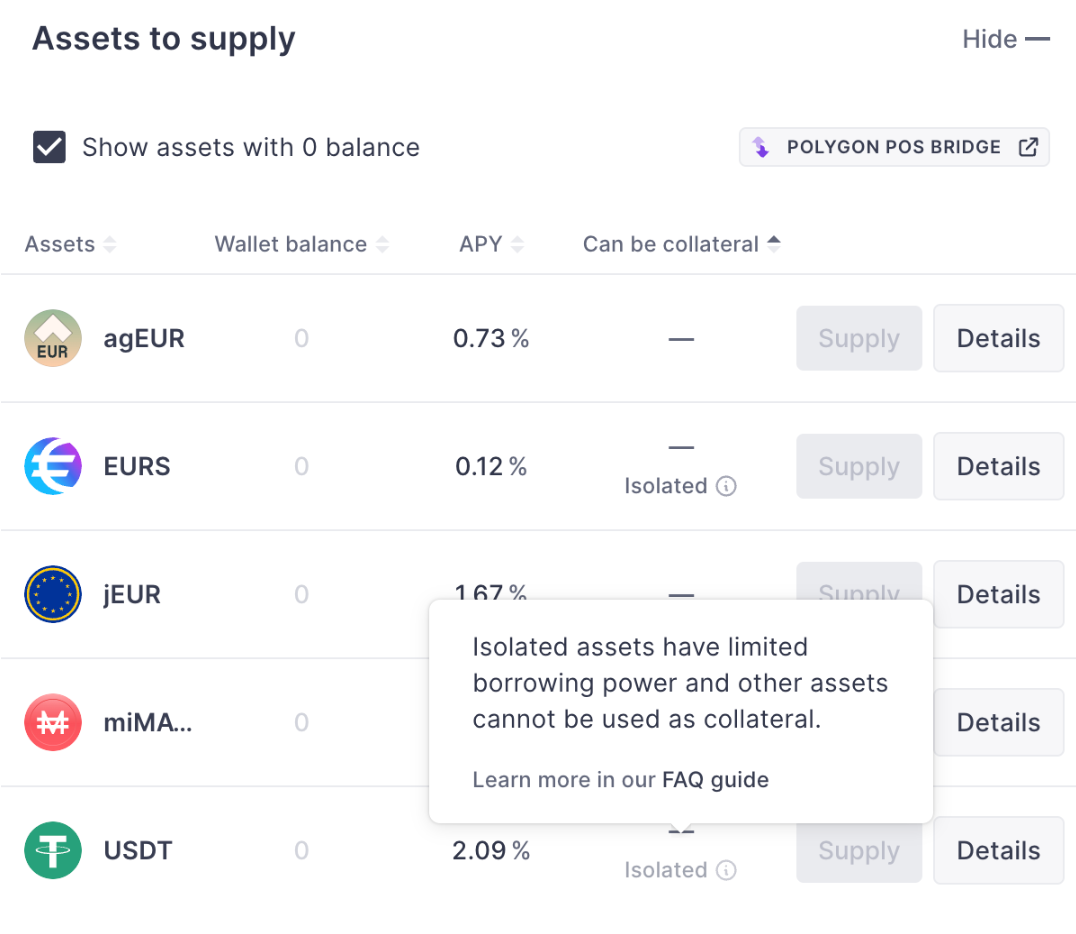 A low-interest rate might not stay low, and variable borrower rates of up to 100 APY% or more are possible.

Using volatile assets as collateral is riskier because your collateral may be liquidated due to changes in market price, which then results in a liquidation penalty of 5% to 10%.

Loan-to-value (LTV) limits also differ from token to token. The Max LTV for DAI is 75%, whereas the Max LTV is only 20% for SUSHI.

I borrowed DAI, and Aave gave me the option of a stable rate or variable rate. You can change this selection throughout the course of the loan. The new loan appeared at the top of the dashboard, along with an update to my “health factor.”

Aave assigns a health factor to accounts with loan balances based on the LTV and liquidation risk.

My “net worth” also decreased by the amount of the loan.

Loan repayments are intuitive, and Aave gave me the option of paying my loan with the borrowed asset or with collateral.

You can repay in full or in part, or not at all. Interest on the loan accrues according to the utilization rate for the token you borrow. There’s no fixed repayment schedule, but interest will chew away at your LTV until you repay or the collateral is liquidated.

If I had to choose my least favorite part of Aave, it’s staking.

By staking the Aave token, you can earn a variable yield based on how much Aave is staked. But you have to stake on the Ethereum network. The Ethereum blockchain bases fees on the complexity of the transaction. Aave’s staking smart contract is complex, resulting in higher gas fees and making Aave staking a pricey proposition if you aren’t staking large amounts.

Staking in Aave’s “Safety Module” helps cover deficits if the market moves too fast to liquidate collateral for positions. Staked amounts can be slashed by up to 30% if needed to cover shortfall events.

Staking on Aave acts like a type of insurance. The stakers become insurers and make money – until there’s a loss. Staked amounts can be slashed to cover shortfalls on Aave. 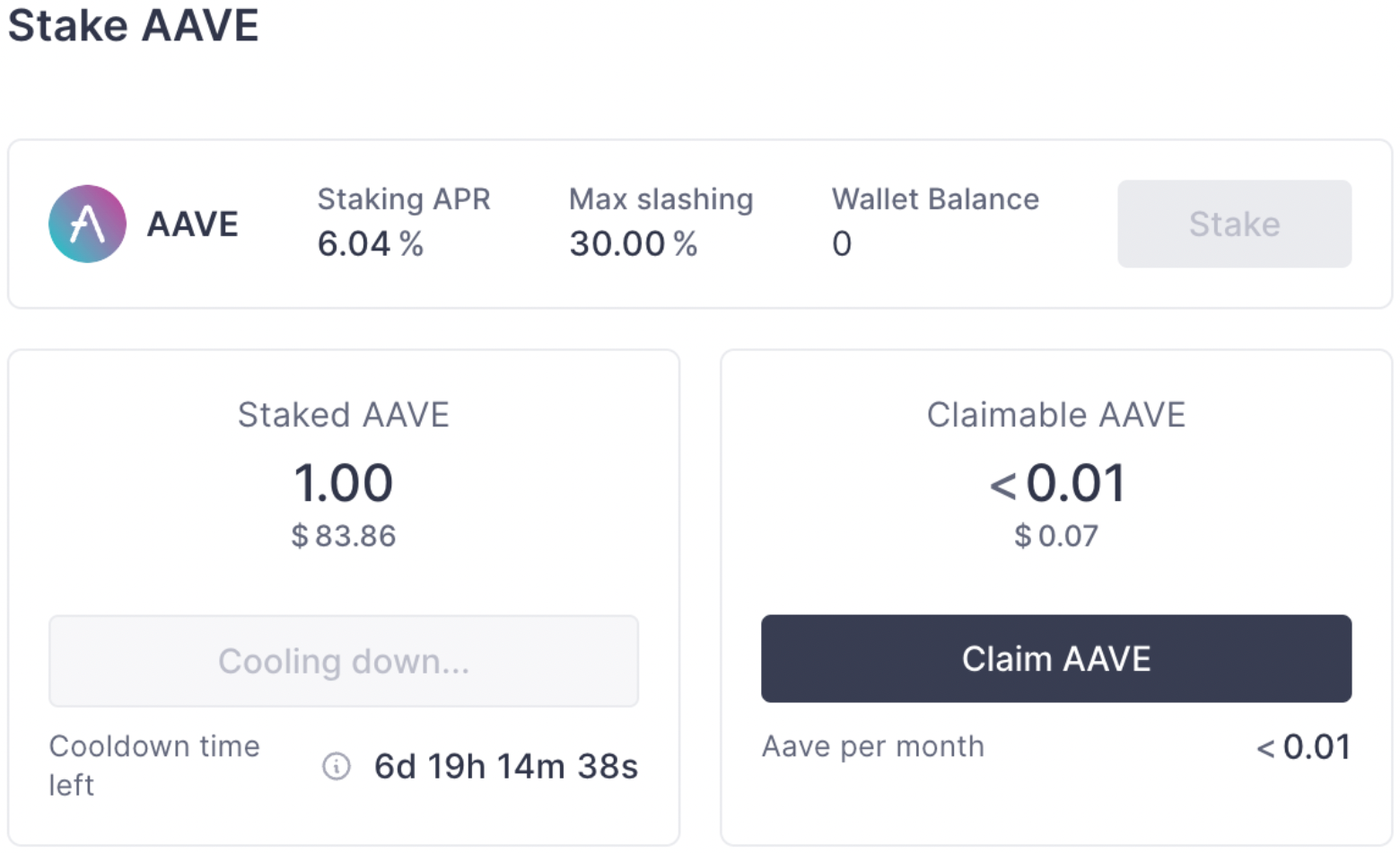 There’s also a 10-day cooldown period, after which you have 48 hours to unstake before you have to start the process again.

Aave’s swaps are powered by ParaSwap, a decentralized exchange (DEX) aggregator that finds the best exchange rates from several DEXs. A preview panel for each swap allowed me to adjust the quantity and slippage (price range). The estimated fees for the swap matched the cost in my MetaMask wallet closely.

Swaps are limited to the assets supported by Aave on the blockchain you choose. Expect a narrow selection.

After a long day of chasing unsustainable yields, I wanted to withdraw my new-found riches. The process was simple. When withdrawing CRV, Aave automatically converted aCRV to CRV, depositing the CRV tokens into my MetaMask wallet.

But it may make sense to swap your high-yield tokens for tokens you want to hold before you withdraw, especially if you wandered into the weird-token weeds like I did.

To Sum It Up

Aave Version 3 offers a powerful way to lend or borrow, but the protocol’s liquidation process asks that you borrow responsibly. With a liquidation penalty of up to 10%, more than the loan balance is at risk. On the supply side, you’ll find a wide assortment of tokens paying varied yields, with the ability to swap to another token in a few clicks.