There’s no question that Bitcoin is in a league of its own when compared to the other 20,000+ known cryptocurrencies that are available to investors and crypto enthusiasts. Built exclusively for Bitcoin, the Electrum Wallet offers a time-tested way to protect your Bitcoin while providing open-source apps for PC, Mac, and Linux, as well as Android devices.

With support for hardware wallets, multi-signature security, and even cold storage, the Electrum Wallet means business when it comes to protecting your Bitcoin. It can be used to control transaction fees, stay in sync with dozens of servers that mirror the blockchain, and leverage security features, such as cold storage, that are difficult to duplicate elsewhere.

Founded when Bitcoin was still a twinkle in the eyes of investors back in 2011, Electrum is an open-source Bitcoin-only wallet that was released under the MIT License. This means Electrum is free to use and the code is open to review. It also means other projects can fork the Electrum code, as nearly 3,000 have already, to build a similar wallet for Bitcoin or other cryptocurrencies. Be sure to download Electrum from the official source.

A hefty number of today’s crypto wallets either place the focus on Ethereum and its vast universe of ETH-based tokens or on supporting several types of crypto. A large number of those wallets also use closed-source code. That leaves users to wonder what’s happening under the hood, whether the wallet phones home, and whether there are yet-to-be-revealed security concerns.

Electrum takes a different direction, however. What makes this wallet a standout against the competition is that it focuses on making Bitcoin’s built-in security superpowers — such as multiple signatures (multisig) and cold storage — easy to access. Unlike other wallets, Electrum won’t connect to the latest decentralized applications or enable trading on decentralized exchanges.

Think of Electrum as a discreet-yet-stable Bitcoin-only wallet with a full suite of features. While Electrum won’t win any beauty pageants, its reliable security features make Electrum a must-have for serious Bitcoin investors.

How does Electrum work?

The Electrum Wallet lets you start a new wallet or import an existing Bitcoin wallet. You can also store multiple wallets within one installation of Electrum. But one of the most attractive features is Electrum’s ability to build a cold storage wallet with private keys that never see the internet until you’re ready.

While some other Bitcoin wallets, such as Bitcoin Core, require you to sync the entire blockchain, Electrum instead syncs to a trusted army of servers. This structure makes Electrum useful as both a PC or Mac-based wallet as well as a mobile wallet. However, only Android is supported for mobile use so far. There’s no app for iOS yet.

Electrum offers a powerful solution to the significant challenge with securing your Bitcoin stash. As a tradeoff, some of the features can be less than intuitive. Fortunately, Electrum’s documentation is second to none, and in this case, the pros may outweigh the cons for most users.

Connect to hardware wallets or use as cold storage

Not always easy to use

Like many open-source projects, Electrum does one thing and does it well. In this case, that one thing is Bitcoin storage and transfers, but Electrum anticipates nearly every need within this specialized use case. From cold storage to multi-platform support to fast (and cheap) Lightning Network transfers, Electrum is up to the task.

If the private keys to your wallet fell into the wrong hands, it’s game over. Whoever has the keys can send your coins anywhere. Electrum offers a secure way to build a cold-storage wallet for which the keys are never exposed to the internet.

You can use the Tails operating system to make a cold storage wallet with Electrum. Tails OS runs off a USB memory stick and can be configured to save your data from one use to the next — or to forget everything. Electrum is pre-installed with Tails, so no extra download is needed.

You’ll also find a handy slider in the app that allows you to reduce costs further if you’re not in a hurry for settlement. Lower fee transactions can take longer to complete, but will cost a lot less in many cases.

If you own a Ledger, Trezor, or Coldcard hardware wallet, you may be relieved to find that the Electrum Wallet supports all three device types. You can even use more than one hardware wallet in conjunction with a wallet file to set up multisig authorization. For example, you can set up your multisig to require two out of three devices to authorize a Bitcoin transaction.

The concept is similar to the multifactor authentication you might use with banking apps, adding an extra layer of security.

Electrum’s drawbacks are few, and in most cases, reflect use cases for which Electrum wasn’t designed.

Doesn’t support Ethereum or other altcoins

For example, Electrum doesn’t support Ethereum — or any other altcoins. If you need a wallet for ETH and other cryptos, you can consider Trust Wallet, MetaMask, or Coinbase Wallet. If you find the Electrum app for another crypto, be aware that the app is likely a fork of the original. Electrum only supports Bitcoin natively.

It wouldn’t be fair to call Electrum difficult to use. For most tasks, it isn’t. But before accessing some advanced features, it can be helpful to read the directions.

For example, Lightning Network channels require setup, and the process isn’t self-explanatory. But because Electrum has a decade-long history as a trusted tool, you’ll be able to find numerous walk-throughs online, in addition to the official docs.

How to set up your Electrum

To download Electrum, it’s best to use the official download links for PC, Mac, or Linux. However, some Linux distributions, such as Fedora and Debian, make Electrum available through their repositories. To install on Android, you can search for Electrum in the Google Play Store, although Electrum also offers 32b-bit and 64-bit APK files for direct installation.

Once you’ve installed Electrum, you’re ready to build your wallet. For most users, a standard wallet makes a good starting point. You can always build additional wallets with advanced features after you’ve learned the basics. 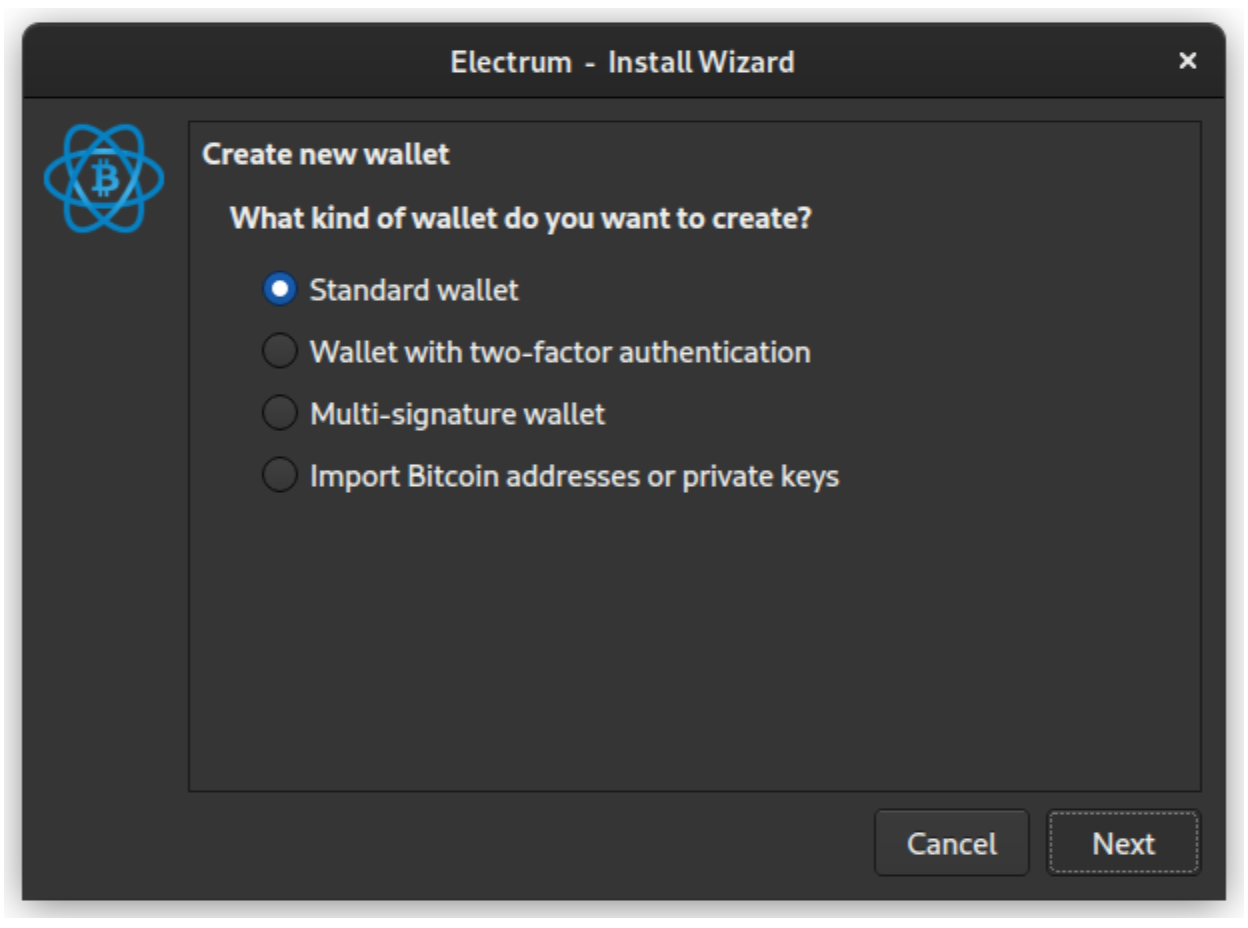 Electrum walks you through the set-up basics, like choosing a password and making sure you’ve written down the 12-word seed that secures your wallet.

If you’re using a cold wallet, you’ll get a notification whenever you open the wallet.

You can set up receiving addresses that expire within 10 minutes, an hour, a day, a week, or never. Electrum can display the receiving address as a QR code that you can read with other wallets, including other installations of Electrum.

After you send money to your wallet, you can track the blockchain verification in the history tab. You’ll also be able to see transaction details, such as cost.

Step 3: Add your wallet to other devices

With Electrum’s support for cold wallets and cross-platform apps, you might want to install Electrum on multiple devices, such as a computer and a phone or tablet. In any Electrum app, the clickable name of the wallet or the Wallet menu opens a dialogue to scan a QR code or copy/paste a public key for watch-only wallets. 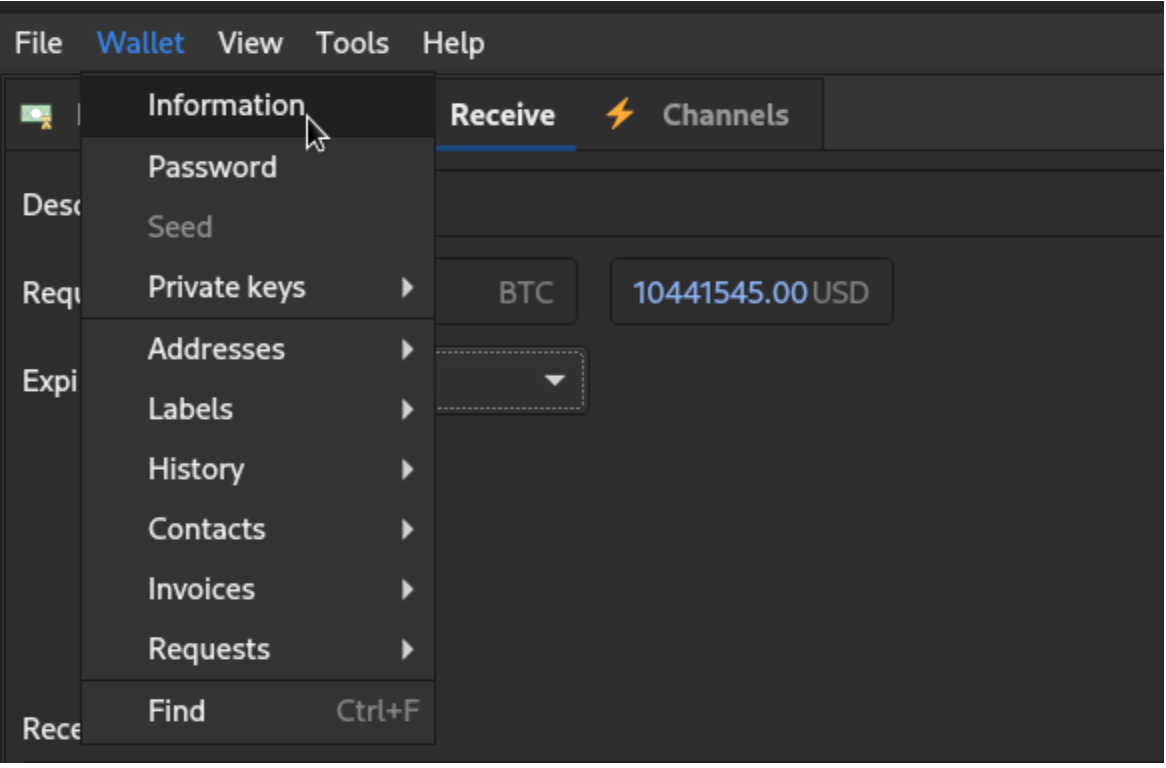 For hot wallets, you can use the 12-word seed to restore the wallet to another device.

Multi-coin wallets are convenient, but when you have more to protect, it makes sense to use a security-focused Bitcoin wallet like Electrum. Electrum puts a lot of power at your fingertips, including the ability to build cold storage or enable multisig security.

At some point, though, you’ll want to read the documentation to discover the full capabilities of Electrum. You might even wonder why you didn’t start using Electrum sooner.